God is in the detail (part xxi)

As the series draws to a close, the conspiracy theories come thick and fast. What’s Missy’s endgame? Is Danny really dead, or has he just had an out-of-body experience, like Bill Cosby in Ghost Dad? And how did Clara’s face get so improbably round?

Two GIITD posts to do before Saturday. Let’s start with ‘In the Forest of the Night’. Here’s Trafalgar Square. 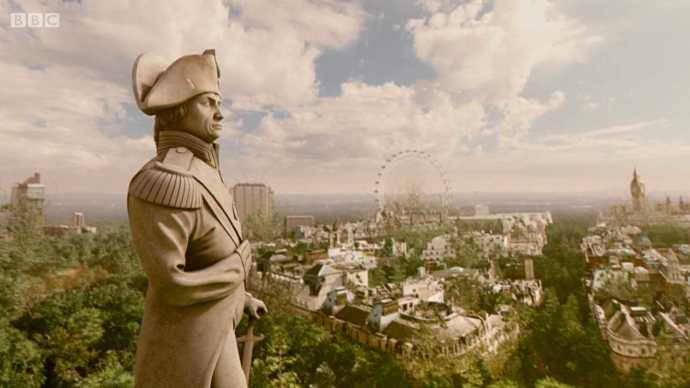 Things we can observe here: first, have a look at Nelson. Significantly, Nelson is missing his right hand, which he lost at the Battle of Santa Cruz de Tenerife in 1797, along with most of the arm attached to it. Viewers of New Who will recall that the Tenth Doctor also lost his right hand in a battle with the Sycorax commander, above the Earth on Christmas Day 2006.

Tenerife is in the Canary Islands, which ostensibly means nothing, until you remember that the Tenth Doctor fought the battle of Canary Wharf, which he won, although it led to the (temporary) loss of Rose. This all points towards I. Nelson Rose, author and world expert on gambling and gaming law, and also the Horatio Nelson Rose, the sort of thing that Harrison Chase would have in his collection.

And significantly, Harrison Chase encountered the Fourth Doctor. THE FOURTH DOCTOR. Conclusions? We’ll meet the Curator again, inside a casino.

It gets better. The digits in 1797 can be rearranged to form 1977, which was the year that the Brigadier ran into Nyssa and Tegan at Brendon Public School. Things get really interesting when you rearrange the letters in ‘Battle of Santa Cruz de Tenerife’ only to get ‘Abacus trident zealot efferent’, a CLEAR AND UNAMBIGUOUS reference to Kate Lethbridge-Stewart’s plan to drag UNIT away from its occasionally violent past, as well as her father’s teaching career in ‘Mawdryn Undead’.

Curiously, you can also see the London Eye, which itself has an eye on the (unseen) National Gallery, which featured in ‘Day of the Doctor’, which also starred David Tennant. I leave the conclusion to you, dear reader.

Let’s move on. Introducing Clara Oswald, Lord of the Rings. 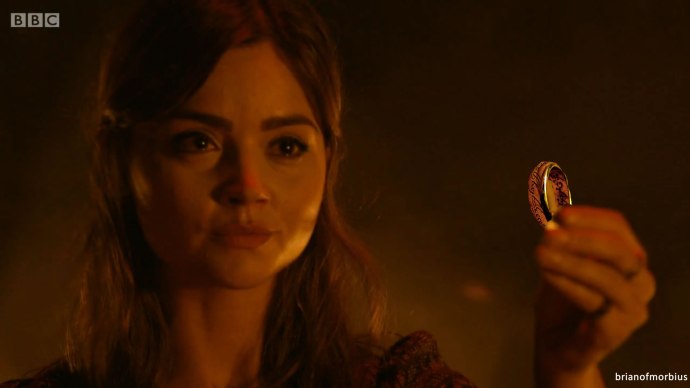 Sorry. I mean this. 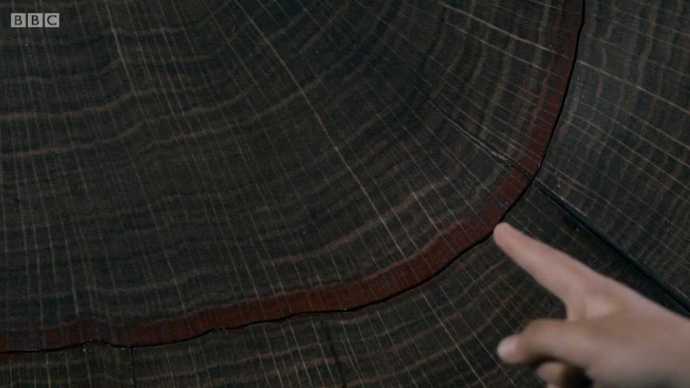 The number of vertical lines in this picture is 63, the year Doctor Who started. The number of horizontal lines is 26, the total number of Doctors if the Doctor ends his life at the end of this regeneration cycle. Significantly, the large red line is THE TENTH ONE UP. Perhaps Tennant got to be ginger after all, even if it was only in a tree.

63 multiplied by 26 is 1638, the setting for ‘Silver Nemesis’, WHICH INCLUDES THE CYBERMEN. Even without the publicity for ‘Death in Heaven’, only an idiot couldn’t have seen this coming.

Trees figure significantly in ‘Mark of the Rani’, in which – 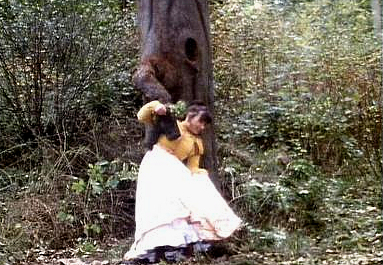 If I’d been writing this before ‘Dark Water’, I’d have concluded that MISSY IS ACTUALLY THE RANI. However, seeing as Moffat’s put that one to bed, we may now theorise that THE RANI IS RETURNING NEXT YEAR IN THE BODY OF A MAN. My money’s on Ross Kemp. 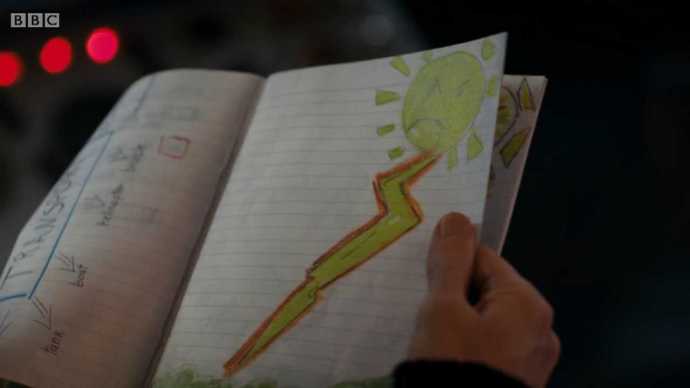 “We were supposed to draw a picture,” says Haley Joel Osment in The Sixth Sense. “Anything we wanted. I drew a man. He got hurt in the neck by another man with a screwdriver. Everyone got upset. They had a meeting. Mom started crying. I don’t draw like that anymore.”

Sorry, I copied down that quote fifteen minutes ago, and then got distracted watching YouTube videos of Haley Joel Osment. Where were we? Yes.

However, we may also look at ‘Day of the Doctor’, which includes THE TENTH DOCTOR, but also a cameo by Tom Baker. Baker’s first adventure was ‘Robot’. And in order to deal with the rogue lump of metal causing havoc around the English countryside, the Brigadier (mentioned earlier) deploys a tank.

AND THE WORD TANK IS PRINTED IN THAT PICTURE.

Lastly: you will recall that the opening of ‘Day of the Doctor’ sees the TARDIS airlifted to The National Gallery (which we’ve already discussed) by helicopter. AND THE WORD HELICOPT-

Categories: God is in the Detail | Tags: day of the doctor, doctor who, doctor who series 8, entertainment, in the forest of the night, peter capaldi, science fiction, television, twelfth doctor | 1 Comment

One thought on “God is in the detail (part xxi)”