One of our favourite topics of conversation over dinner is “Doctor Who meets…”. Such discussions are typically instigated by Joshua, who will say something along the lines of “What would happen if the Doctor met Postman Pat / the Ninja Turtles / Bob the Builder?”. And that launches a sea of ideas about the Doctor finding out the Ninja Turtles really are aliens (which would annoy the fans no end) or being attacked by a possessed Spud. It’s derivative, but it stops them from fighting over who gets the ketchup first.

Gareth has his own theories about Pat. “Postman Pat is clearly a disguise of the Master’s,” he once told me. “It’s rather blatant if you think about it. His TARDIS blends in well as the van.” I did consider that the only Doctor who was going to be able to integrate himself within the rural community that is Greendale was going to be the Ninth, which was difficult because he’d apparently only travelled with Rose – and that in turn led to our having a discussion about Christopher Eccleston’s hair.

The most popular crossover, however, is the Whoniverse as inhabited by the members of Mystery Inc. Because Scooby Doo, as we’ll discover, is very similar to Doctor Who. It has a gang of adventurers travelling around to a series of interesting and varied locations, tampering with local legends and generally making a nuisance of themselves. There’s always a localised threat by a monster who’s not what he appears to be. And there’s always a lot of running. The differences only really become apparent come the final reel, as this Facebook discovery shows.

Scooby Doo’s branched out before, of course – as early as 1972 he was rubbing shoulders with the likes of the Three Stooges and Cass Elliot in The New Scooby Doo Movies. By far the best of these were the episodes with Batman and Robin, if only because the straight-laced dialogue echoes the 1960s TV series. (When Robin becomes momentarily spooked by a sequence of ghostly noises, for example, it’s left to the Caped Crusader to point out that they are “Merely sound effects, Robin, recorded on tape by talented professional thespians”. Oscar-winning material this is not.)

The dog and his upright companions have been much lampooned over the years – Buffy the Vampire Slayer is, to all intents and purposes, Scooby Doo in California, and the fact that the gang refer to themselves as “the Scoobies” (which Xander, on one memorable occasion, not-quite rhymes with ‘boobies’). Just after the millennium turned, Jay and Silent Bob got high with them. But if you want a neat little summary of the show, you could do a lot worse than this.

Sadly, the golden age of Scooby Doo is long-gone. Most die-hard fans will tell you they lost their patience at the introduction of Scrappy Doo in 1979, but while it’s easy to hate the stunted canine it’s also easy to forget that the show was suffering in the ratings department when he was brought in. For me, the turning point was The 13 Ghosts, which featured the gang (well, three of them) battling real ghosts – in the same way that they would in 1998’s Zombie Island – which seemed to somehow undermine the whole point of the show. Mind you, the most recent incarnation of the show featured a scene in which Scooby was being chased by Cthulhu. It was at this point that I realised children’s TV had lost some of its innocence.

Less recently than that, but still within the last decade or so, What’s New Scooby Doo? has tried to emulate the formula and style of the original Scooby Doo, Where Are You?, right down to the songs, and with some success. Unfortunately, far too many of these stories suffer from featuring well-intentioned ‘villains’ who only used monstrous disguises to frighten away seedy developers or avoid ecological disasters. Endings are a question of sorting out the misunderstanding rather than jailing the crook, and the “snooping kids” line barely gets a look in. The writers seem to know that it’s past its prime, as epitomised in an episode when Scooby performs a daring leap on a motorcycle over a pit full of hungry great whites, prompting Velma to comment “I never thought Scooby Doo would jump the shark”.

Still. The thought of Fred and the gang in the TARDIS. The possibilities are endless. You could have Shaggy exclaim “Like, how are you doin’ this?”, and the Doctor could reply “It’s bigger on the inside. You know, sort of like your stomach.” Velma could work with Zoe, and they could argue over which of them was better with a computer. And you could have Scooby Doo hide inside a Dalek, trundling around Skaro, bumping into things, exclaiming “REX-RERMIRATE!”.

But you can extend the metaphor further, and it’s possible to replace every character in Mystery Inc. with a Whovian counterpart if you exercise your grey matter a bit. I was ruminating on this one day last week, when out of the blue and with no prompting whatsoever, Gareth sent me something he found on online.

And then this, which is not as good, but will at least satisfy the newbies who have no idea who Leela was. 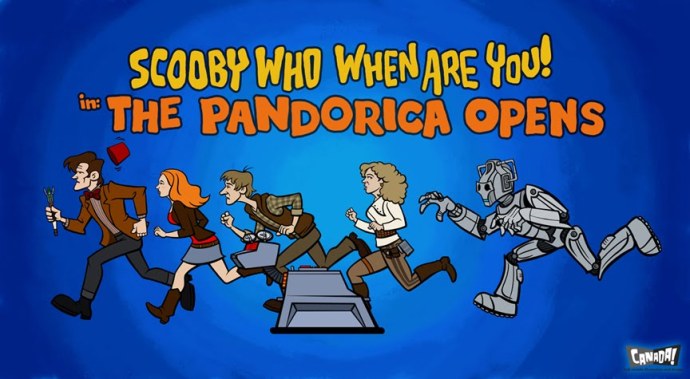 See? This is what the internet is for. Not those wretched cat videos. Not making stupid comments on Twitter that you only delete after they’ve been picked up by several national newspapers. It’s the joy of sharing something creative and fun. Now if only I can get DC to pick up my option for Scooby Doo Vs. The Punisher.