There are a number of pointless things I’ve seen this week. SJ sent me the first. 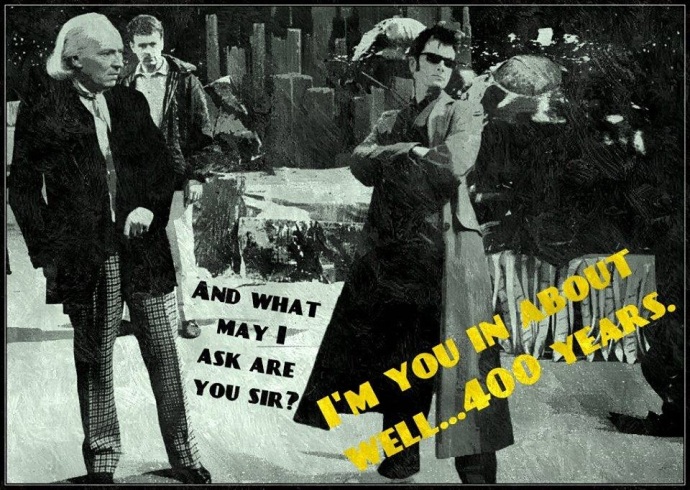 We are both in agreement that it’s quite hideous. It says nothing, except that the First Doctor was bristly and the Tenth Doctor was arrogant and obnoxious. It’s badly composed – one of those filtered Photoshop jobs designed to look cartoon-like, but the font placement is a disaster. I’m at a loss as to why you’d come up with this sort of thing. If you’re reading this, and you happen to have created it, perhaps you could get in touch to let me know what the hell you thought you were trying to achieve. And then you can stay in during morning break WHILE YOU THINK ABOUT WHAT YOU DID.

(Update: Gareth has pointed out the lack of commas. “Hartnell is presumably saying ‘And what, may I ask, are you?’, but he seems to be asking what he’s allowed to ask.”)

SJ has also been delving into the depths of fan conspiracy, and found proof that certain people shouldn’t be allowed to use the internet.

Look, you’re entitled to your opinion, but you’re wrong. I suggest you go and argue with this person, who has written TWO AND A HALF THOUSAND WORDS on why Missy is actually the Rani. It has bullet points and everything. I didn’t get to part two. I didn’t even notice there was a part two at first, because by the time I reached the end of part one my brain was basically soup. The funny thing is I produce the God Is In The Detail posts in other to satirise these things, but I sometimes wonder why I bother, seeing as they do such a great job of satirising themselves, whether they mean to or not.

On an apparently unrelated note, I’ve also been reading about Twitter pranks directed towards famous people. The NME (among others) reports that Billy Ray Cyrus was sent a photo of Jimmy Savile, with requests for a message for his “grandad”. Cyrus, who presumably had no knowledge of Savile or what he had done, then retweeted the message, causing much hilarity amongst the snooty left.

Meanwhile, Donald Trump also fell victim, after getting this:

Hi @realDonaldTrump. My parents who passed away always said you were big inspiration.Can you pls RT for their memory? pic.twitter.com/veBxFNXnOd

I can sympathise with Trump, who presumably retweeted for one of the following reasons:

– He didn’t know who the Wests were (for which I’d forgive him; he’s American)

– He didn’t know what they looked like (for which I’d also forgive him; they’re not exactly distinctive)

– Neither of the above applied, but he thought “Oh, these two look vaguely like a couple of serial killers from twenty years ago, but that’s probably just a coincidence”.

“I don’t really see the point of those kinds of tricks,” said Gareth. “It’s the sort of humour that Chris Morris used occasionally, tricking celebrities who were either too old to know the current slang or not from the right country. E.g., he was talking to Claire Rayner, asking her whether she would beat off muggers who tried to attack her.  She said yes.  He said “so, you would beat them off”.  She said yes.  Much mirth.  Utterly dull.”

Susanna Reid, of course, fell victim to just that quite recently – entirely of her own volition – when this happened:

Reid isn’t off the hook, because (forgive the expression) she’s young enough to know better. Of course, it’s possible she knew exactly what she was doing, and the whole thing was a hit-grabbing publicity stunt. I genuinely can’t tell these days. I’m mystified as to why, because all it proves is that she doesn’t know her slang, but heaven knows they could use a ratings boost.

@OldRoberts953 – hello, it's my grandmother's birthday, and she's a huge fan of yours. Any chance of a retweet? pic.twitter.com/HU156An3Z0

He got the joke, although I can’t help feeling he’d be less amused had he read my review of ‘The Caretaker’…

You think whinging and moaning about the Doctor Who anniversary special is a new thing? Think again.

(Thanks to SJ for showing me this one.) 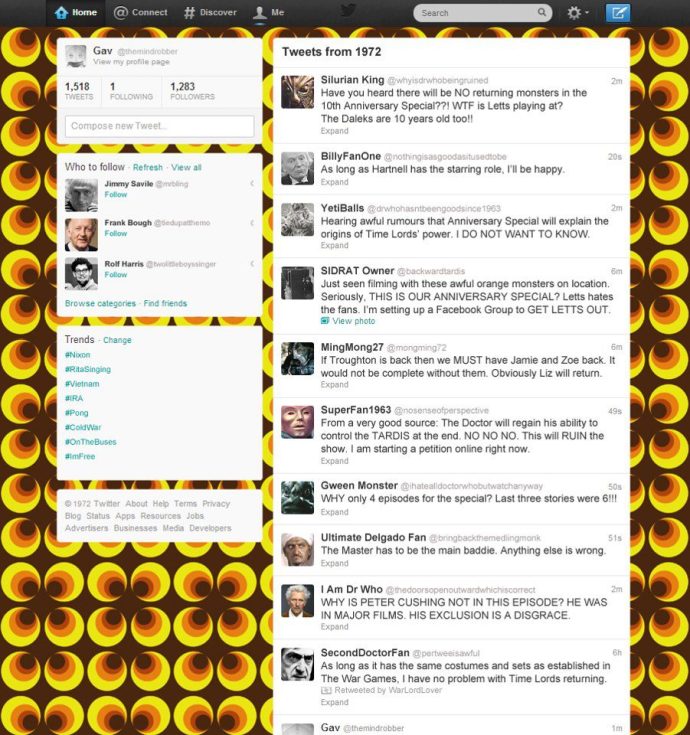