Posts Tagged With: the lion king

Have I Got Whos For You (Disney special)

I seem to have far more doctored images and bad jokes than I generally get round to posting in here. In many ways that’s a good thing – if your content creation ratio outweighs your posting ratio then you usually have a surplus, which is great if there’s a famine round the corner (or in my case, a holiday). But I’m mindful of the fact that there are a number of memes sitting on my hard drive that just haven’t been posted yet. And while it’s good to be in a Seven Years Of Plenty kind of place, I might as well use the downtime between series to catch up a bit.

Today’s batch is – you’ll have seen – all Disney-related, beginning with the news that WALL-E is about to have a very, very bad day.

Elsewhere, the Potts gang are having a lovely time of things, until the Eleventh Doctor drops in. 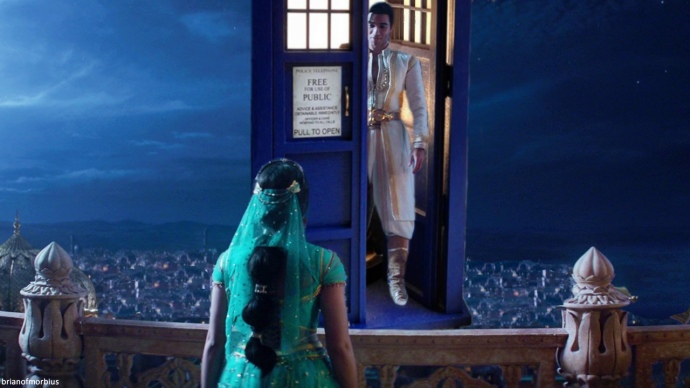 Fan theory: a new explanation for the breakdown of Amy and Rory’s marriage. 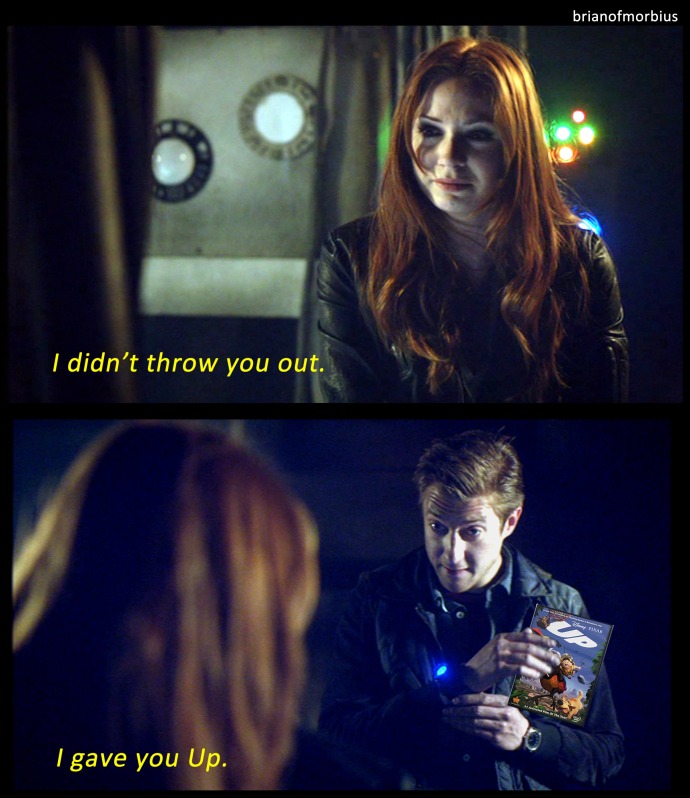 The Tenth Doctor wonders if this might be a good spot to surreptitiously ditch his new companion. 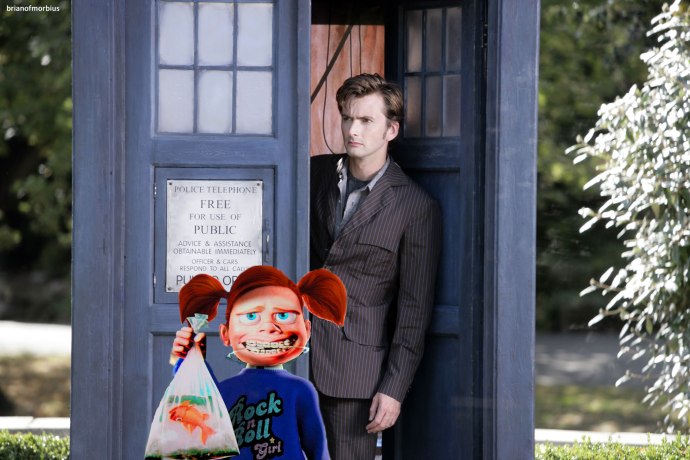 And the Mulan remake opts to recreate the opening of ‘Day of the Doctor’.

Over in the pridelands, alternate dialogue recorded for The Lion King foreshadows the final words of the Twelfth Doctor.

There are scenes of general dismay when Bill Potts returns home to visit her family.

The cast of Monsters, Inc. watch a video. 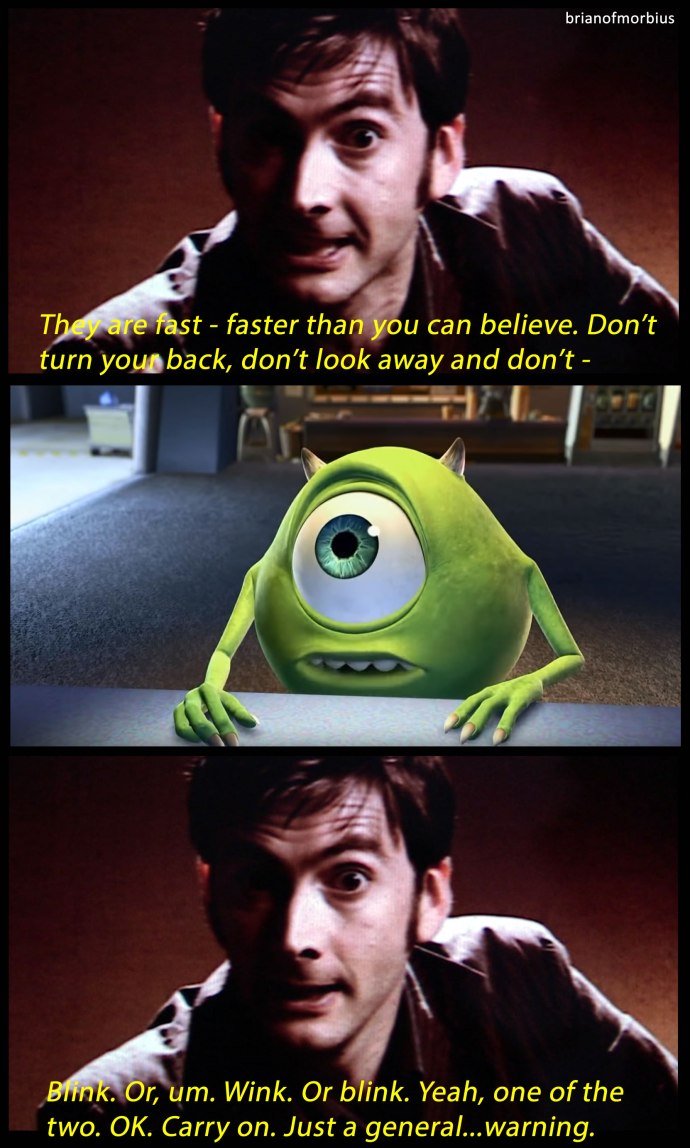 “One jump ahead of the Dalek…” 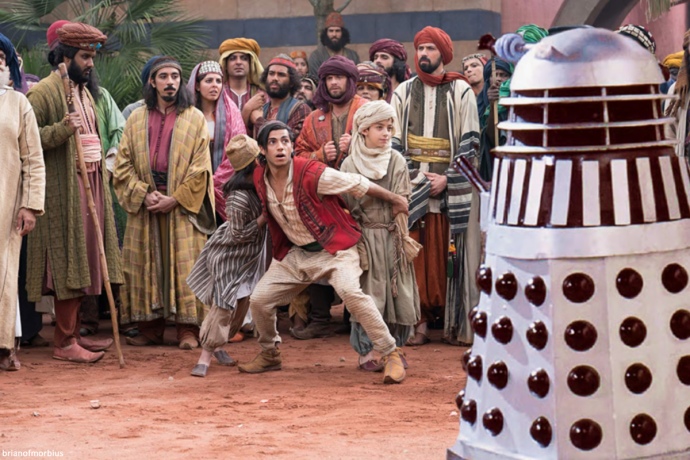 And finally, as news of The Little Mermaid splashes across the internet, the Doctor confesses she’s really not sure about this new aerial. 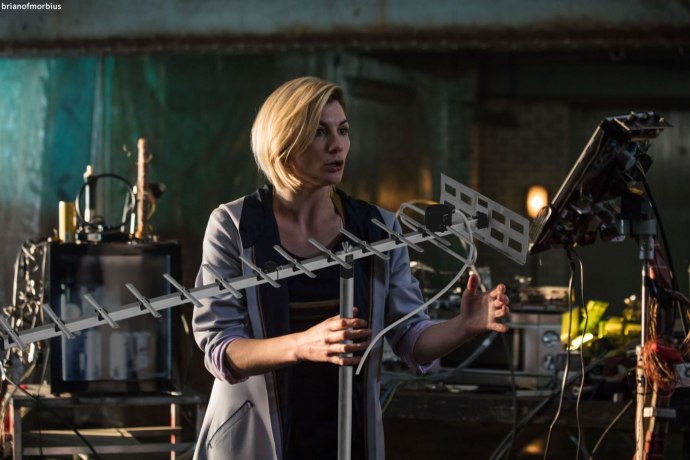 This week in Whovania: in Mashups We’d Like To See, here’s Harry and his Bucketful of Dinosaurs on a Spaceship.

A leaked promotional still from the BBC reveals what actually happened after the end of ‘Boom Town’.

And here’s a never-before-seen publicity shot of Count Olaf, Robbie Rotten and the Master looking for disguises in a costume shop.

Well, even supervillains have to go shopping, right?

Like Loading...
Categories: Have I Got Whos For You | Tags: a series of unfortunate events, boom town, count olaf, dinosaurs on a spaceship, doctor who, eleventh doctor, harry and his bucketful of dinosaurs, lazytown, lemony snicket, ninth doctor, robbie rotten, slitheen, the lion king | Leave a comment

How The Wizard Of Oz should have ended, if everyone had stopped to think for a minute

Author’s note: this is an old post from a different blog that’s now privacy-controlled. It goes in here because…well, because it goes in here.

A couple of years ago, my friend Rachel posted about The Lion King. Her alternate ending is frankly wonderful, if nothing else because it finally explains exactly why Simba feels responsible for the death of Mufasa – he thought he’d started the wildebeest stampede. And yes, I know you knew that, but I didn’t. And yes, that’s monumentally thick. I’d missed the woods for the trees. Decades of watching that over and over, learning the songs (and even the orchestrations) by heart, and I’d never even noticed. I just thought Simba blamed himself because he was in the wrong place at the wrong time. Missing the obvious has always been one of my character flaws.

Anyway, this set me thinking, and I’d like to talk today about The Wizard of Oz – a film we watched just the other week, at Daniel’s insistence, and a film which, while I know it more or less off-by-heart, has always bothered me. It’s only partly to do with Wicked– which, as you may be aware, will completely change the way you look at The Wizard of Oz, and which neatly solves the mystery of why a witch with a chronic allergy to H2O would keep a bucket of water in the middle of a walkway where someone could easily trip over it (never mind the melting, what about slippery floors?). No, it’s the ending of Oz that I’ve never really understood. And rather than explain why in a load of preamble, we will instead jump straight into The Emerald City, just after the Wizard has sailed off in his balloon. Cue Glinda.

Glinda: You don’t need to be helped any longer. You’ve always had the power to go back to Kansas.

Scarecrow: Then why didn’t you tell her before?

Glinda: Because she wouldn’t have believed me. She had to learn it for herself.

Dorothy: Hold on. What the hell?

Dorothy: [hesitantly, but with growing menace] You…knew…all this time…that I could get back…by myself. Without you. And you…didn’t…tell me.

Glinda: You wouldn’t have believed me.

Dorothy: You didn’t even try!

Glinda: Well, no, because it was your journey that was important. You didn’t really want to go back at first, did you? You wanted the adventure.

Dorothy: No I didn’t! What, you’re going to give me some sort of Joni Mitchell shit about how I couldn’t appreciate home until I had to leave it?

Dorothy: The cyclone taught me that, Glinda. The cyclone. All I could think of up there was Kansas. I was borderline concussed. I experienced levels of nausea that I don’t think have been scientifically documented. Then I landed in Midget central and I just wanted to go home again. And instead of helping, you let me go through hell to get this far. I had apples thrown at me. I was drugged. The monkeys carried me by my hair!

Glinda: My dear, I’m so sorry. But you see, you had to go through that to realise –

Dorothy: TO REALISE WHAT? To realise that you’re a horrible person? Jesus, you’re worse than the witch. And she wanted to cook my dog!

Glinda: But you defeated her. As I knew you would. And now you’re safe and sound, and you can leave these fictional constructs behind.

Scarecrow: Hold on, hold on there. Just a minute. I’m a construct?

Glinda: Why, of course you are. When Dorothy wakes up she’ll be back in her farmhouse in Kansas and no one will believe this will have happened. She’ll have years of therapy which will bankrupt her aunt and uncle, but think of the book deals!

Glinda: No, you’re doppelgangers. You look like people she knows, but you’re a figment of her imagination. You’re the farmhands. Although here you’re the parent figures she doesn’t feel she has in her Aunt and Uncle. Except for the Lion, who appeals to her maternal instincts.

Lion: Gee. This didn’t happen in the book.

Scarecrow: No, in the book you unambiguously go to and return from Oz. Eventually you ship your family out there. This ending’s only minimally ambiguous.

Tin Man: The weird part is, I don’t think anyone’s gonna care about such a colossal change.

Scarecrow: The film has basically usurped the popularity of its source material. The songs, the quotes, the costumes – they’ll last for decades. It means this catastrophic deviation will be held in far less contempt than the changes in, say, Lord of the Rings. Oh joy, this placebo brain is wonderful!

Dorothy: And the witch? I suppose you’re going to tell me she’s Miss Gulch, aren’t you?

Dorothy: Who will still kill my dog?

[She socks Glinda on the jaw.]

[She starts to fade from view.]

Dorothy: Oh, Glinda – one more thing. Is this really happening in my head, or is it real?

Glinda: Of course it’s happening inside your head, Dorothy. But why on earth should that mean it isn’t real?