Have I Got Whos For You (statuesque edition)

“For god’s sake, Danny, stop urinating on them.”

It’s been a week of (self) righteous anger. The ‘self’ is optional; you can put it on if you like. The world we live in is one in which no sin goes unpunished, no tweet unmocked; a world in which armchair judgement has become second nature. No one is safe: it doesn’t matter if it’s angry protesters throwing statues in the river or multi-millionaire authors throwing their weight around. 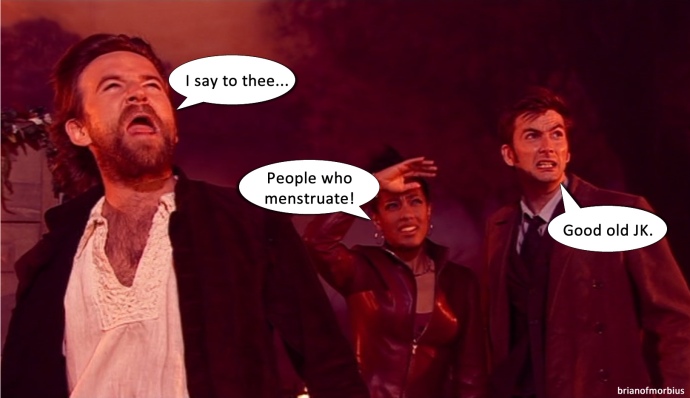 It’s dull, and I’m tired of writing about it, so let’s look at this week’s news roundup. There are troublesome scenes in central London when Missy can’t remember where she parked her TARDIS.

And on a routine visit to a parallel Earth, the Doctor and Rose are unsettled when they run into a queue for the re-opening of Primark. 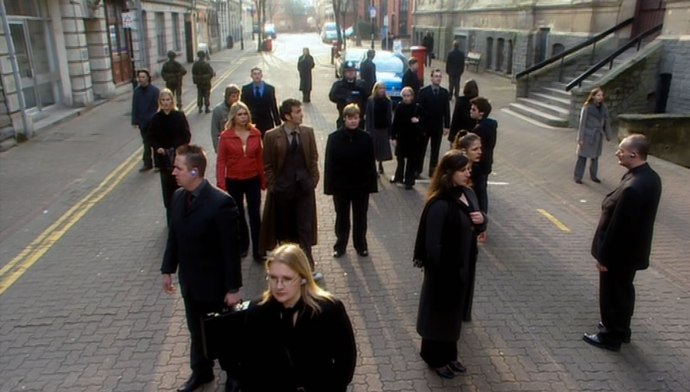 Meanwhile, as fury reigns over the expungement of classic episodes and series from on-demand services, a trawl through the Gallifreyan Matrix reveals that even the Time Lords have grown concerned over sensitive content.

In Surrey, Thorpe Park opens after lockdown as a flurry of punters rush to make the most of the good weather. 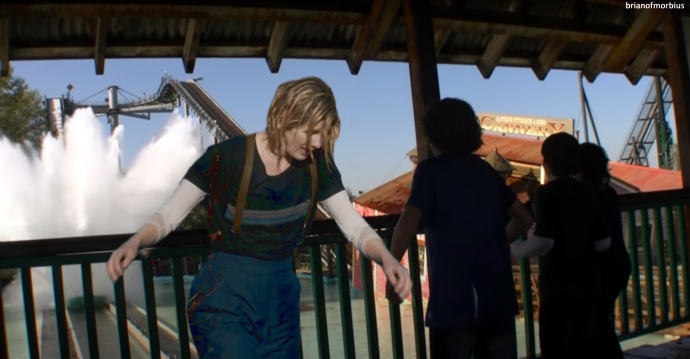 And an abandoned concept still from the new Bill and Ted trailer reveals that studio execs were suggesting a very different look for the phone box.

The Talons of Weng-Jack Chiang: Father Ted Meets Doctor Who

It’s 1995. Channel Four – once subversive and edgy, these days a bloated, shockingly mainstream effigy of its former self – has launched a new sitcom about three Catholic priests living in a shared parochial house on a remote island. One is young and stupid. Another is old and mad (and seemingly in a state of constant intoxication). The titular Ted is middle-aged, secretly ambitious and has the unenviable job of being the straight man to three comic foils (I missed out the housekeeper, but we’ll get to her). Dropping in occasionally are rowing shopkeepers, grumpy bishops, and Graham Norton. It’s a foul-mouthed Last of the Summer Wine, without the scenery.

Fast forward a couple of decades and Father Ted has (at least on this side of the Atlantic) achieved legendary status, but I’m sure you don’t need me to tell you that. T-shirts emblazoned with “DRINK! FECK! ARSE!” are all over Ebay. The phrase “Down with this sort of thing” is a surefire way of poking fun at any online argument. And ‘My Lovely Horse’ is the best Eurovision entry that Ireland never had. It’s lovely that the show has endured for so long and become so popular, but it’s hard to express how rebellious it felt back when it was first aired. I loved how it poked fun at the church without ever quite making up its mind about religion and faith (the show, indeed, contains almost as many examples of apparently genuine divine intervention as any mainstream religious novel). I remember the difficulty of trying to explain the small / far away gag to my friends and family, and was gratified to discover some years later that it’s now one of the best-remembered gags in the show. And most of all, I can still remember the unanticipated thrill of that very first episode, not least the moment when I fell off my sofa at the sight of The Spinning Cat.

The great thing about Father Ted was how it combined surrealism with observational comedy. The rumour that Ireland had deliberately toned down the quality of its Eurovision entries in order to avoid the bankruptcy it faced by having to continually hosting the event is explored to great effect in ‘A Song For Europe’. The third series story ‘The Mainland’ pokes fun at fandom, with Richard Wilson gleefully sending himself up and providing, in a way, an early template for Ricky Gervais’ Extras. And I have an old friend who lived next door to an Irish family who, he insisted, were “just like Mrs Doyle. Seriously. You put your head round the door returning a drill and they’re shoving a teacup in your face.”

Lineham and Matthews had already decided to hang up Ted’s cassock for the last time when Dermot Morgan died of a heart attack the very day after he’d filmed the show’s final episode. Said episode included a dance sequence that required multiple retakes and which, according to Tommy Tiernan, might have exacerbated an existing heart condition, but we’ll probably never know. I remember shots of Frank Kelly – who played Jack – on the news, and reflected that it was the first time I’d seen him out of costume. I was struck by his eloquence and gentleness, a world away from the fiery Jack, but the very best actors excel (and frequently revel) in playing complete opposites of themselves.

Kelly himself died just the other week, at the age of 77, eighteen years to the day after Morgan. My capacity for mourning an actor I never met who lived to a decent old age is, I’m afraid, a little limited, and I won’t line the walls with platitudes about his death being a ‘tragedy’, because it isn’t. Simultaneously, Kelly was a much loved and respected man whose CV, I later learned, ran deeper than I realised, extending to a prominent role in Emmerdale, among other things. And it really was time, I realised, that I got that Father Ted / Doctor Who mashup done.

I’ve dabbled with Mrs Doyle before, of course. If you want to completely destroy a children’s animated series, get one of the main characters swearing. But Jack himself seemed the obvious candidate for some sort of redub. It helps that it’s comparatively virgin territory: the YouTube content for Ted / Who juxtapositions is smaller than you’d think, consisting of a couple of title sequences and some stuff that almost works, along with stuff that doesn’t.

The trickiest part of this, ironically, was deciding on which villain to use. Sutekh was a strong possibility. So, too, was Mestor, the giant slug in ‘The Twin Dilemma’, and about the only thing in it worth watching. Omega was favourite for about ten minutes, until I remembered that I’m actually working on something else for him that I plan to do later in the year. In the end, for various dialogue-related reasons (some of which will become entirely transparent if you’ve watched it) Magnus Greel won out. Remove the dialogue from ‘Weng-Chiang’ and the first thing you notice is what a physical performance it is, with heaps of gesticulation. And he delivers practically every line from behind a mask, which makes dubbing that much easier.

This was fiddly, but a joy to put together. It’s cut almost as tight as I can (get in quick, get out quick seems to be the way I do things these days) which means you can fit more in – I didn’t, as my brother observed, use “every single thing he ever said”, but it was a close run thing. The punch line at the very end will probably confuse you unless you know your Ted, but it just about works. Just about. As for me, I shall, when I get the house straight, sit down with a bottle of whiskey and the box set that adorns our shelves, and raise a glass to the most hot-tempered – but eminently quotable – priest the Church has ever seen.

Anyway. Finish on a song, right?

Our church is working its way through The Story, a thirty-week study course that goes all the way through the Bible, from Genesis to Revelation, with the intention of giving a holistic view. Last week we studied Daniel and his three friends – Shadrach, Meschach and Abednego – who were condemned to death by the despotic Nebuchadnezzer for refusing to bow to his graven image. The king had them chucked into a furnace, seven times hotter than usual and is astonished when they emerge unharmed. “Weren’t there three men that we tied up and threw into the fire?” he asks his aides. “Look! I see four men walking around in the fire, unbound and unharmed, and the fourth looks like a son of the gods.”

Son of the gods may be pushing it, but this sort of intervention seemed obvious.

In other news, Daniel finished his next set of reading books and brought home Ratty the Rat, the class mascot, one of those stuffed-toy-with-diary things where you paste in pictures of Ratty playing on the XBox / swimming / in the park. Or, in our case, re-enacting scenes from ‘The Talons of Weng Chiang’, with arguably improved effects.

That was Emily’s idea. It was mine, on the other hand, to add an extra dimension (in space, relatively speaking) to the Mr Tumble’s Tumble family.

You can mock me if you want, but I think there’s a market for that spotty TARDIS, even if it’s a bit Happiness Patrol. It really is something special. (Sorry. I’ll get me scarf.)

Are we Tom Baker obsessed in this house at the moment? No. That’s silly. 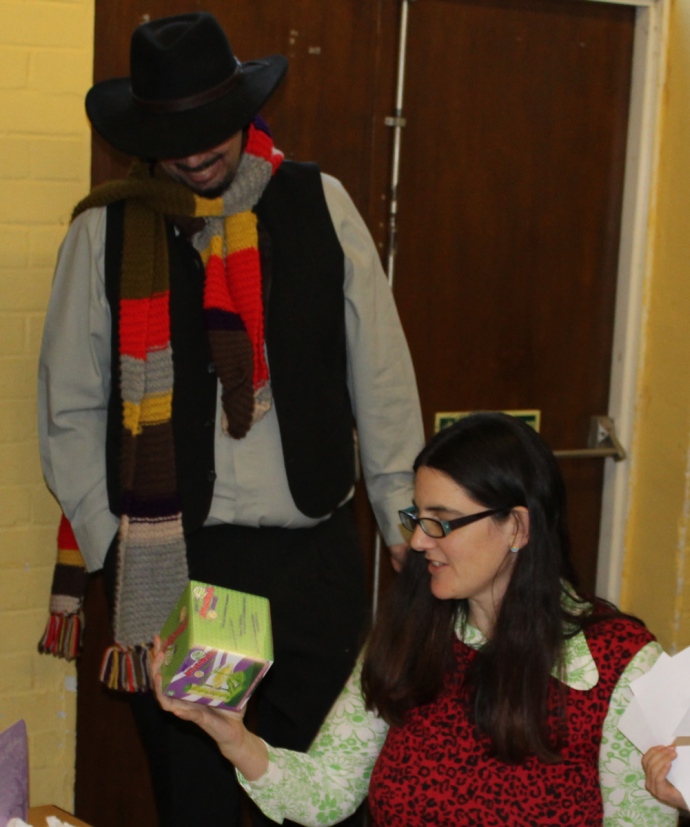