For Emily, the eye-rolling started early. It happened when Graham was giving a history lesson, three companions in Mufti (and a Doctor who seems happy to keep the braces on) gathered in a sparse office in early twentieth century New York. No one seemed to know anything about Nikola Tesla, including the mansplaining bus driver. They had just been walking through the streets asking about Times Square and the Empire State Building, both of which had yet to be built, and as far as my other half was concerned, this fresh display of ignorance was a bridge too far. “Honestly!” she spluttered. “Didn’t this lot learn anything at school? Don’t you need to have at least some GCSEs to become a police officer?”

I’d never studied or even learned about Tesla at school, and I told her so. “Didn’t you measure in Teslas?” she asked.

“Look,” I said, “I can’t remember a thing about Year 11 Physics. Except for that conversation with Mr Brame about whether the backwards universe from Red Dwarf was possible.”

I’ve learned a lot since secondary school, although Tesla is still a knowledge gap – one I recently attempted to fill by playing Tesla Vs Lovecraft, a twin-stick shooter which gives you an array of steampunk gadgetry and puts you on the streets against hordes of denizens conjured from other dimensions by Lovecraft himself, for reasons we’ve never quite managed to discern. It is ridiculous fun but I bought it, I will confess, largely for the Lovecraft connection – a man who has never and likely never will make any sort of appearance in Doctor Who, for reasons that ought to be obvious if you know anything about him, although his influence over the show has been prolific, from the outright pastiche that is ‘Image of the Fendahl’ to the tentacled mouths of the Ood.

All Nintendo Switch sessions aside, having the TARDIS fam wax lyrical in such a fashion of ignorance is, at least, familiar territory. But never mind Graham, Ryan and Yas meeting famous historical people without a clue whom they’re addressing – why on Earth doesn’t the Doctor know? Mistaken identity often enhances a narrative, but it jars when the pudding is overegged: are we really supposed to believe that there isn’t a visual dictionary in the library, or that no one checks the readouts to see when and where they’ve actually landed? It’s happened twice this year, once with Ada Lovelace and once with the pioneering inventor who graced last night’s episode, and on both occasions the audience has been quicker on the uptake than the Doctor – who manages to wander into and escape from the Niagara Falls power station without having a clue that she’s in the presence of the man responsible for building it.

In ‘Nikola Tesla’s Night of Terror’ Nina Metivier re-imagines the eponymous Tesla – played with dignity and aplomb by ER’s Goran Višnjić as an impassioned immigrant (albeit one with a passport) who has pursued the American dream and found it as about as substantial and rewarding as a bag of cheese melt dippers. In his quest for fame and the pursuit of knowledge Tesla has run afoul of a ruthless business rival and a parasitic race of giant alien scorpions – in that order, although presented in reverse. Said business rival is of course Thomas Edison, who, in this week’s Classic revisitation, is played by Robert Glenister, last seen littering the floor in ‘The Caves of Androzani’. Edison is presented here as a ruthless and ambitious slanderer, a man of business above ideals, reaping the benefits of intellectual copyright theft. He’s first seen outside his impressive laboratory, shot from below, as if towering over the landscape like a giant. By the end of the story – and the closing conversation between the two men – the camera has shifted to favour Tesla, who looms subtly over his rival, having attained the moral high ground if not the financial victory he so desperately craved.

Tesla himself is somewhat whitewashed, in much the same way that Churchill was, but it’s to Metivier’s credit that she manages to string together a tale that avoids the preachiness of other recent instalments, even if it manages this by the skin of its teeth. Oh, there are moments. “Business is the American way,” Edison harrumphs for the umpteenth time, before grinning about the time he reduced his rival to ditch-digging. On the other hand he expresses remorse over the loss of his staff (“These were men with families!”), he doesn’t cut and run, he doesn’t try and sell out Tesla to the villain of the week, and at the end he extends a hand of friendship, even if he’s only following the money. It’s simplistic and it doesn’t always work, but to all those I’ve heard complaining about the anti-Trump, anti-American sentiment: are you absolutely sure we were watching the same episode?

Where Tesla and Edison are reasonably developed, considering this is Doctor Who, the villains are sadly lacking: Anjli Mohindra, caked beneath layers of makeup, plays a poor cousin to the already destitute Racnoss and manages to be the least interesting villain since…well, the one they did two episodes ago, if we’re nitpicking. There is nothing to say about the Skithra, except that they crawl over the interior of an uninteresting spacecraft, besiege Tesla’s out-of-town laboratory, and ransack the streets of New York (prompting an amusing chase sequence which will have all the advocates of the Fruit Cart Trope punching the air, or perhaps waving an angry fist and yelling obscenities in an unknown language). That they are dull and forgettable is precisely the point, but it’s a waste of Mohindra’s talent – she really was quite good in that thing with Simon Callow – and when Whittaker sneers that “When you die, there’ll be nothing left behind”, you wish it wasn’t all quite so meta.

Whittaker herself appears to be finally hitting the mark, even if the stories and dialogue don’t always do her justice. She references both Baker (“Nice place you’ve got here, probably”) and Hamlet while facing off against the Skithra, and is equally at home uncoupling a train carriage as she is cobbling together bits of machinery. There is a sense, more than ever, that the TARDIS is a family, with unscreened adventures referenced in every story, and Whittaker leads them with a madcap aloofness that puts you in mind of Tennant, on one of his good (read: less miserable) days. Indeed, ‘Night of Terror’ is easily the sort of story that might have taken place under his reign, perhaps in the company of Martha.

If there’s one thing we might say for the companions this series it’s that there’s something rather blasé about them. Gone is Ryan’s sense of awe at meeting Rosa Parks and Martin Luther King, or Graham’s quiet observations in ‘Demons of the Punjab’. Instead there is an apathetic sheen to each new encounter. Perhaps it hasn’t occurred to them that this is a Big Deal. Perhaps dropping in cries of “Wow!” and “Awesome!” is viewed as gauche or silly in these cynical, enlightened days, the sort of thing best left to Sophie Aldred. Perhaps the writers don’t have time to put them in, or simply assume that someone else has done it. Or perhaps they’ve all got travel fatigue. Come the end they’re all making jokes about average days, as if getting in and out of trouble was as natural as riding a bus or scrolling through a Facebook news feed. “First time here can be a lot,” Ryan notes to Dorothy Skeritt (Haley McGee) as the two of them chill in the TARDIS. “It certainly is a lot,” she retorts. “But you take it in your stride.”

Nonetheless: it was good, and it was solid – which sounds like faint praise, but in a series where Doctor Who seems to be in danger of losing its structural integrity it’s nice to have something that forms a bit of a foundation. ‘Night of Terror’ won’t exactly set the world alight, nor is it destined to make the top ten lists, but if kids didn’t know who he was before they certainly will by the end, even if it’s not exactly a balanced portrait. While not without its flaws, there’s more here that works than doesn’t: the guest cast are mostly very good, old New York is pleasantly rendered, and considering it’s her first time, Metivier seems to have more of an idea of what’s going on than many other writers. She can come again. But next time can we have a minigun and a bit of Cthulhu? 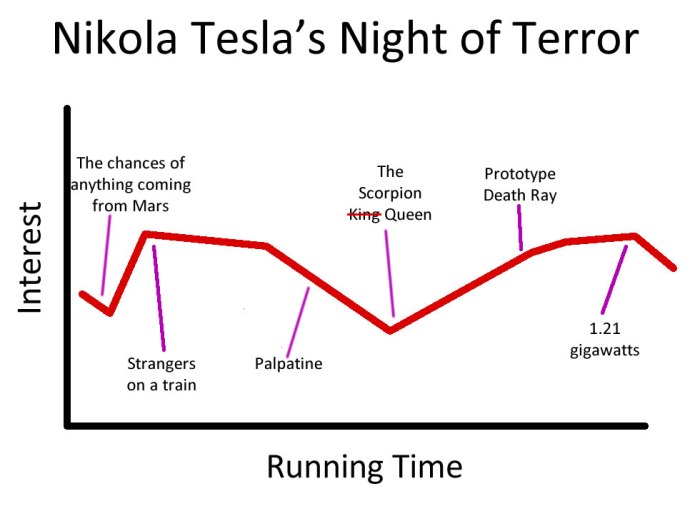