Bromyard is one of those towns my family encounters frequently but never actually experiences properly. It’s situated on the A44, equidistant – or near enough – between Worcester and Leominster (two great examples of English place names that sound nothing like their spelling would suggest they do). It is a place we drive through if we are returning to or from Emily’s parents’ Shropshire abode – assuming we’re going the pretty way (i.e. the route that doesn’t involve tedious, tank-emptying stretches of the M40). The problem with the non-motorway route is that while it saves on fuel it does tend to take longer, particularly on the lengthy A44 stretch, as it is a favourite route of caravans, milk tankers, tractors or slow-moving pensioners, and you can count the number of safe overtaking spots on the fingers of Homer Simpson’s left hand. Normally when I’ve driving through Bromyard I’m either exhilarated that we’re making reasonable time, or drumming my fingers on the wheel, and praying that the slowcoach in front with an upper speed limit of thirty-five miles an hour (including in built-up areas, which really irritates me) is going to turn off soon.

On Easter Monday, however, we stopped here, because there’s a town centre attraction I’ve been wanting to visit for years. You may remember a while back that I posted photos of the Doctor Who exhibition we went to in Cardiff – all bright lights, flashing models and relatively light on actual content. We’d driven through Bromyard and seen signs for the Time Machine museum there a number of times, but had never actually got round to going. Thomas can be a bit highly strung when it comes to stuff like this, and I was blowed if I was going to pay five quid for entry only to have him tear about the place in one of his moments of silliness. So the fact that he was, on this occasion, staying in Shropshire with his grandparents gave us the perfect excuse.

Daniel lasted a minute and a half. It didn’t help that he was tired. It also didn’t help that the moment you walk through the door there’s a whopping great Dalek in the entrance by the TARDIS door, as the Who music loops in the background: effective for conjuring up the spirit of the thing but not so good if you’re a sleepy three-year-old (or near enough) who is discovering lately that certain things frighten him more and more. We had, I think, been lulled into a false sense of security after Cardiff, when – being too young to really understand – he had been taken in by the sights and sounds; if I remember correctly it was Joshua we’d had to reassure and console. But today, Daniel was having none of it. We tried to show him that it was just a bunch of models and that nothing was real, but since Cardiff, he’s actually seen the show, and after five minutes of screaming and head-burying and cries of “I DON’T LIKE IT, IT’S TOO SCARY!” Em and I cut our losses and she took him back to the car, while I walked round with Josh. Then we switched. Daniel dozed on my shoulder while Josh went on his second circuit, gleefully pointing on each occasion at the stuff he recognised and, after coming across an enormous poster of two police officers posing by a Cortina, asking why The Master was in Life on Mars. (I confess I was too busy admiring Sam Tyler’s leather jacket – which I’m still annoyed I didn’t photograph – to give him a proper answer.)

Speaking of photos, these aren’t great, but they do give you a general idea. One of the lovely things about the place is that  it’s stacked full of memorabilia from the show’s golden age – there is plenty of new stuff as well (including a substantial collection of barely-glimpsed alien costumes from the bar scene of ‘The End of Time’, gleefully mounted in every single display case with a sense of glee which frankly borders on overkill) but I was whooping with delight at the sight of Patrick Troughton dolls, old Cybermen and – most thrillingly of all – an actual Zygon. Elsewhere there’s a model Starbug (of Red Dwarf), and plenty of Thunderbirds stuff. It’s not huge, but you can spend a happy hour there looking at everything. I’d have enjoyed it more had we actually had the chance to go round it together, rather than having to work in shifts, but that’s the way it goes. 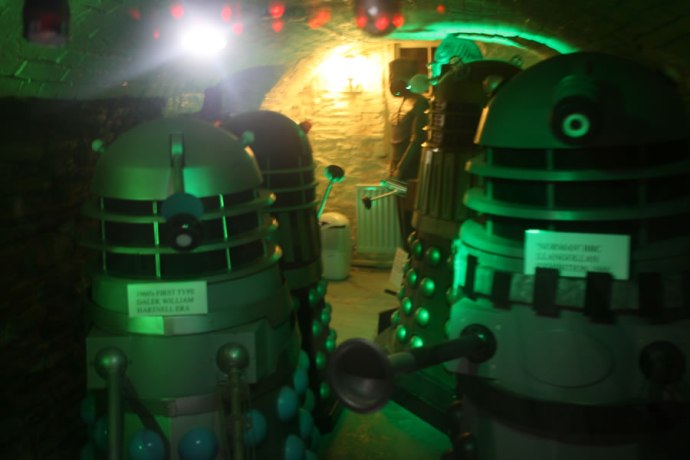 Daleks! The one front left is the 1966 edition. The gold one on the right hand side is 2005. Note the increased size. Maybe we’re all just getting taller. 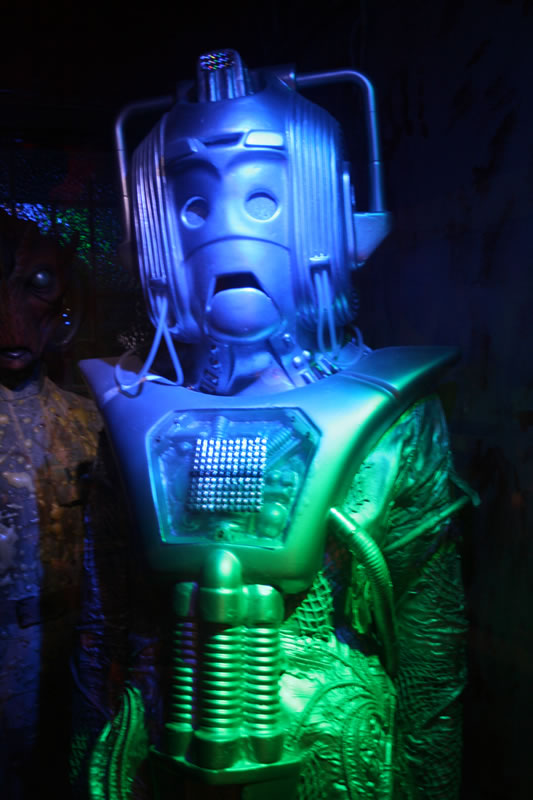 ‘Earthshock’ Cyberman. I cried. If you’ve seen it, you’ll know why. 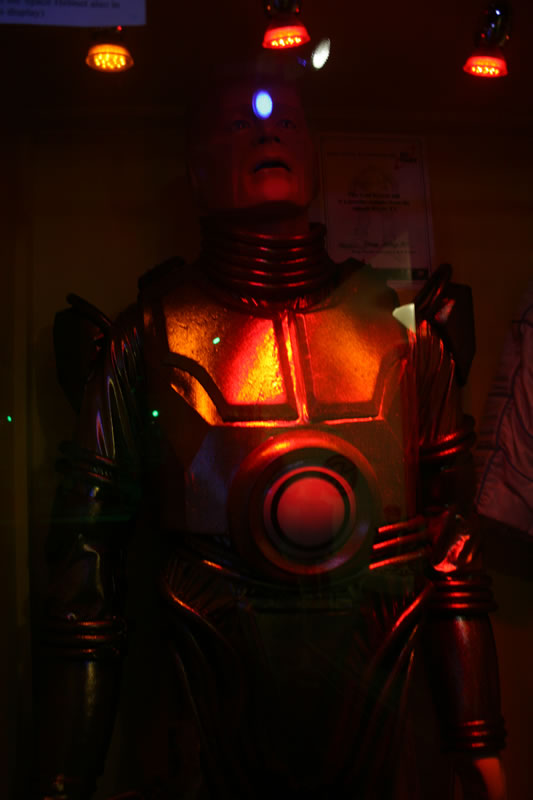 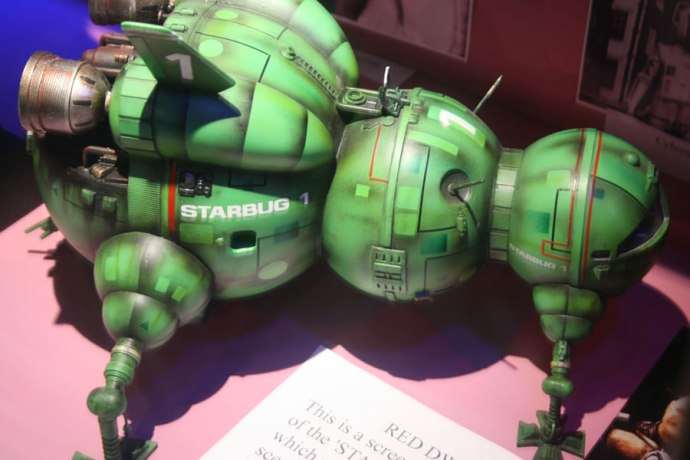 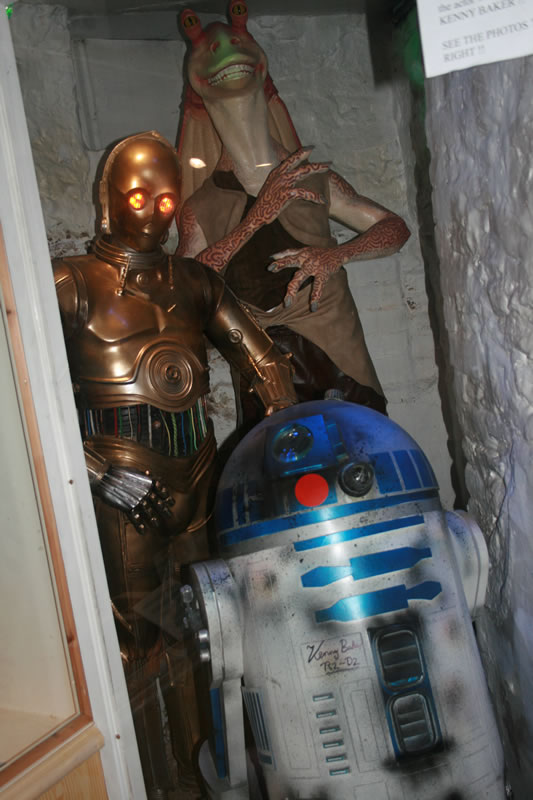 See, there’s always one idiot who has to mug at the back and ruin the picture. 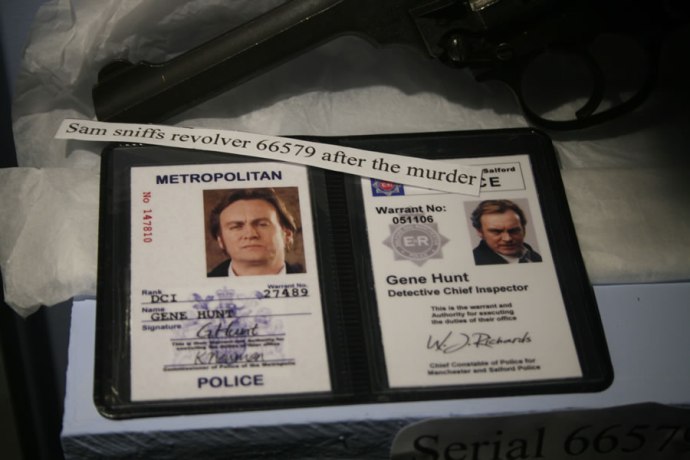 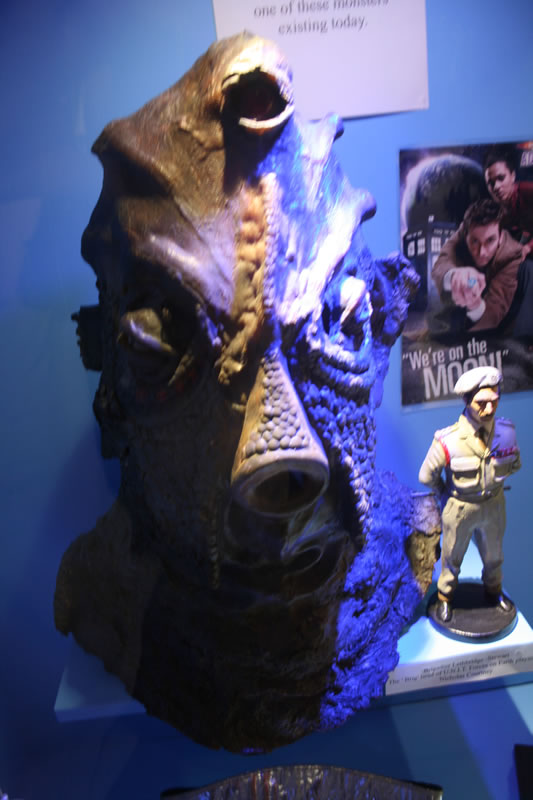 “Seriously, they don’t let me out of here soon I’ll pee battery acid all over the floor of this case.”

Matt Smith’s white tie from ‘The Big Bang’, apparently the only Eleventh Doctor outfit on show in a private collection. 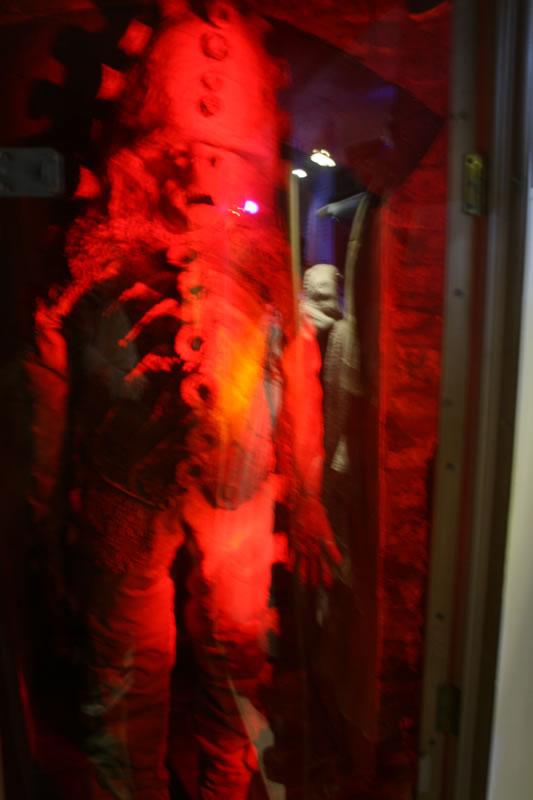 It’s blurry and poorly lit, but IT’S A ZYGON! 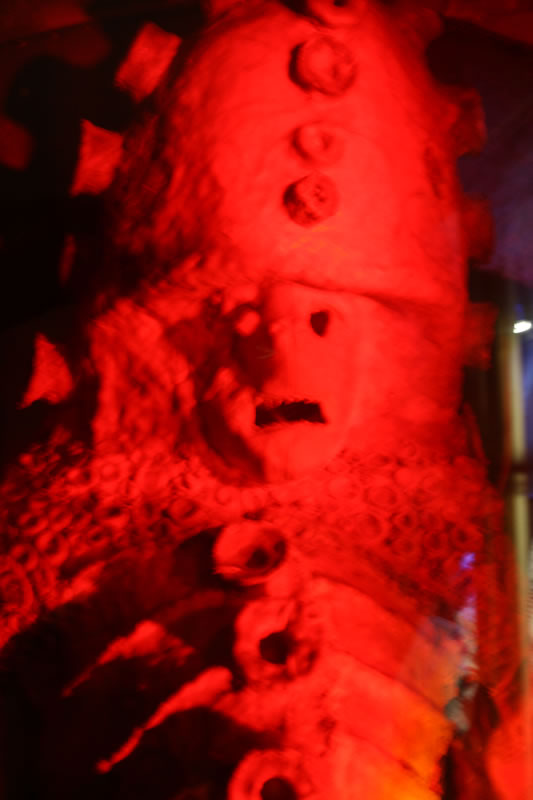 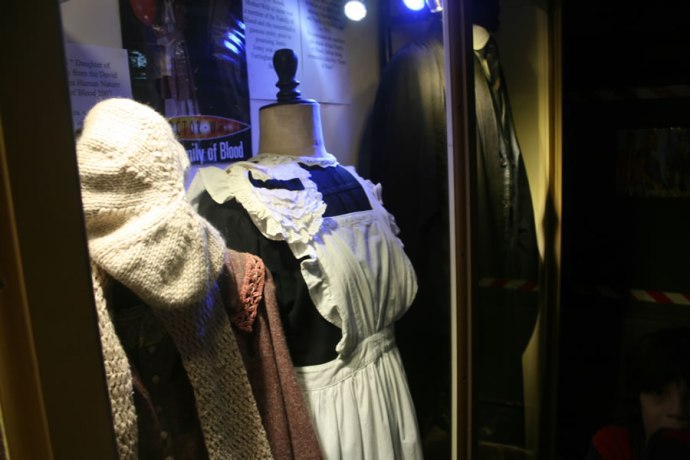 Costumes from ‘The Family of Blood’. Or, as son no.1 put it, “Why does that monster have no arms and no head?”

Do go, if you get the chance. Just leave the three-year-old at home.