This week, we take you to war-torn Skaro. I think I watched ‘The Magician’s Apprentice’ before I got round to seeing ‘Trial Of A Time Lord’ – but when I did, the connections seemed obvious. 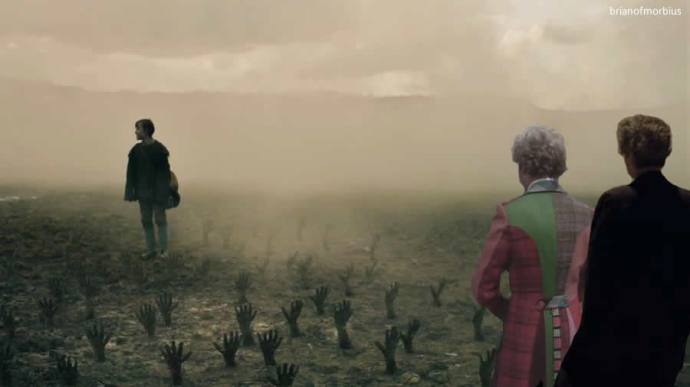 Does anyone know who pioneered the hand-shooting-up thing, anyway? It’s been used to brilliant effect in Carrie (included in this montage I found), Gremlins turns it into a recurring gag, and presumably if League of Extraordinary Gentlemen hadn’t cut away from that grave scene when it did, the shot would have concluded with Connery’s rejuvenated arm punching through. Myself, I always think about that scene from Labyrinth. You remember. “We’re helping hands!” They should remake Labyrinth. That always ends well.

Elsewhere on the same battlefield:

My instincts tell me that Capaldi is saying “Don’t worry Matt, I’m sure we’ll find your keys over there somewhere”, but if you can think of a better caption I’m open to suggestions.

Anyway, it’s funny the sorts of people you meet while you’re out and about, isn’t it?

“BY THE POWER OF GALLIFREY!”

Like Loading...
Categories: Have I Got Whos For You | Tags: david tennant, eleventh doctor, he-man, masters of the universe, matt smith, peter capaldi, tenth doctor, the magician's apprentice, the ultimate foe, trial of a time lord, twelfth doctor | Leave a comment

I have the power

Because sometimes, you just have to share a silly picture.

The sharing of which led to someone else sharing this with me. You reap what you sow…