Posts Tagged With: daleks in manhattan

Have I Got Whos For You (beachcombing edition)

“Right. This is gonna be fun.” 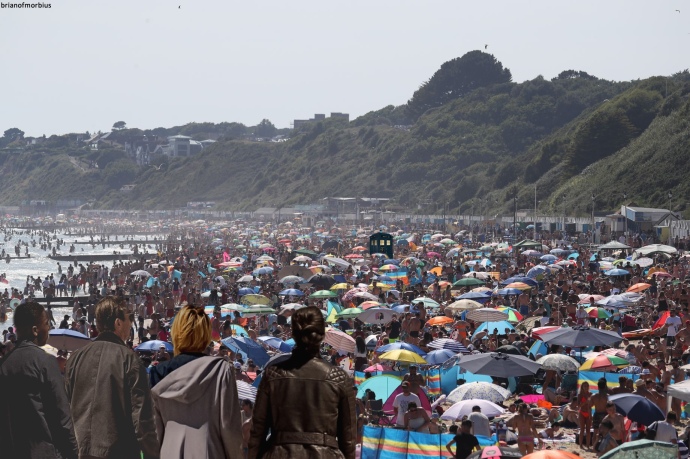 I’m at a loss. The hottest day of the year, and you go to the beach? Not only the beach, but one of the busiest, most popular beaches in the country? What, did you think that no one else was going to have the same idea? Or did you think it was like those voting cartoons where everyone assumes that they’re the only ones who feel this way and so nothing gets done?

I mean, it’s Bournemouth. We don’t go to Bournemouth, even though it’s the nearest place with any sand, at least as far from here. We’ll drive up the road to Southborne. Or Boscombe, which is quite pleasant since they did it up and which has its own police box. (Yes, it’s still there, at least it was last August.) If we’re feeling particularly adventurous we may – emphasis on the may – walk along to Bournemouth city centre (God knows you can’t park there), if it’s the middle of autumn, or a weekday. But in the middle of furlough, in thirty degree heat? Yes, I could have driven my family there, or I could have taken them on a hike through the Danakil Desert instead, which would have been mildly more sensible.

Anyway: it’s Canada Day, so here, for no reason at all, is a picture of Peter Capaldi accompanied by a moose. 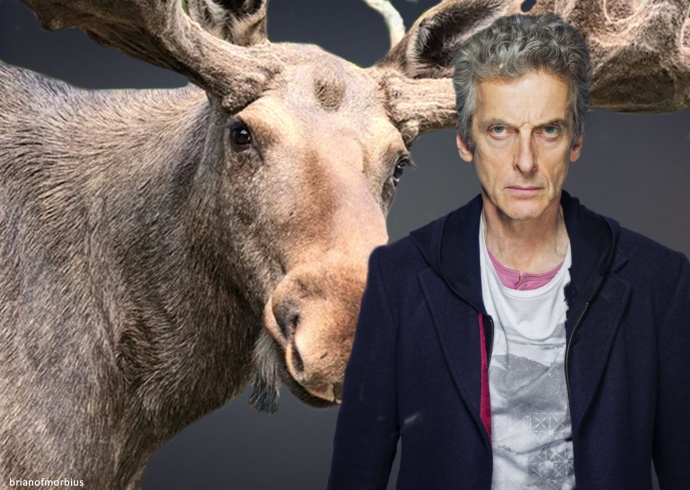 My parents went to Canada years ago. They didn’t see any moose, although there was a bear or two. At the beginning of the year, before all this, Emily and I had a spa day at a local hotel – one of those Groupon things – and while we were swimming casual lengths the two of us considered blowing some of my mother’s inheritance on an all-out trip to New York and Canada in the summer. Then there were bats and jokes about coughing and then it all stopped being funny, so we’re glad we’d already postponed it until next year.

Meanwhile, the Eleventh Doctor’s been in lockdown so long, he’s beside himself. 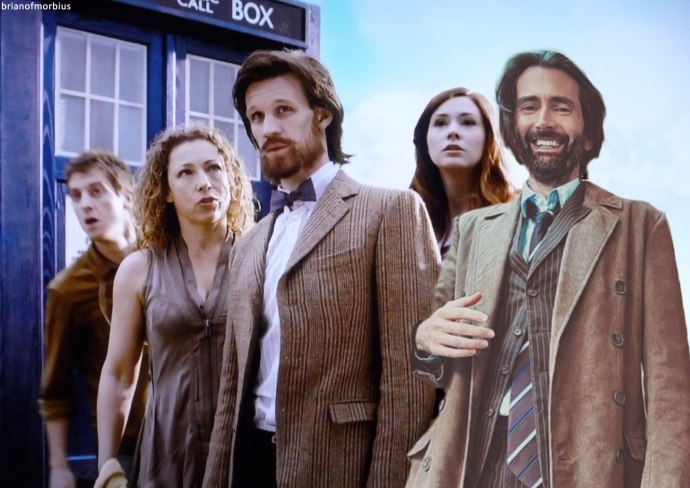 There are many ways to cope. For example, I’ve been going back through Grand Theft Auto 5, doing all the bits I never got round to doing on my first playthrough, a few years back. You can cycle up mount Chilead, learn to fly a plane, get in a few rounds at the golf club – oh, and do yoga. I was perusing Google images on International Yoga Day, just the other week, when I noticed that one of the classes depicted in stock photos seemed to have picked up a stowaway. 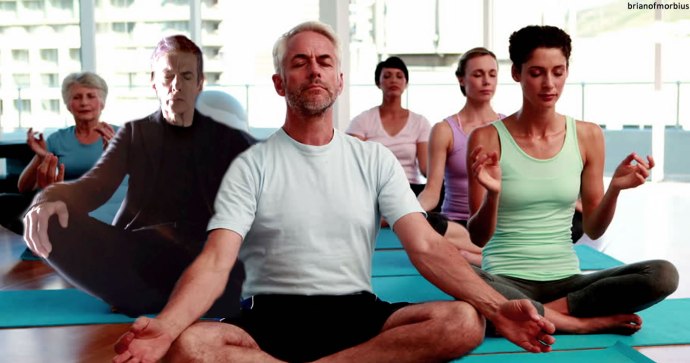 Art news now, and in Spain, hidden cameras reveal the culprit in the botched restoration of Murillo’s The Immaculate Conception. 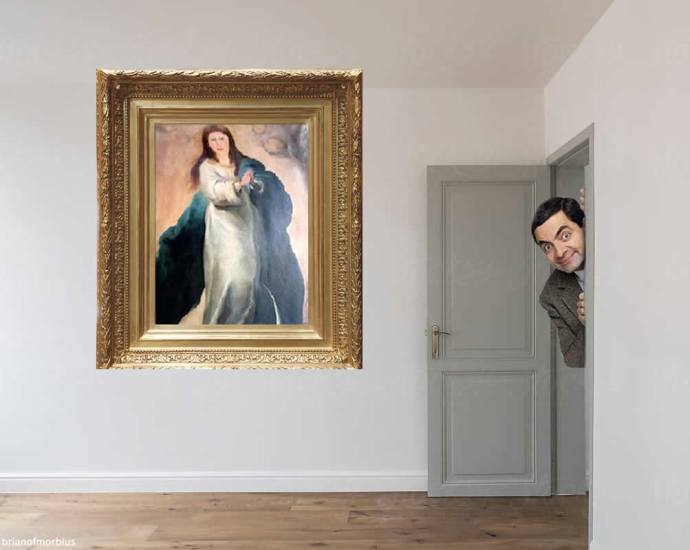 And as the entertainment world mourns the loss of venerated actor Sir Ian Holm, the Doctor introduces Clara to the new version of Handles.

We return briefly to politics, as Matt Hancock, having failed to correctly name Marcus Rashford on Good Morning Britain, drops another clanger outside Downing Street. 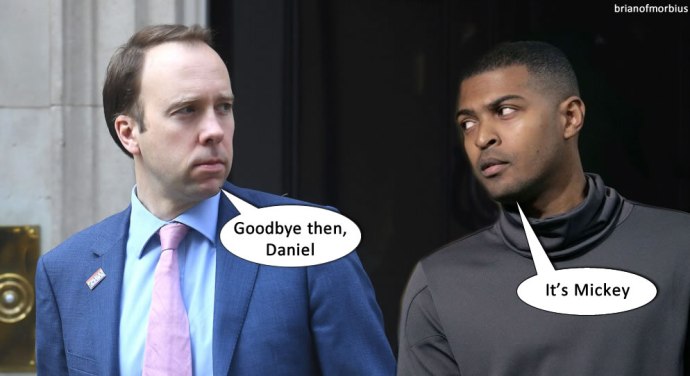 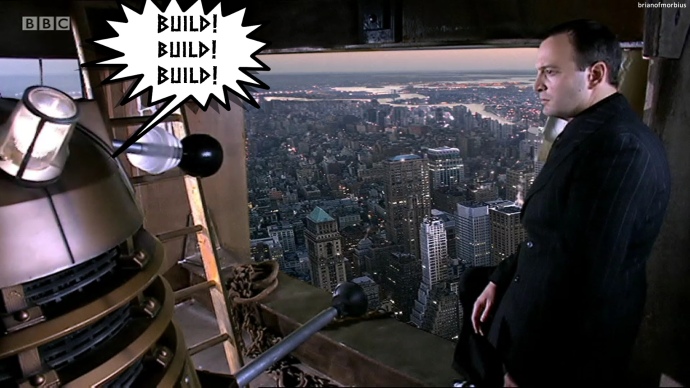 And during a crisis at the local hospital, the Doctor inadvertently places the world in jeopardy when he elects to demonstrate his fitness levels to Amy and Rory. 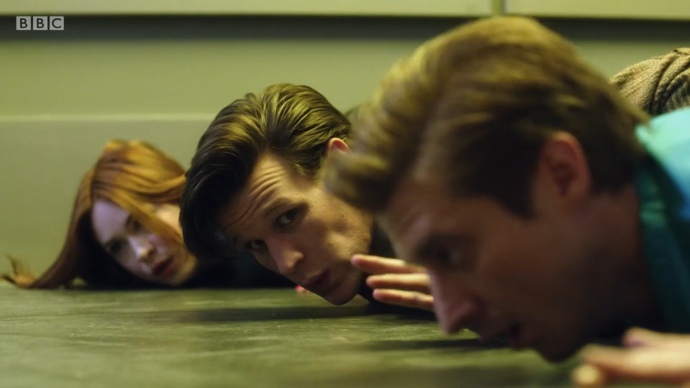