Review: Ascension of the Cybermen

Late 2001, and I’m coming out of a Reading multiplex with a couple of friends. (One is a programmer of some renown; the other will eventually become a highly successful children’s author.) We’ve just finished the first Lord of the Rings, which everyone agreed was very good, even if perhaps the scenery was the best thing about it. We have discussed the Balrog, and the relative brilliance of Legolas (who, it is agreed, is probably the person you’d want at your back in a barroom brawl), and now we’re onto Sean Bean. In what has become something of a career trope, he plays a character who doesn’t make it to the end credits.

Jon – who is not one for reading cast announcements, and in any case the internet is not what it will eventually become – says “The thing about the Council of Elrond was that I kind of assumed it was Boromir, because who else would it be? But they didn’t actually announce him or call him by name until Frodo dropped the ring in the snow. Everyone else gets a mention. Not him.”

I’m telling you this because it’s been two hours since I finished watching ‘Ascension of the Cybermen’ and the reverse has happened. We had five or six supporting characters and I cannot remember a single thing about any of them. Oh, there are bits. One of them was clearly hitting on Graham, which will make next week all the more traumatic when she finds herself at the wrong end of a Cyberman’s blaster. I think one of them mentioned that he was a teacher and that they were sick of running, which is a surefire indication that you should set your alarm forward by fifteen minutes and catch an earlier bus. And one of them had a brother who barely spoke, and who spoke even less when he was killed off, which happened almost immediately.

But that’s it. I couldn’t tell you the name of a single actor, or what they’d been in – not that I necessarily expect this, being generally out of touch with any TV that doesn’t come with hard-coded subtitles (it’s snobbish, but those Nordic dramas are just so pretty); still, at least I could be telling you something interesting about them. God knows there was nothing in the actual episode to give them any sense of lasting appeal. They were sounding boards for the regulars to bounce off: people to keep them company on the long, desperate pilgrimage across space, where your biggest fear is a flying head, or Graham’s infernal optimism; a cockney, cardiganed Wilkins Micawber, breezing from one disaster to another safe in the knowledge that sumfink will always turn up.

Or perhaps that’s the point – perhaps these people are supposed to be anonymous because that’s the point of the story. And perhaps we’ve got so used to Chibnall ramming the point of the story down our throats, or bashing it over the heads of the collective fandom like a TARDIS blue Mallet’s Mallet, that any engagement with subtlety is going to be a misstep. “We’re refugees,” laments one character [consults notes; it’s Steve Toussaint]. “We’ve all lost everything and everyone, and nobody cares.” “We care,” affirms the Doctor, before sending her companions off to an uncertain fate while she tries to bargain with the Lone Cyberman – who’s picked up a couple of pals along the way. Presumably we now have to call him something else? What’s that you say? He’s the Cyberium? Well I’m not calling him that; it’s silly. Cyberium is the sort of unobtanium that’s crying out to be used in a seventies comic, probably featuring the slightly effeminate Cybermen who minced. Something with the Fourth Doctor and K-9. ‘The Shadow of Cyberium’. Yes, I can see it now, in all its multi-panelled, black-and-white glory. Copyright Donna Noble.

At least the social commentary is done and dusted fairly quickly and we can get onto the real meat of the episode, which is mostly about flying heads. Yes, the heads come off and fly now, did we mention that? Hence in an early scene we witness the Doctor, her pals and the aforementioned people I don’t care about running away from a barrage of drone fire and a fresh batch of budget-gobbling CGI explosions, as half a dozen heads pursue them across the burning ruins of what looks curiously like urban Glasgow. It’s like that scene with the model plane in Short Circuit 2, only marginally less exciting. The whole thing is very silly, but it’s not really any sillier than anything in ‘Nightmare in Silver’, and for some reason people seem to really like that one. Chibnall constructs two branching narratives, containing less story combined than Maxine Alderton managed in a single episode last week, and while Ryan and Yas explore gloomy starships and pull off reckless (if effective) manouevres in deep space, the Doctor is snapping at Ryan and –

Matt Carver. You see what I mean.

No, the problem isn’t what’s happening, it’s that I don’t care about it. These people are the last remnants of humanity and it’s all the Doctor’s fault, but we’re not given any real opportunity to reflect on that, or the fact that it’s her that got them into this mess: it’s all conveniently brushed aside so Chibnall can lay a trail of breadcrumb-shaped set pieces, leading to whatever ghastly wooden structure he’s spent the last few months hammering. Ashad revives the Cybermen, seemingly giving them back their emotions (there’s a point to it, I’m sure, and undoubtedly we’ll be told next week) and as the episode closes Graham and Yas are holding the door against an onslaught of newly awakened Cybertroops, while the Doctor is gazing into this week’s McGuffin – a portal that leads to salvation – and discovering that the answers she’s seeking are quite close to home, in an absolutely literal sense. Oh look, it’s Sacha Dhawan. Because when you haven’t got a clue how to shoehorn a cliffhanger, a surprise reveal usually does the trick. Not even the presence of Ian McElhinney, robed, wizened and strolling up and down a windswept beach like a genial Luke Skywalker (acting everyone else off the screen in the process), is enough to alleviate the tedium.

About the most interesting thing that happens this week is interesting only because it’s left unexplained. It’s the tale of Brendan, a foundling left in the road in what appears to be Ireland; raised to adulthood by his adoptive parents; who takes a slow motion fall from a cliff and wakes, Highlander-style, completely unharmed; and who is greeted upon his retirement by two father figures who inexplicably look two or three decades younger than he does. This is all clearly connected somehow – whether it’s some sort of Cyber experiment, an origin story to explain Ashad, a CIA trick or whether the Time Lords are somehow involved has yet to be cleared up, although the only certainty is that the discussion will almost certainly be more interesting than the resolution.  “We have to get rid of everything, I’m afraid,” Brendan is told, seconds before his mind is seemingly wiped. “Thank you for your service. We’re only sorry you won’t remember it.”

I can’t help thinking that as far as ‘Ascension’ is concerned, those words might be oddly prophetic. 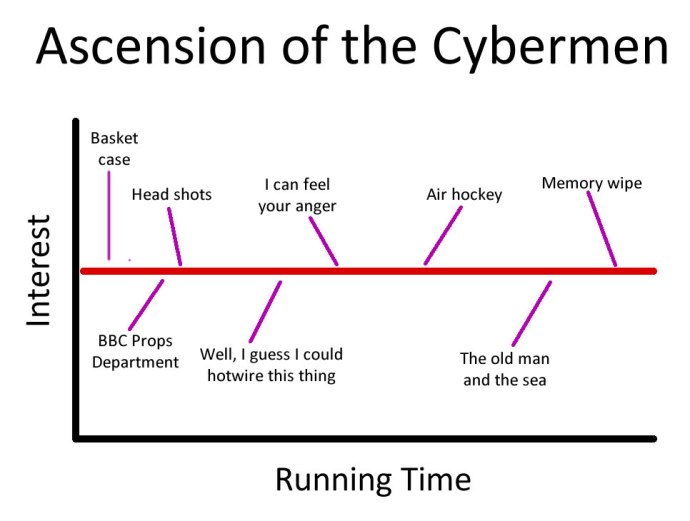 3 thoughts on “Review: Ascension of the Cybermen”