Rejoice, Doctor Who fans! After a year-long break – and then some – we’re back with another round of unearthed conspiracies, wild fan theory and VERY IMPORTAND AND SECRET INFORMATION, as we dissect and discuss the episodes in this year’s series.

For the uninitiated – and there may be a few of you – this aspect of Brian of Morbius all stems from a single episode of Sherlock – or, specifically, the interviews that followed it. Questioned, after the events of ‘The Reichenbach Fall’, as to how Benedict Cumberbatch could possibly have survived his topple from that roof, Steven Moffat replied that there was “a clue that everybody missed”. It prompted a flurry of speculation and enough wild goose chases to fill an Anna Paquin movie. But there was a truth to it, because Moffat did this sort of thing all the time, particularly when he was running Doctor Who, loading his stories with clues and signs as to the fantastical directions they were destined to take.

And so I set about finding them. Seven years later, we’re still going strong – it’s a mantle Chibnall seems to have inherited – and that’s why whenever a series comes out, you’ll find this blog filled with discussion about the SIGNIFICANT AND CLEARLY SIGNPOSTED CLUES AND HINTS as to where the series arc is going. Today we’re looking at part one of ‘Spyfall’, so I advise you not to read any further if it’s a story you have yet to see – but if you have, you may not have realised that it was full of hidden references, some of which took some considerable time and effort to dig up. Join us now, constant reader, as we take a tumble down the rabbit hole. Be warned that this way lies temporary madness, but also blissful enlightenment. And did you bring a tin opener?

We will start, as we almost invariably do, with a control panel. 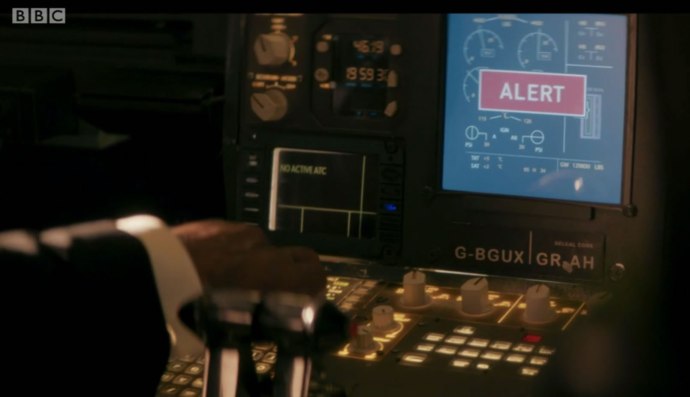 “BE ALERT!” the monitor readout doesn’t quite say. “THE WORLD NEEDS LERTS!” I nearly compiled an annotated version of this, but there’s not an awful lot to do: note, however, a couple of things that may not be immediately obvious, particularly the 1959 in the top centre. 1959 was, of course, the year that the Seventh Doctor and Mel landed in Shangri-La, the Welsh holiday camp hiding a dark secret (no, not Michael Barrymore) – a CLEAR AND TRANSPARENT indication that Sylvester McCoy is set to make a return appearance, presumably alongside Belinda Mayne. There are a number of reasons why I’ve reached this conclusion, but one thing at a time.

Of significantly more interest is ‘G-BGUX’ on the right hand side, below the display. ‘Gux’, according to the Urban Dictionary, is a Swiss German colloquialism both for ‘Hello’ and ‘Goodbye’. GB – referring, of course, to Great Britain – thus exists in a quantum state of both unification and division (did we mention Sylvester McCoy was Scottish and that parts of the show are still filmed in Wales?). Time is in flux, and our actions over the next twelve months could be crucial. And you thought Chris Chibnall was done with Brexit jokes.

The GR-AH reference, of course, should be self-explanatory, so I won’t waste my time unpacking that one. Now, have a look at this. 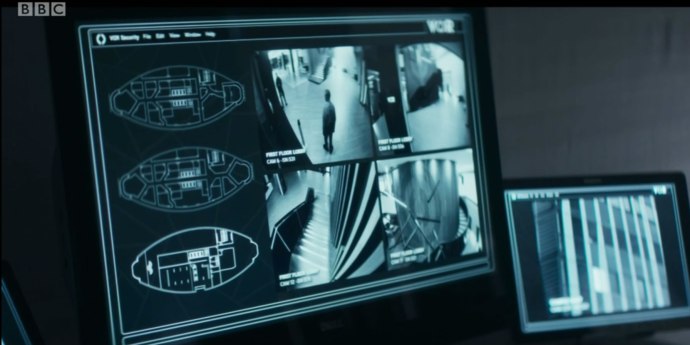 There are two key themes to this week’s collection of signs and portents: the Seventh Doctor (more of him in a bit) and the Master, whose sudden appearance at the end of the series 12 opener shocked and stunned the fandom. At least, it shocked and stunned those of us who didn’t know it was coming – something that was obvious in hindsight, or if you were simply paying attention. For instance, the computer monitor above contains three eye-shaped maps, corresponding DIRECTLY AND UNAMBIGUOUSLY to the first three Doctors – and it is during the reign of the Third Doctor, the highlighted map, that the Master first appears. Moreover the shape of the maps is significant on a number of levels, pertaining as it does to the Eye of Harmony, the portable black hole that powered the TARDIS, first seen in full in ‘The Deadly Assassin’, which featured the Master, and then later in Doctor Who: The Movie, which featured the Seventh Doctor and also…well, you can see where this is going.

But if you watch ‘Spyfall’ properly you’ll find there are clues to the Master’s return hidden right at the beginning, notably in the secret message that the unnamed agent reads in the toilet in the pre-titles teaser. I had to tinker with this to get the clearest image, but it was worth it, because there is a wealth of information embedded in those numbers.

You see? It was right there in plain sight, and you all missed it. Look carefully next time. I can’t do all this on my own.

Next: a map. I love maps. [Affects Yorkshire accent, does slightly leery grin]

So far, so so-so. Alas there is no way of actually ascertaining the precise coordinates to which this map refers: you will be reassured, constant reader, that I spent many fruitless hours perusing the internet, the London and Sheffield street atlases and the Ordnance Survey archive at my local library in order to glean this information, but to no avail. I got through six bottles of Ribena last night trying to figure this out and I really need a wee.

Right, back. No, listen: there’s a good chance that the location is important, and I’m still waiting for my network of Dark Web contacts (who go under the pseudonyms of Lamster, Hedgehog and Glumpy) to dig up the goods. But in the absence of that, I did a little drawing of my own, and look what happens if you connect the occurrences of the word ‘DIE’. 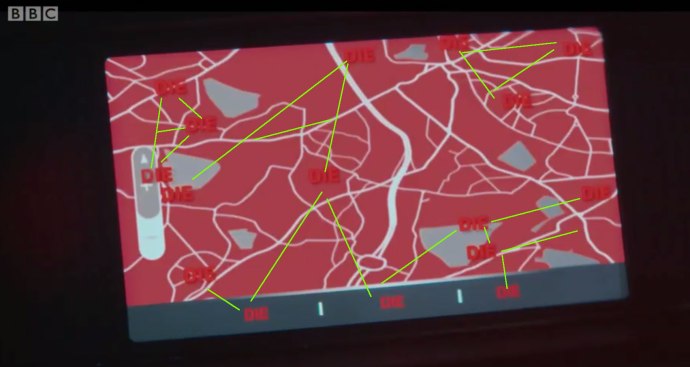 Bad…WF? WF? What does that refer to? Bad Wolf is an obvious answer, if we were to find an O and an L from somewhere (probably down the back of the sofa; that’s the last time I saw the TV remote). But here’s a thing. You may be interested to know that Ian Lavender, star of Dad’s Army (and once seen by this reporter in pantomime in Canterbury, the winter of 1994) celebrates his birthday on 16 February – a Sunday, and the same day that the as-yet untitled episode 8 of series 12 is due to air. And if we insert the initials IL into WF, we get…Wilf.

What could could this mean? Is an ageing Bernard Cribbins set to return to Doctor Who taking the role of a darkened, decaying version of Donna’s grandfather, perhaps someone who’s had his body stolen? Is there some sort of crossover coming involving the heart of the TARDIS and Billie Piper’s teeth? Do we take any significance from the fact that this is episode 8, and that the Eighth Doctor made his debut in 1996 – fifty years to the year, incidentally, after Ian Lavender was born – facing off against Eric Roberts? Do we further take any significance from the fact that the aforementioned Lavender starred in Eastenders alongside the aforementioned Bonnie Langford?  I don’t know, and neither do you. But lest we forget, Wilf made his final appearance at the beginning of 2010 – that’s ten years ago, folks, TEN – in which he urged the Doctor to take up arms and kill the Master. But you’ll have to draw your own conclusions, I’m afraid. I know I have.

We’re almost done but there are two more things to show you. The first is this.

Two things to note: the fact that ’89’ is clearly visible on the readout, referring UNAMBIGUOUSLY AND EXPLICITLY to the year that Doctor Who was cancelled, right after ‘Survival’ (which featured, as we have previously noted, both the Seventh Doctor and the Master), and also the two pale orange lights near the top of the dial. Because here’s how it works: taking these as season numbers, and where the very first blue light at the top of the dial refers to 1963’s season 1, these two amber lights refer respectively to seasons 38 and 39 – in other words, taking into account a continuous numbering from Hartnell through to Whittaker, this year’s series and next. In other words, constant reader, this is a long game, and one that won’t be over until Whittaker’s third and likely final run of episodes, and episode 10 (which may be denoted by the percentage sign, if you examine it at just the right angle) is going to end on a massive cliffhanger.

And it’s worth remembering, of course, precisely where Ryan and Graham’s roulette ball chose to land.

Anyway, the tea’s getting cold. See you next time.