Lost wandering the plains and hills of an undisclosed location, the Thirteenth Doctor and her friends stop to ask for directions.

And over at Westminster, a minor Twitter war erupts during the Queen’s Speech at Westminster when no one can decide on the colour of her dress.

I went to the cinema this week. You can sort of guess what we saw, can’t you?

There’s a bit in Muppet Treasure Island that’s stuck with me. It’s the scene where the pirates are sitting around in a cave or or a hill fort or a jungle clearing or something in the aftermath of their not-quite mutiny against Long John Silver (played with customary brilliance by the now sadly retired Tim Curry). As they’re licking their wounds, one of them holds up a muppet skeleton. “Dead Tom’s dead!” he wails. “Long John shot him!”

It falls to one of the other pirates to point out that Dead Tom’s always been dead, and that this is in fact why they call him Dead Tom. And this, for reasons that ought to be obvious, is the scene that comes to mind every time some fanboy whines that Disney have killed Star Wars. Anyone complaining about supposed virtue signalling and bad plotting in The Last Jedi has clearly forgotten Attack of the Clones, which was crap from start to not quite finish.

Anyway, it turns out we weren’t the only ones there.

1. That kiss came out of nowhere. I know Kylo and Rey had a psychic connection but in what universe was this building up to any sort of love story? (There’s also the fact that they had even less on-screen chemistry than Matt Smith and Alex Kingston, so it really seems a bit strange).

2. The C-3PO thing was one big fan troll. In the film it serves as an inconsequential comic relief side plot: the media speculation had us believing it was much, much more. The same goes for Dark Rey. Or perhaps it’s nothing to do with the way trailers are edited; perhaps it’s the way the press functions now. Sometimes I think there are too many of us, and we’d function better if we had a bit of a cull.

3. It’s kind of distracting watching Carrie Fisher and trying to work out which lines were redubbed, which scenes were recut and which shots were filmed with body doubles (that death scene certainly was).

4. Likewise, there’s something kind of off-putting about a film that spends its final half hour trying to be a straight up remake of Return of the Jedi, only falling rather short. As much fun as it was to see Finn and Mel B ride across the surface of a Star Destroyer before a last-gasp save from Lando Calrissian (Williams was the only actor, as far as I could tell, who appeared to actually be enjoying himself) the whole thing felt a little flat next to Jedi’s perfectly-paced third act. Having the Emperor repeat the exact same lines he spouted thirty-five years ago – give or take a conjunction – isn’t fan service; it’s simply lazy writing. The whole film read like an acknowledgement that The Last Jedi annoyed people, which is fine, except it never annoyed me. There’s nothing wrong with giving people what they want, but it’s a sad state of affairs when a bunch of whining thirty-somethings can hold a series to ransom.

5. Zorii – the masked beauty from the planet that got vapourised – was to all intents and purposes the Red Ranger.

6. There were so many unanswered questions you get the feeling Abrams shot another hour’s worth of footage in an attempt to do an Infinity War and then got his wrists slapped by Disney. Was the Scary Spice clone on a horse Finn’s romantic interest or long lost sister? And what was Finn about to tell Rey?

7. That cameo – you know, the one at the Death Star – was nothing short of marvellous. 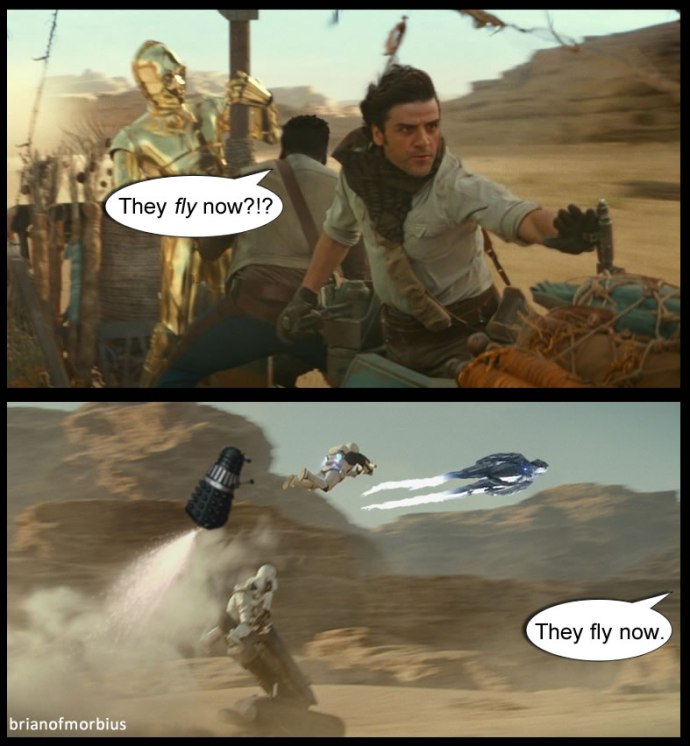 We were finished in time to get back and not clean. Christmas preparations are in a state of some disarray. The house is not really tidy, the chestnuts are unpeeled and I haven’t wrapped Emily’s presents. It’ll get done. Probably.

“Ooh, exciting. I wonder what it is?”

Curiously, the only other thing playing at the cinema is the subject of our other news for this week, as the Daleks devise new and ever more ingenious methods of torturing the Doctor.

Categories: Have I Got Whos For You | Tags: cats, christmas, doctor who, doctor who series 11, nativity, pting, Rosa, star wars, the rise of skywalker, the tsuranga conundrum, thirteenth doctor | 1 Comment