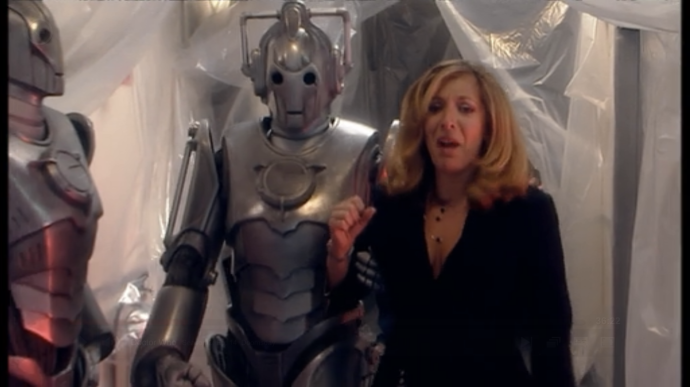 I seem to have a backlog of videos to embed, so what better way to spend a Saturday morning than writing about some of them? Today, we’re looking at political Cybermen, irritating mathematical geniuses and fudged Italian opera, so without further ado, let’s delve into the ridiculous world of tenuous connections and ridiculous mashups that is my head. Bring that slab of Kendal; at least one of us is liable to get hungry.

There is something about Yvonne Hartman’s final words that resonates with me. We’re supposed to be moved as she stands on a staircase moping about queen and country and leaking oil (something I never want to see again, ever). In truth she sounds like a politician falling back on soundbites to get out of a quandary. It is a silly scene in a dreadful episode and thus when it comes to potential redubbing opportunities it is very much top of the list.

If you remember Theresa May’s farewell speech, all the way back in June, you will recall the moment her voice cracked as she spoke of serving the country she loved, before walking back into Downing Street for what we were supposed to believe was the last time (the likely truth is she had to go back in later when she forgot her purse). Meanwhile I was making notes, ripping out highlights and then running her voice through a couple of filters so that she sounded reasonably Cyberish (is that a word? I’m making it a word). The end result is something I confess I quite like. It is one of those transient videos, which stopped being funny as soon as the internet had moved on to the next thing (which took all of a week), but for a moment there, people were laughing.

This is absolutely ridiculous, and I still don’t think it quite works, but it’s the best episode I could find of making the joke I’m not about to give away here. If you’re familiar with the ads, you’ll see what I was trying to do. If you’re not, then it will fly over your head like Concorde. That was a reference to Time Flight, by the way, in case anyone had failed to realise. At least you get to see Adric explode, which is no bad thing.

How did I mark the Pertwee centenary? With this. Pertwee is easily the most musical of the Doctors, at least on screen – forever breaking into song as he’s driving or tinkering, and on more than one occasion a musical interlude proves to be a lifesaver. (Unfortunately it’s exactly the same monster and exactly the same song, two years down the line, which does rather cheapen the effect.)

Speaking of effects, wouldn’t it be far more fun if Pertwee’s voice was contaminated with helium? In recent weeks I’d finally worked out how to adjust vocal tracks so that the pitch is adjusted without the speed being compromised. At some point I’ll be applying it to River’s wedding scene, which will probably make it bearable. In the meantime, I tagged Pip Madeley in the Twitter upload, and he gave it his seal of approval, which is extremely gratifying. Anyone else fancy a bit of John Denver?