Have I Got Whos For You (Boris Bumpus Maximus) 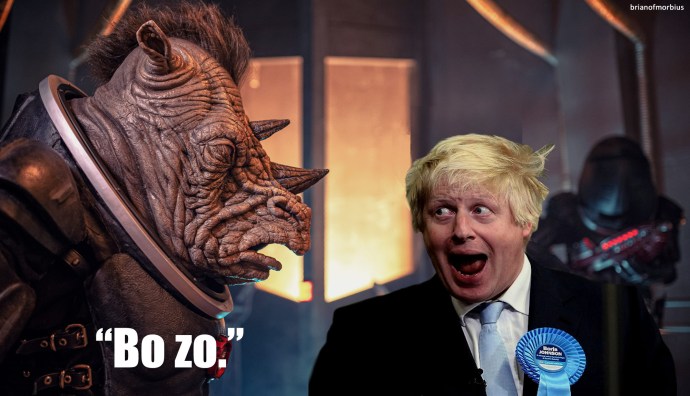 We open in a quarry somewhere in the home counties. Following a disastrous headline-grabbing scandal, the producers of Doctor Who have elected to stage a photoshoot in order to salvage the reputation of the show, featuring current stars Sylvester McCoy and Bonnie Langford. Only the public smell a rat, and of course are having none of it.

Do I think Boris’s private life makes him a poor choice for prime minister? Not necessarily, no. It simply makes him a twat. There is, as Kenneth Clarke pointed out on Radio 4 this week, ample evidence of Johnson’s general cluelessness when it comes to Brexit and pretty much anything of political substance – The Sketch makes that clear, and it should be obvious to all but his most strident followers by now that the clownish exterior is going to wear very thin indeed once we all remember that we’ve just given him the keys to the Big Red Button. Kenny Roger’s Gambler made a career out of reading people’s faces; Boris has made a career out of having other people read his, and generally giggle. He exists in a state of perpetual frivolity, apparently unable to take either himself or anything else seriously; whatever he gets up to in his flat, do we really want a man like this running the country?

Anyway, there was something fishy about that publicity stunt the other day, as this leaked shot from behind the scenes attests.

The second half of this week’s instalment incorporates a bumper crop of birthdays – including mine, come to think of it, although I spent the day tidying and then driving to and from Oxford with the boy. For years I’d thought the piece de la resistance of my birthday-sharing duties was Igor Stravinsky (along with Methodism founder John Wesley, who was renowned for taking the gospels to localities other denominations couldn’t reach). But it eventually transpired that I share a birthday with none other than Jodie Whittaker.

Oh, and Arthur Darvill, who is pictured here with another Arthur. 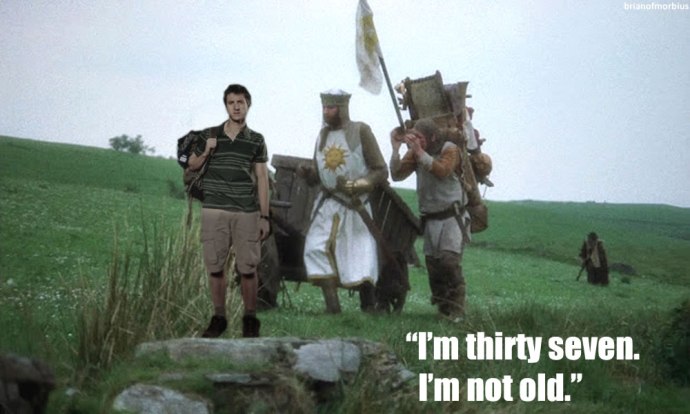 Supposedly it was Paddington’s birthday yesterday – although the duffel-clad bear has two birthdays, rather like the queen..

(Hmm. I’m still not sure I pasted that TARDIS in quite the right place. It looks like it’s floating.)

Also celebrating a birthday this week: Tim Burton’s Batman, the film that arguably saved superhero films (at least for a while), although it opened a floodgate of Interesting Actors Playing Established Characters that, it could be coherently argued, was ultimately damaging to Hollywood’s ability to craft original stories. When was the last time you truly latched on to someone who saw their genesis on the big screen? No, I mean someone who isn’t in Star Wars? And let’s not forget that, for all its brooding brilliance, Batman is guilty of some pretty shocking departures from the source material. Alfred gives away Batman’s secret identity, for pity’s sake. Oh, and at the end of the film an injured, borderline psychotic caped crusader lunges at the Joker in the belfry of Gotham Cathedral, furiously announcing that he’s going to kill him. I mean, it’s good, but…well, had it happened today there would be a hundred and fifty BuzzFeed articles, all of them dreadful, so let’s be grateful it was back in the 80s and the worst you had to contend with was a bit of griping in the fanzines.

Anyway, here’s Batman on downtime in the Batcave.

Episodes used: ‘Revenge of the Cybermen’, ‘State of Decay’, ‘The Mind of Evil’, ‘The Romans’, ‘Caves of Androzani’, ‘Vampires of Venice’, (you will notice a bat theme going on here), ‘Twice Upon A Time’, and a couple I can no longer identify – oh, and ‘The Witchfinders’. Which is mostly there to annoy the Jodie haters. Who will doubtless leave angry emojis, JUST BECAUSE THEY CAN.