Have I Got Whos For You (Winter Warmer Edition)

I mean, I made this one weeks ago, the last time it happened, but it seems fairly topical right now.

You have to feel a little bit sorry for Theresa May. She inherited an absolute dog’s breakfast, a situation that no one was going to be able to resolve because the concept of government in this country (and, indeed, in many democracies) is far more about the acquisition of power than it is about getting things done. No one had a clue how to pull out of the EU, and from what I can see we still don’t. And as Forrest Gump would say, “That’s all I got to say about that.” 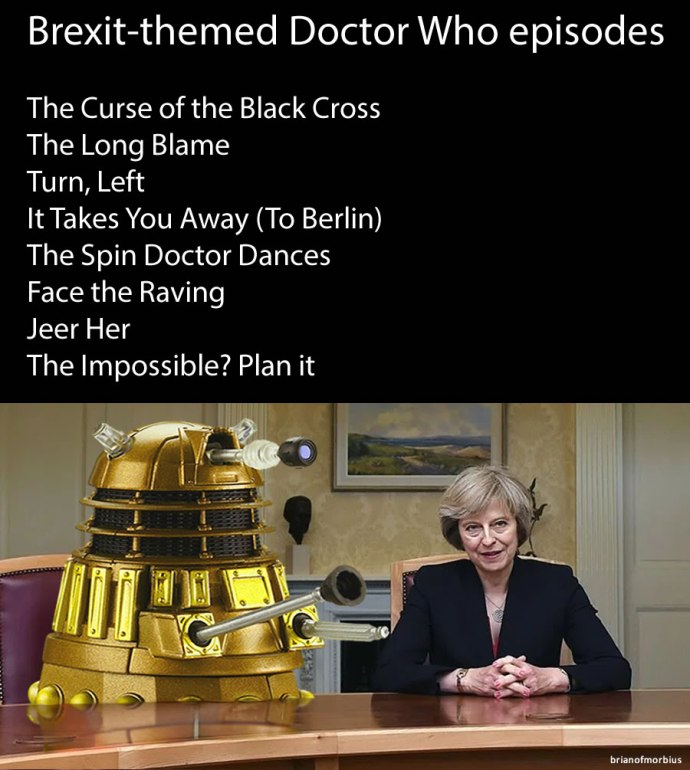 You will have your own suggestions: please leave them in the usual place.

Brexit is having an effect on the economy, of course, with yet another great British retailer headed firmly down the tubes.

Actually I haven’t been in an HMV for years – well, specifically the last time I was in London alone, which would be for the ‘Twice Upon A Time’ press screening back in December 2017. I’d tried unsuccessfully to buy my mother gloves (no suitable gloves – in Oxford Street!) and wandered in; I’d been briefly tempted by a bobble-headed John Hurt, but in the end had left empty-handed. The unfortunate truth is that I don’t really like the place very much. It’s expensive, unless you’re multi-buying, which is what I used to do – come away with five CDs for £30, or two or £15 if it was the newer stuff – and they would sit on my shelves and never get played, another contribution to the great accumulation of stuff. Just before Christmas we had a big clearout of stuff, and the local charity shops were seeing me almost daily. I feel as good about it as I did a year back when I got rid of all my Doctor Who DVDs. (They’re still here digitally, of course, but hard drives are much easier to store.)

I once passed out in the Reading branch of HMV; did I ever tell you that? It was a hot summer’s day over two decades ago, and I was temping at the civil service, earning a little cash to see me through university. I’d while away the lunch breaks wandering the shops and would often find myself casually re-filing all the CDs that punters had left in the wrong places, only to have other customers assume that I worked there – at least that’s what I assumed, seeing as they were asking me to direct them to the Classical section. On this one particular Tuesday I dropped off in a dead faint not far from the video section and awoke as I was being shepherded down the escalator by two paramedics. I spent the afternoon in hospital. The next day I was back, moving Bob Dylan back to the D’s.

Moving on to other matters, there’s been drama over at Sandringham this week. 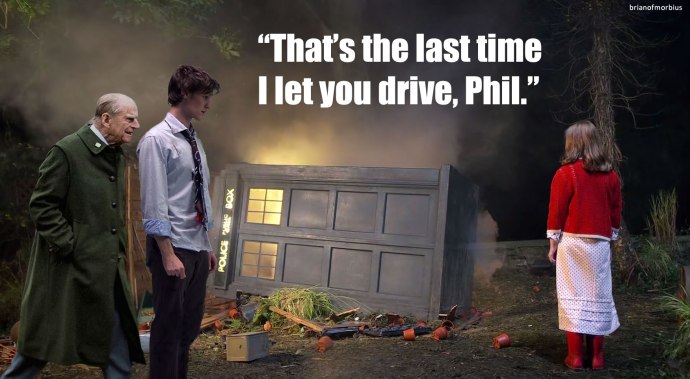 I was in an Oxford leisure centre yesterday when I overheard two elderly gentlemen remarking that “Young people have accidents too” – a sentiment I would not in any way disagree with. The remarkable thing about this was that I had genuinely forgotten that Prince Philip is standing there with his TV doppelganger, although Smith only plays him in the first two series, with Tobias Menzies taking over for series 3. The question of who they’ll get to play him in later series, as the televised queen approaches middle age, is still open to debate. Timothy Dalton, perhaps?

That episode was almost a decade ago. Can you believe it?