Lurking on Facebook somewhere is a woman that I recently blocked. Actually the blocking was mutual, which is in itself a long and not terribly interesting story, although the reasons behind it are worth a mention. She has spent a number of months in vehement protest against the casting of a female Doctor, because it was her concrete belief that the historical treatment of women would make it all but impossible for the writers to churn out adequate stories set in the past. Either no one would take the Doctor seriously, thus rendering her all but useless, or everyone would improbably fall for her irreverence and charm and the story would be historically inaccurate. There were a dozen ways the rest of us managed to explain away this potential stumbling block, both with narrative workarounds and at least a dozen male-dominated stories where this happened (not to mention the show’s frequent historical cock-ups), but they fell largely on deaf ears.

For all the bleating and cat-fighting on the internet, it was clearly preying on the mind of Joy Wilkinson – late of Nicholas Nickleby and now the writer of two episodes of this year’s Doctor Who. The first of these is ‘The Witchfinders’, in which the intrepid Time Lord and her companions land the TARDIS in the wrong place and wind up in a (literal) witch hunt. Taking charge as is her custom, the Doctor swiftly finds herself demoted, outvoted and dismissed by the patriarchy, and ends up accused of witchcraft herself and tied to an anachronistic ducking stool. Meanwhile, the witches aren’t really witches at all. But you knew that before they’d finished rolling the opening titles, didn’t you?

Fun fact: in this week’s episode the word ‘Satan’ is used thirty-nine times. Thirty-nine. I know this because I checked the subtitles. It’s almost as bad as the overuse of ‘fungus’ in the Mario movie. It wouldn’t be a problem had they unpacked things a little bit. Oh, there’s a passing reference to Lucifer. The rest of it is cries of “Burn the witch!” from authoritarian dignitaries and disappointingly quiet villagers; there is a token nod to the Bible but the Doctor casually brushes aside any religious arguments about Satan, merely declaring herself ‘not a fan’, while Graham quotes Pulp Fiction.

There’s a lot of reacting going on in ‘The Witchfinders’. Graham wears a hat; that is about all you can say for him. Ryan’s job is to look uncomfortable, but Cole does this extremely well and thus it seems almost churlish to bring it up. Whittaker, for her part, is snooping around examining the mud like a caffeine-fuelled archeolologist and mostly getting wet, at least during the scenes when she’s not sending Yaz off to do a bit of family liaison – real police work for the second time in two weeks. (Why is it only the guest writers who remember Yaz’s career choices? Did Chibnall forget his own brief, or does he simply not care?)

As seems to be the custom this year, Wilkinson keeps her supporting cast light: three with speaking roles, and one whose job is mainly to advance through a forest holding an axe, leering like someone doing a cut-price Jack Nicholson impression. Siobhan Finneran (Benidorm, Downton Abbey) acquits herself well enough: the revelation that Becka is related to the witch she accuses comes as an interesting twist that sadly goes nowhere very promising. She’s out for blood against Tilly Steele (Victoria), who does a decent line in frightened peasant, before becoming sufficiently empowered to lend a hand in Whittaker’s final rescue operation, marching across the fields with flaming torches like a Frankensteinian mob.

Certainly Cumming (largely thanks to the considerable amount of screen time he is given, not to mention the insights into his lineage) has the effect of transforming the story, rendering a dark fable largely ridiculous and impossible to take remotely seriously even in its most sinister moments. Not that we can blame this entirely on him, considering the monster-of-the-week is an imprisoned race of alien warriors who emerge when a woman cuts down a tree, taking the form of sentient, bodysnatching dirt. At least I think they were alien warriors. While we leave the forests of Lancashire knowing King James all the better, the Morax – surely a verbal play on Lorax, Dr Seuss’s ecological fable – are a by-product, a last-minute substitute for real witchcraft, a focus for the villagers’ hate. There are dark things afoot in Pendle Hill but none of them concern black magic, just a panicky landowner who cannot cover her tracks quite fast enough.

In a way it’s a great shame that the story doesn’t actually feature any real black magic, because Clarke’s third law – to which Wilkinson pays affectionate homage at the episode’s denouement – has been done to death by now. The convenient dismissal of the occult happens in just about every story in which it makes an appearance, with the notable exception of ‘The Satan Pit’, introducing a monster whose existence even the Doctor isn’t able to adequately explain. “Maybe that’s all the Devil is, in the end,” he muses to Ida in that episode’s best scene. “An idea.” It’s a powerful moment, rendered all the more so for the story’s uncertain conclusion. But this is an infrequent occurrence, memorable for precisely that reason, and whether it is ‘The Daemons’ or ‘State of Decay’ anything supernatural in this programme is typically cast into the harsh light of reality the moment the TARDIS crew turn on the lights. With certain rare and deliberately ambiguous exceptions, the Doctor doesn’t do God.

Still, perhaps that isn’t a bad thing. Perhaps the lesson we’re learning from this Brave New World that is Chibnall’s Who is that it is capable of good things when it is worthy and serious, but even greater things when it is not. Would ‘The Witchfinders’ have worked better had it been graced with serious performances, or more elaborate social commentary than the brief monologue that we were given? It seems doubtful. Forty-five minutes is not long enough, and the world does not need another Crucible. In many respects this week was as wobbly and precariously balanced as a house of cards, but I spent most of it laughing. I’m honestly not sure, this morning, just how much of that was intentional. But nonetheless I was laughing. That’s not a bad way to spend a sabbath. 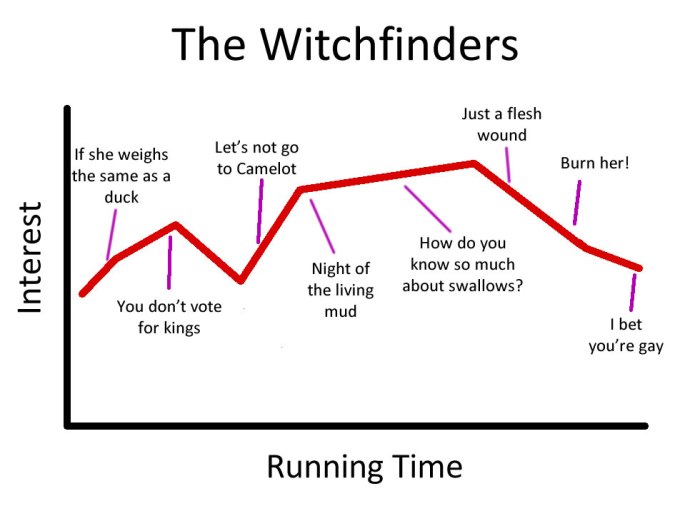