Review: Demons of the Punjab

“While we celebrate our diversity, what surprises me time and time again…is that we are far more united and have far more in common with each other than things that divide us.”

The last time Doctor Who did a Remembrance episode it culminated in fire, levitating Cybermen and a grotesquely reanimated military hero. Capaldi (then still getting into his stride) saluted a stunt double from the opposite side of a cemetery while Jemma Redgrave slumbered, Cybermen all around the world burned, and in Oxfordshire I nearly threw my wine glass at the TV. It was not a good story. More to the point it was insulting. It felt like a line had been crossed. Four years (and a great deal of very turbulent water under the bridge) later the sting has subsided a little bit, but the memories remain: and if there’s one lesson to be learned from ‘Death In Heaven’ it’s that perhaps some things shouldn’t be touched, or at least not touched by Steven Moffat.

‘Demons of the Punjab’ put a new spin on things. Here, we were told, was a war that put Hindu next to Sikh next to Muslim next to Catholic, only for each one of them to return home to division, with the resulting atrocities a notorious (if seldom discussed) dark mark in twentieth century history. It’s too complicated to blame the whole thing on the British, and Vinay Patel – this week’s writer – neatly sidesteps the issue by leaving the colonial overlords offscreen; consequently the only deaths occur as a result of internal unrest that had presumably been brewing for some time. The point, surely, is that people will happily turn on their neighbour given any excuse or opportunity, and not for the first time this series, the monster is us.

Is this patronising? Perhaps. I was going to write something about how this is a lesson the kids need to learn, even if we don’t – but then I logged into a couple of Facebook groups and remembered exactly why I unsubscribed from their feeds. Here’s something: we never did the Partition of India at school. We studied Celts, Romans, both World Wars and spent quite a lot of time in late Georgian / early Victorian England. But we never touched India. We never touched Cromwell, come to that, and years later I glean most of my knowledge of the Civil War from English Heritage properties. The point is this: surely it’s not a bad thing if you tell such a tale, provided you do so with sensitivity? I mean, I learned something last night – never mind the children. 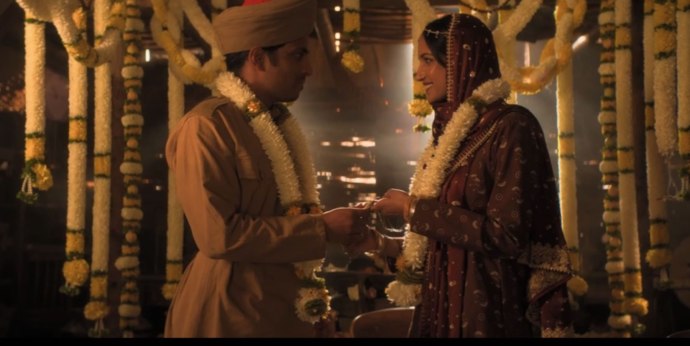 But stepping back into history is nothing if you don’t put some sort of contemporary spin on it, and this week the time-travelling quartet (I cannot and will not bring myself to refer to them as ‘Team TARDIS’) travel back to 1947 to discover the roots of a story that Yaz’s grandmother refuses to tell. The notion of delving into the past to solve untapped mysteries is one that’s naturally going to appeal to just about everyone (while I’m not about to go into details, it’s one I’ve been thinking about a lot this past week) and while it inevitably turns out to be a Pandora’s box, there’s never any question that it was an adventure not worth having. As Yaz notes, “What’s the point in having a mate with a time machine if you can’t go back and see your nan when she was young?”

Still. Doctor Who has become, over the years, an exercise in not dabbling in history. When Hartnell’s incarnation protests, in the sternest of voices, that “You can’t rewrite history – not one line!” it feels like a commandment: as it stands, it’s more like an inevitability. By and large we find that the Doctor’s place in global events is at best incidental and at worst pre-determined – in other words, things happen because they were supposed to happen, not because anyone shifted the narrative. There are notable exceptions – ‘Father’s Day’, for example, which (while being a richly satisfying episode packing a strong emotional punch) is responsible for more misunderstandings about the way Doctor Who generally works than any other episode in the show’s history. Back To The Future posits that your future is whatever you make of it: for the Doctor and their companions, the future is what it is and there’s nothing much you can do to change things.

So before you know it we’re trundling round the Punjab two days before they draw a line in the sand and neighbour makes war upon neighbour. There are resentful siblings and an upcoming wedding to a man that no one recognises – and the woods are littered with alien technology. The twist, of course, is that the titular demons turn out to be nothing of the sort, becoming instead a paradigm for a wiser, older version of humanity, roaming the universe and honouring unobserved deaths as an act of penance. Introducing such a concept so soon after ‘Twice Upon A Time’ is a narrative risk – Big Finish’s monthly range has suffered in the same way – but if anything, the Assassins of Thijar (what do we call them? Thijarians? Anybody know?) are a better fit. Masked, armoured and imposing, appearing from the shadows like a cut-price Predator, they are obvious villains in the same way that the Fisher King was, and the fact that they turn out to be entirely benevolent (if ultimately impassive) is a harsh lesson in judging by appearances.

Needless to say this week is mostly about Yaz, and it’s curious that Patel doesn’t give her a great deal to do. There’s a lot of staring with those wide eyes (no one does the “Did I leave the iron on?” look quite like Mandip Gill) but for the most part she heeds the Doctor’s advice about leaving history unchanged with the sort of steadfast obedience we haven’t seen since the eighties. This is, above all, a story about reacting – the consequences of being in a situation you can’t change, a sort of virtual reality history lesson that is likely not to sit well with some people. “All we can strive to be,” notes Graham, in a lump-inducing moment with Prem that is by far this week’s high point, “is good men”. Graham, indeed, is the one to watch this week – moving from childlike fascination to helpless abandonment with the precision of an actor at the top of his game. Elsewhere, Ryan spends most of his screen time kicking up the dust, while the Doctor officiates at the wedding (in a speech that’s likely to outlive Tumblr itself, never mind do the rounds on it). But even if they’re only chewing up the scenery, at least they do it with a certain panache. The supporting characters, too, acquit themselves well, although Amita Suman rather lets the side down, giving a performance as wooden as the huts that sprinkle the roads.

As with the first Lord of the Rings movie, the real star is the scenery. The Doctor and her companions stride through the fields and lanes of rural Punjab (actually Granada), given a warm, almost sepia-tinted glow by Sam Heasman’s exemplary cinematography. The forest sparkles in the low sun of afternoon, and the camera lingers over the poppies that bloom in the fields. The cavernous interior of the Thijar spacecraft is bland and fundamentally pointless, somehow, and yet again the TARDIS barely gets a look-in (did they only have that set for half an hour, or something?), but both are forgivable offences when everything else looks so pretty.

Doctor Who seems to be transitioning lately. This is not just a tonal shift; there’s an entirely new blueprint on the table in Chris Chibnall’s office. The stories are less complicated, the dynamic has subtly (all right, not so subtly) altered, and the average age for the audience the show is apparently trying to reach seems to have dropped by about fifteen years. The result has been an uptake in new viewers – and a resurgence from older ones who had become disillusioned – but there has been fallout.  Some people, from what I read, are clearly not happy with things. There is a growing concern among various pockets of fandom, old and new alike, that this is somehow “not Doctor Who“, although that archetype is in itself so head-scratchingly abstract it’s hard to know just how to break it down.

Question: has anybody actually asked the kids what they think about all this? Or are we too busy complaining that it’s not the show we know and love? What do we do about the fact that for years Doctor Who was a messy hybrid of itself, endeavouring to be smug and grown-up and sophisticated at precisely the same time as it needed to be accessible and viewer-friendly, and not really managing either? Is there really a point at which we can no longer call this programme by its allocated name, because if the Trigger’s Broom principle applies then surely that ship sailed long ago? Isn’t it better to say that for some of us, Doctor Who is moving on, and that we have outgrown it?

I genuinely don’t know any more. But I do know that last night’s story felt important, somehow – worthy without being dull, tastefully scored and elegantly photographed and (by and large) decently performed. It’s not a Doctor Who I easily recognise but that does not make it wrong. Series 11 is shaping up to be a long and occasionally difficult rebirth: the labour pangs of something that is still not quite ready. And perhaps that’s not a bad thing. Perhaps that’s what it needs to be at the moment in order to survive: perhaps the previous format has run its course and this new path is the only way to avoid stagnant repetition, which inevitably results in devolution. This is an experiment – one that is perhaps doomed to failure, but things were not working as they were, and something had to give. “When it works,” Tim Burton says of his own approach to filmmaking and direction, “it’s fun. When it doesn’t, at least I tried something.”

Russell T Davies closed 2007 with ‘Voyage of the Damned’. It contains a coda in which the obnoxious stockbroker vanishes into the distance while the Doctor glowers at him. The life lesson that follows (delivered by Clive Swift, far less grumpy on screen than he reportedly was on set) is clumsy, but necessary. Last night’s closing scene – in which Yaz met with her aged grandmother in a Sheffield tower block – was clumsy, but necessary. Perhaps there’s a more subtle way of delivering these messages; perhaps it is beyond the abilities of the current writing team to do so. Perhaps this is the series we deserve, rather than the one that we need: perhaps it is the other way round.

Or perhaps it is both. We’re in a world where subtlety has all but vanished from the face of the earth, and everything is delivered in stark black and white because that’s the only language that people speak. We were told – in no uncertain terms – that people are superstitious and fickle, and that monsters appear without warning at the drawing of a line in the sand, but that ultimately we were stronger when we learned to work together. Is this acceptable for a Sunday evening’s light entertainment? Is it right that Doctor Who wields its moral baton with such unerring transparency? That’s another post. But either way, I can’t help thinking that Jo Cox would have approved.