Back in the dim and distant past, in the days when I actually had time to re-read things instead of going through them once and then consigning them to the charity shop pile, there was a well-thumbed volume on our study bookshelf called Action Movies. By an author whose name now escapes me, it took it upon itself to list, assess and score as many adrenaline-pumping gung ho films as it possibly could within a couple of hundred pages, giving them brief, irreverent write-ups. The best got five-gun ratings. The worst received the author’s withering contempt, which I’m sure had the likes of Michael Bay weeping into their satin-lined pillowcases.

Not that I suspect this author would have had it in for Bay; he prized quality of chase sequences over quality of writing and it is for this reason, perhaps, that his assessment of The Last Crusade sticks with me long after the book has found a new home. He’s not interested in the Ford / Connery dynamic, the fact that the narrative comes full circle, the religious themes or the fact that the film literally concludes with everyone riding off into the sunset – he’s more put out that it’s simply not quite as exciting as the first two. Ranking it three (Raiders and Temple both got five, of course) he notes that “This must be what an average Indiana Jones movie must feel like”. I still wonder, sometimes, what he’d have made of Crystal Skull.

We’re five episodes into the new Doctor Who series and it seems that fatigue is beginning to set in. Oh, I’m not talking about the show. I’m talking about the audience. There is a genuine sense of discomfort on social media at the moment, a sea of discontented viewers who are unimpressed when the story is average and formulaic rather than important and worthy – and that’s just the Radio Times, who were uncharacteristically scathing in yesterday’s write-up. Elsewhere, I’m seeing remarks from online acquaintances (and a few people I go out of my way to avoid speaking to) who are in a state of distress about a story that didn’t really do an awful lot, said far less, and yet somehow emerged relatively unscathed.

‘The Tsuranga Conundrum’ begins in an interstellar junkyard, jumps almost immediately to a hospital ship and then promptly stays there, allocating forty-seven minutes of its fifty-minute running time to a set of pristine white corridors and a couple of bedrooms. Nor, too, do the Doctor and companions have any real time to recover from the accident that put them there: no sooner have they regained consciousness than an unexplained object is tearing its way through space, eating through the ship’s hull and then the mechanical systems with the appetite (not to mention diet) of Ted Hughes’ Iron Man and the ferocity of Gnasher from the Beano. Before we know it, the ship is drifting helplessly through space, bereft of its clinical lead and left in the hands of two women with apparent confidence issues, hurtling towards a planet that’s quite anxious to blast it into smithereens because there’s a monster lurking in the vents.

The moment the Pting attacks is unfortunate for the cast but thankfully kicks things up a gear, because in its first fifteen minutes ‘Tsuranga’ is a godawful mess. The leads totter and stumble around the gleaming interior trying to make sense of things, meeting characters with no apparent pizzazz and learning snippets of information about a war that nobody cares about. Meanwhile Whittaker is lurching along the ship’s many corridors (specifically, the same corridor shot six times from different angles) hacking the systems and generally behaving like the know-it-all brats you often see in Holby City in an attempt to get them to reverse thrusters so she can get back to the junkyard. It’s not a bad thing to have a Doctor who – suddenly deprived of her TARDIS and still recovering from a life-threatening injury – is driven, maniacal and not a little selfish, but that doesn’t necessarily make it fun to watch.

Thankfully once we get our first glimpse of the carnivorous Stitch tribute the crisis is in place and things start moving along. The Pting is small but deadly, with an insatiable appetite and no apparent motive for its path of destruction, so the Doctor sets about finding one while a conveniently situated war hero is tasked with flying the ship, even though it will probably kill her (and ultimately does). Eve Cicero – named for the Roman statesman, although that’s where it ends – is played by a suitably dry Suzanne Packer, and is ably assisted by her brother Durkas (Ben Bailey-Smith, whom Daniel recognised from The Four O’Clock Club) and android Ronan (a sadly underused David Shields). Ronan is by far the most interesting character this week, and it’s a shame that we don’t get time to plumb his hidden depths – because if you’re doing a cute version of Alien, surely the robot’s going to turn out to be dodgy?

One potential pitfall behind a larger TARDIS crew in this day and age is the problem of how you keep them all busy, so while the Doctor’s orgasming over perfunctory anti-matter drives (this from a woman who keeps a black hole on her ship’s engine deck) and lying to planetary defence systems, Ryan and Graham are off delivering a baby. Said baby is the unwanted child of Yoss (Jack Shalloo), who is granted far more screen time than his character deserves and is there largely to up the threat level and help flesh out Ryan’s family relations, or lack thereof. That 67th century male pregnancies only last a week and end in involuntary caesarean (I was going to ask how else you’d get it out, but let’s not go there) is quickly cast aside as Yoss lies in the birthing chamber while Ryan is suitably reassuring and Graham conveniently plugs Call The Midwife. The concept of medical professionals who learn something from their patients is a narrative depth that both Holby and Casualty plumb on an almost weekly basis, but this idea of putting Graham and Ryan into difficult situations to get them to bond is swiftly getting old, and is inevitably going to conclude with Graham’s death just as Ryan calls him ‘Grandad’ for the first time. I was going to ask why we couldn’t just skip to that chapter now, but Bradley Walsh is still the best thing in the show right now and it would be nice to make the most of his screen time – but sometimes the road up the Green Mile is oh, so long. 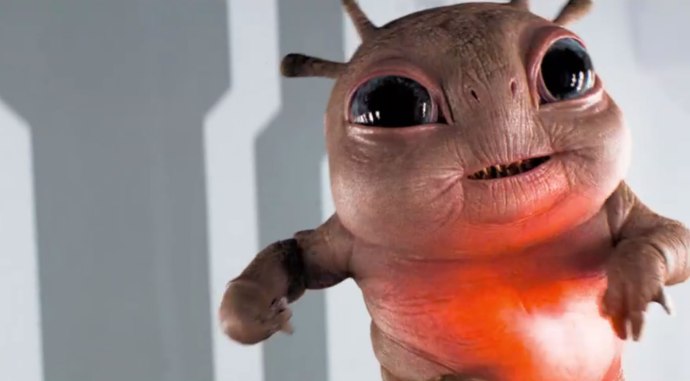 Four years ago, in ‘Mummy on the Orient Express’, we had the Doctor stuck on a spaceship with a monster that was over-exposed. The single biggest problem with ‘Tsuranga’ – besides the narrative favouring of Ed Sheeran over David the Android – is the fact that an expensive and interesting creature is granted not nearly enough time in front of the camera, with its appearances largely confined to the reveal and the moment it’s flushed, Alien-like, from the ship’s airlock with exactly the level of clinical detachment that the Doctor ought to have observed when she was facing off against the mutated spiders last week. I know I tend to applaud whenever the Doctor Who team learn the value of restraint, but it does seem a shame to create something that’s given less screen time than baby Avocado. Still, that’s five for five adversaries the Doctor has singularly failed to kill. Perhaps they’re halfway through a series arc, or perhaps this is Chibnall’s brave new world – but God help us if it is, because these damp squib finales are starting to get a little tedious, even if they do manage to throw in a pop at the hipsters.

All that said, there’s nothing really wrong with any of it. What happens in ‘Tsuranga’ (a word I’ve had to self-correct five times this morning; why can’t they come up with titles I can spell?!?) is nothing earth-shattering or groundbreaking – but failing to set hearts alight is hardly a capital offence, and if we’re in a place where Doctor Who is only worth watching when it says something then we have officially moved into interesting times and I might have to find myself another show for my Sunday evenings. Ultimately this is innocuous, harmless fun, exactly the way Doctor Who should be. It is like the Pting itself: short and reasonably interesting and ultimately discarded until the next time it rolls around. This week was filler material: a pleasant way to pass an hour, nothing more, nothing less. It seems almost churlish to complain about that. 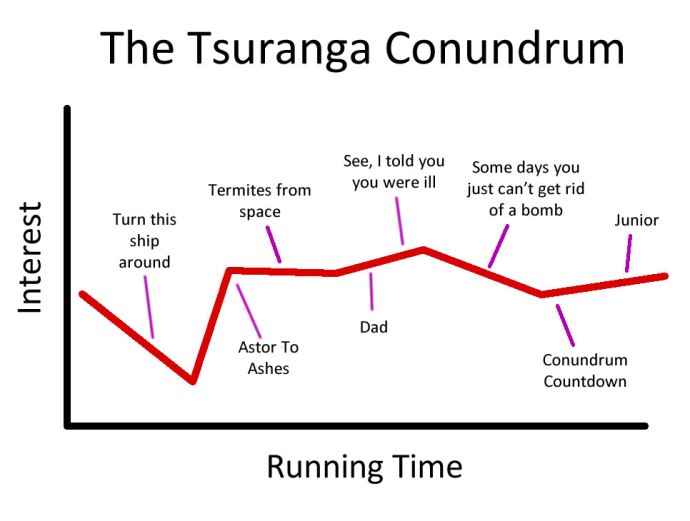