When I first watched ‘The Ghost Monument’, my heart sank a little. For all my heartfelt belief that Chibnall had inherited the mantle of Chief Puzzler and Imp that Steven Moffat cast from his bosom ere he ran forth from the Doctor Who production offices clicking his heels and shouting “I’M FREE!” while dancing a merry jig, it seemed that the second episode was as dry as the desert in which it was filmed, barren and stagnant and utterly bereft of clues. There were no monitor readouts. No intricately decorated chambers. Not even a bus to look at. Just a lot of ruins. I was lost and helpless and out of inspiration. There were tears, I tell you. Actual tears.

But that second viewing was like a light bulb going on. Because when you dig beneath the surface (shortly before lying down on your back and throwing a cigar in the air) there is a whole bunch of VERY IMPORTANT SIGNS AND WONDERS in this story, pertaining to this year’s series arc and beyond. And today we bring you just a few of the very important CLUES AND HINTS that we noticed. Just a few, mind; I’m on holiday tomorrow and I need to pack.

And while I’m doing that, constant reader, perhaps you would be good enough to examine this.

They keep telling us to count the shadows: today I’m telling you to count the spotlights. There are ten in total, of varying sizes, alluding to Doctors One through Nine, including the war Doctor. The angle from which this was shot – in which identical-sized lights suddenly take on unique and distorted sizes – is itself highly important as it enables us to ascribe values to each spot. Because (and this is the crucial point) THESE DO NOT APPEAR IN ORDER. Taking into account the relative number of episodes that each Doctor has appeared in, we may number the spots like this.

Starting with 1 and working our way clockwise, we get the number 12759346885, and Googling this leads us to a French phone number lookup site. It runs off the acronym CACS, and is part of the OVH cloud computing network. But a curious thing happens when we rearrange these letters: we get ‘Cosh Vac’, which is an UNMISTAKABLE WARNING that in a subsequent episode Bradley Walsh will be whacked on the head and then thrown out into the vacuum of space (again), and that the cryptic sight of the Doctor blowing a kiss to her companions is the moment she’s going out to rescue him.

Also note that Whittaker is angling her head into the sweet spot between one and two, which refers to the much-desired and sadly missing final episode of ‘The Tenth Planet’, in which viewers saw William Hartnell regenerate onscreen into a scruffy cosmic hobo. But is it still missing, or is this a clue that they’ve found it? Could it be that Philip Morris’s rummaging through Nairobi skips and Saudi military compounds has finally borne fruit? Are they saving this for a Christmas download? Only time will tell, but I’d start digging out your piggy bank now, if I were you.

Next let’s look at this rather splendid piece of South African architecture.

I mean it is rather grand, isn’t it? Beats a quarry in Suffolk, that’s for sure. Still, don’t let the aesthetics distract you – we’re not finished yet. You see the lines of square holes just above the sand? Examine the top layer. For this it’s necessary to resort to binary, taking the presence of a hole as a 1 and the absence of a hole as a 0.

which converts to decimal as

Or, in other words: 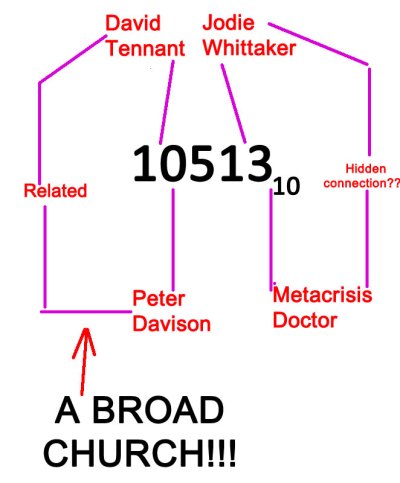 It’s when we examine this week’s guest cast that things get really interesting. First let’s look at Shaun Dooley, who played opposite John Simm and Olivia Coleman in Exile and David Tennant and Olivia Coleman in Broadchurch. And yes, there’s an old joke about the BBC having only a dozen actors and endlessly reusing them – but c’mon, folks. These actors? Can that really be a coincidence? I’m calling it here: The Thirteenth Doctor will meet with an alliance of Prisoner Zero and the Master in 2019, and will find herself aided and abetted by the Tenth Doctor. As if all this weren’t enough to whet your appetite, Dooley was also seen in The Woman In Black, THE COLOUR OF CHOICE FOR JODIE WHITTAKER’S THIRTEENTH DOCTOR REVEAL VIDEO. This is all building to something. Just watch.

Then there’s Art Malik, who appears in hologramatic form, sitting in a tent. But we have to rummage through his CV to get to the meat. First there’s his role in A Passage To India, A COUNTRY THAT WILL BE VISITED LATER IN THE SERIES. Then there’s his role in The Living Daylights, playing opposite Timothy Dalton – yes, him wot played Rassilon. Some years later, after fourteen months of unemployment and some nasty letters from the Inland Revenue, Malik resurfaced in what is probably his most popular role, playing a terrorist opposite Arnold Schwarzenegger in 1994 blockbuster True Lies.

What do we make of this? The title itself is a blatant clue as to the existence of the series arc, given Chibnall’s insistence that he was speaking the truth about a non-existent series arc that now seems to be about to rear its toothy head. And, of course there were [coughs] one or two other things he may have been lying about, all the while feigning his innocence like a naughty schoolboy caught with his hand in the cookie jar. Need we point out the homophonic parallels between Malik and Dalek? We need not.

However: we may also rearrange the letters of Salim Abu Aziz (Malik’s True Lies character) into ‘Lamia is abuzz’, which CLEARLY AND UNAMBIGUOUSLY pertains to the Greek story of Lamia, a Libyan queen who was mutated into a child-murdering monster by her own grief. I will just remind you all that in the last episode we were warned about a timeless child. And I leave it to you, dear reader, to join the dots.

Susan Lynch was in Ready Player One, which features a TARDIS. Um.

Oh, and just before I sign off, has anyone noticed the cushions? The cushions that happen to be THE SAME COLOUR AS JODIE WHITTAKER’S TROUSERS? Who else saw that one coming?