A little over four years ago, we saw the Doctor get pretty close to performing actual surgery. It happened when a group of military types decided to insert him into a Dalek. As written it sounds a little kinky (which was entirely deliberate on my part) – as it stands, there was miniaturisation technology, a cast of entirely forgettable military types and a bit where the Doctor appeared inside an eighties music video, as well as a seemingly abandoned plot strand involving the likely parentage of a soldier named Journey Blue.

If it seems strange that you’ve just been regaled with the plot for ‘Into The Dalek’ it’s largely because I basically had to remind myself. It’s the sort of episode that is so staggeringly average I can barely remember anything about it. My interest level for that week is a single flat line, like a close-up of a heart monitor in a medical drama. It was about as by-the-numbers as they come, with a couple of amusingly callous remarks from the (then) new Doctor the only thing that stands out in my memory. There was absolutely nothing that would make you want to experience it again; neither was there anything that made me want to throw things at the TV. It is the Whovian equivalent of Northampton: an inconsequential place you drive through in order to get to Sherwood Forest.

I’ve devoted two paragraphs to this because it strikes me that in years to come, ‘The Ghost Monument’ will be remembered in much the same way. In the tradition of ‘The Bells of Saint John’, ‘The Lazarus Experiment’ or ‘Delta and the Bannermen’ (insert your own), it is staggeringly average. Last week’s cliffhanger is resolved quite literally at the speed of light – the Doctor and her companions rescued from the vacuum of space faster than you can say ‘Bowl of petunias’, as two ships jump out of hyperspace looking for a planet that’s no longer there. It’s been knocked out of orbit, leading to a crash landing that is arguably the only really memorable set piece in the entire story.

The planet itself is the final waypoint for an intergalactic space race – think Cannonball Run, without the jokes – hosted by none other than Art Malik, appearing like a Grand Vizier in a tent that, at least from the outside, looks rather like the one where Sylvester McCoy once fought clowns and gods. There is none of that here, of course: this is all about getting enough cash to escape from poverty and ethnic cleansing, and you can bet that somewhere in a ramshackle tenement slum on some dystopian colony there is a middle-aged couple watching the whole thing on TV. The race has been narrowed down to two final contestants: Epzo, hostile, treacherous and harbouring Freudian resentment since the day he fell out of a tree, and Angstrom – tortured, pragmatic and conveniently lesbian. Both would kill each other given the chance, but violence results in instant disqualification, so in this week’s morality play the two must learn to put aside their differences if they’re going to get out alive.

Only the Doctor smells a rat. If this was once a thriving planet, she reasons, then where are all the people? It’s not long before we find out, although having Whittaker read the confession from a scientist’s log book somewhat lessens the horror: it’s clear what they’re trying to do, but talking scarves really aren’t much of a threat, and besides the sense of isolation was already done and dusted the moment the killer robots turned up.

You know, there was a time when you could get away with a quick remark about firearms and then that would be the end of it, but ‘The Ghost Monument’ makes it clear that ship has sailed (and docked, and sailed again, and struck an iceberg). It’s not enough for the Doctor to snap “No firearms!” when Ryan suggests gunning down the robots: instead, the aversion to shooting things is contextualised with a ludicrous set piece, where the young fella shouts “CALL OF DUTY!” before displaying an uncanny level of precision while handling a gun he’s never seen before and has no idea how to use. (For the record, I have played several of the Call of Duty games, and whatever Ryan says, the only thing you really learn is that Activision wouldn’t know a decent story if it clonked them over the head with a rifle butt and then locked them in a Gulag.)

Look, I don’t mind the social commentary. And I know this is for kids. But I was watching it with several kids, and at least two of them thought it was ridiculous, particularly when the Doctor then clarifies her remarks by systematically frying all the robots with a conveniently placed EMP, not long before she then blows up several pieces of fabric with this week’s Chekov’s Gun, which happens to be cigar-shaped. The lesson we learn from all this is that mindless violence is fine as long as it doesn’t involve shooting anything, because that’s something the Doctor left behind in the eighties. This in itself isn’t a problem – the concept of absurd double standards has been going on for years, and it’s pointless to complain about it now – it’s just the heavy-handed approach that has the audience rolling its collective eyes. It’s for the kids, but kids are smart, and they know when they’re being patronised. Maybe we could have a monologue to camera next week?

It should come as no great surprise that the titular Monument turns out to be the TARDIS. Chibnall sensibly gets it out of the way at the beginning, and the scene in which the Doctor is eventually reunited with her craft is understated and genuinely touching, although the gag about redecorating – with its obvious punch line – is a misfire. Indeed, some of the best things about this week involve character, from Yaz’s frank conversation with Angstrom about her family to Graham’s tentative sparring with Ryan. Perhaps it’s an age thing, but Graham is swiftly becoming my favourite character this year, with Bradley Walsh throwing himself into the role of reluctant adventurer with dignity and aplomb: Graham hasn’t got a clue what’s going on most of the time but he’s always willing to have a go, and that makes him great fun to watch.

It’s now apparent that Chibnall’s promise that these would be no series arc this year may have been a misdirection, as indicated by both the re-emergence of the Tenza and Whittaker’s apparent shock at being told about ‘the timeless child’, which may or may not have been the Doctor but probably is, in the same manner that Series 9’s Hybrid may or may not have been the Doctor but probably was. It’s too soon to know where we’re going with this but it keeps the press hot and the fan theories bubbling, so everybody wins. There was a brief window when the comparative novelty of an overarching narrative was just about enough for the show to escape with its dignity intact: such an approach had worn out its welcome by the end of Series 5 and by the time the Doctor was stomping across Gallifrey I was just about ready to throw in the towel and get on board that shuttle with Rassilon. Things may improve this year but there’s no point in shoehorning character development and sacrificing narrative for the sake of fulfilling a grand design, and if that’s really what’s about to happen again then the audience may be in for a long and tedious few weeks.

Still, at least they’ve got the TARDIS back. Now can we please talk about something else? 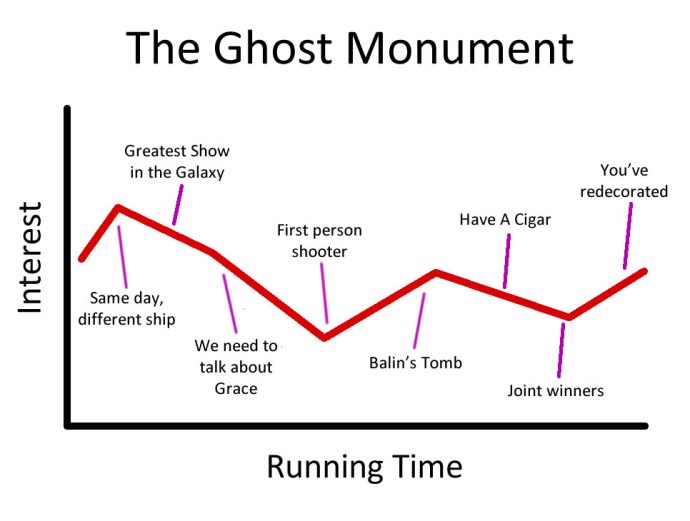 One thought on “Review: The Ghost Monument”