Review: The Woman Who Fell To Earth

“We don’t get aliens in Sheffield!”

In the middle of a bustling northern city, people are disappearing. There are lights where there shouldn’t be lights. A ruined kebab lies in the middle of a deserted street, surrounded by salad which was recently used as an offensive weapon. And a sparky woman who looks to be in her mid thirties is bustling about a train carriage in a suit that really shouldn’t fit her but somehow does, giving orders and occasionally screaming

Maybe it’s because I work in the media these days, but I can’t recall a time a series opener was surrounded by quite so much anticipation. It’s partly the way the entertainment press works, with three hundred word articles carefully shaped around quotes, speculative guesswork and social media reaction, but partly the fact that this feels, just for once, like something different. Doctor Who has always been about change, but this has been the closest thing we’ve had to an outright revolution since 2005, with just about everything changing at once. And while it’s fair to say that the show will always survive – in some form or another – and that the worst case scenario would be cancellation and then the 1990s playing on repeat, there is nonetheless a very real sense that the BBC are taking a big gamble this year, one that could either rejuvenate a tired franchise or kill it stone dead. And the biggest question on the lips of eighty per cent of the fandom this weekend was roughly the same: would the opening episode of series 11 live up to its colossal hype?

The answer, of course, is yes. And also no.

‘The Woman Who Fell To Earth’ is a Schrodinger’s Doctor Who. It is both brilliant and dreadful, depending on whom you ask. Most of the people who were determined not to enjoy it will have hated it, or at least the parts they managed to watch before switching off the TV in disgust and voicing their discontent on the official Facebook page. Meanwhile, those who have treated the Thirteenth Doctor with the same sort of reverence religious fanatics typically reserve for the second coming (which, in a way, is exactly what’s going on) are shouting “TOLD YOU SO! TOLD YOU SO!” from the rooftops, which is coincidentally exactly what all the haters are shouting as well. As such, the truth (subjectively speaking) is a murky middle ground where this was at once a revelation and a distortion, a triumph and a disappointment, all things either good or ungood.

Before we move on, let’s get the elephant out of the TARDIS and back into his paddock. Whittaker is fine. If it takes her a while to warm up that’s typical post-regeneration, and by the time she announces both to a sneering extraterrestrial and the world in general that she’s the Doctor (from the top of a windswept crane, no less), we’re ready to believe her. There are few surprises. She plays the role in exactly the manner you might expect her to, based on the available trailer footage and the recently unveiled preview clip that no one watched when it was leaked, honest. There is an intense, Tennant-like quality to her manic gesticulations and babbling monologues: enthused and distracted and simultaneously comfortable around people in a way that Smith’s and Baker’s Doctors never were. Whittaker herself has deliberately not done her research (her performance is arguably the better for it), and any connections we make are simply going to fulfil the Eighth Doctor’s observation about seeing patterns that aren’t there – nonetheless it is Tennant’s Doctor that Whittaker seems to be channelling, and while she will undoubtedly make the role her own sooner or later it is the Tenth Doctor that currently provides our best frame of reference. It is deeply symbolic, in a way, that the first time we encounter her she has just fallen through a roof.

If the last series opener was a character piece, and ‘The Eleventh Hour’ was a stylistic overhaul dressed up in a rural, almost Pertwee-esque caper (‘The Daemons’ on steroids), this tries to deliver a gripping narrative as well as establishing a raft of new travellers, and doesn’t quite succeed. The plot – such as it is – concerns an alien warrior who has come to Earth in order to ascend the career ladder by picking off a randomly designated human; it’s a microcosmic Predator, in Sheffield. Said alien is dressed in one of Iron Man’s cast-offs and has the distinct advantage of being able to kill anyone he touches thanks to an extremely low body temperature. He has a hundred facial piercings, all made with human teeth, and has an unorthodox mode of transport, given that the first time we see him he’s emerging from a giant Hershey’s Kiss that’s sitting in the middle of a warehouse.

If I’m not exactly selling this to you it’s because the monster of the week, or at least this week, is perhaps the least engaging aspect of the story, and perhaps that’s not a bad thing. It’s certainly not atypical when you view it in the context of the show: Prisoner Zero wasn’t much to look at either, at least until he turned into Olivia Coleman, and the Sycorax were mind-numbingly dull. So it is here: Tzim-Sha (or Tim Shaw, to quote the Doctor’s phonetic teasing) is the same old run-of-the-mill warrior type we’ve seen a hundred times before, a one-dimensional nonentity with few redeeming features and a face that quite literally sets your teeth on edge. A slight Machiavellian streak is about the only thing he’s got working in his favour, and it would have been interesting to find out exactly why this dark suited Goliath feels the urge to cheat in a competition where his physiology already gives him a strong tactical advantage. As it stands, Tzim-Sha’s underhand tactics merely provide a convenient wall for the Doctor to use when she’s bouncing off a few quips about morality. 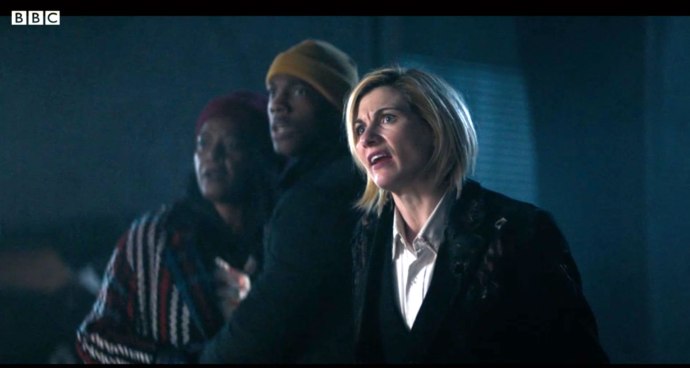 Still. The absence of a memorable, or even interesting villain gives us room to concentrate on the characters, and it’s here that the new series shows its greatest promise. As much as I’ve come to defend the outgoing showrunner over the past year – having realised that ninety per cent of the hatred directed towards him, including my own, was simple jealousy – one thing that is still irritating about Moffat’s work is his tendency to use characters as production lines for jokes. This didn’t simply extend to special guests (sit down, Sally Sparrow, and have a Scooby Snack) but also series regulars. Clara was fun, sparky and usually fun to watch, but she also had a brain like a library, and this was before she started work as an English teacher. The same is true of Amy and to a lesser extent Bill, and while the doe-eyed hand-wringing got a bit much during the Davies years, it’s a blessed relief to find a rendering of Doctor Who that isn’t full of characters who sound like they ought to be in something by Tom Stoppard.

One thing that strikes you about ‘The Woman Who Fell To Earth’ is that up to a point it’s grounded in authenticity. Chibnall has spoken about the idea of family and in the opening story this idea manifests in a literal, semi-blended sense, with Bradley Walsh and Holby stalwart Sharon D. Clarke providing surrogate parenting roles for the bumbling-but-promising Ryan. Ryan is curious, sincere and can’t ride a bike, but inexplicably masters the controls of a building site crane in three minutes flat. Joining him is probationary police constable Yasmine, who is first seen resolving a parking dispute and who seems to spend half the episode behind the wheel of a car, which is what happens when you don’t have a working TARDIS. Walsh is great fun, as we knew he would be – Brian Williams in Grouch Mode, although there’s room for development. It’s a shame, really, that Clarke’s role is little more than a plot point: the adventurous, gung ho instinct that Graham will presumably inherit once he’s trailed round a few quarries, assimilated from a woman whose cards are marked from the moment she steps onscreen. It’s like ‘Face The Raven’ all over again, although at least this time there’s a story.

The episode may be full of real people doing real things but there is a tedious amount of fourth wall breaking. We were promised that gender wouldn’t be a factor, and to a great extent it isn’t – but we do get a couple of worthy-but-dull monologues from the Doctor about moving on. “Right now,” she laments,  “I’m a stranger to myself. There’s echoes of who I was, and a sort of call towards who I am. And I have to hold my nerve and trust all these new instincts.” The nods to fandom couldn’t have been more obvious if she’d been sitting in an interviewer’s armchair reading out Tweets. Not long after, having assembled her new sonic screwdriver in thirty seconds flat – courtesy of a hammer-and-tongs montage that couldn’t be more A-Team if you stuck Mike Post underneath it – Whittaker announces that she’s basically made a Swiss Army knife, only without the knife, because “Only idiots carry knives”.

Is this sort of thing any worse than Tennant’s aversion to guns, or the moralising we got during the Pertwee era? Perhaps it isn’t, and if anything the problem we have these days is that it’s far more likely to generate a headline or a meme, rather than being one of those lines you could simply roll your eyes at and conveniently forget. It’s appropriate that in a world suddenly and drastically aware of just how much waste it’s generating, a show like Doctor Who is no longer is allowed to be disposable trash: the days of file-and-forget are long gone. So perhaps it’s a little unfair to single out Chibnall for doing things that have been a part of the Who rhetoric since 1964: perhaps it’s the culture, more than anything, that deserves a second look. 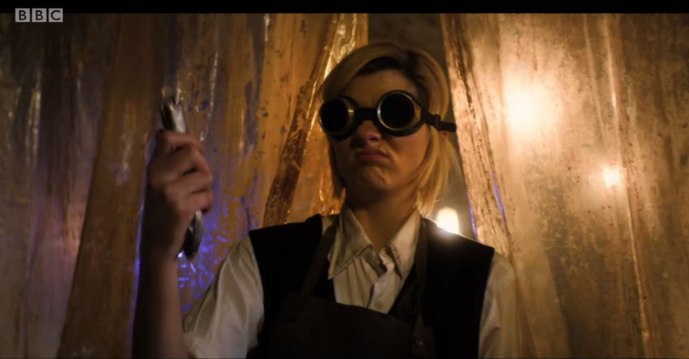 Still, that can wait. There is much to like in here, even if it’s somehow less the sum of its parts. The new filters lend the show a grand, film-like quality that quite becomes it: Sheffield has seldom looked quite so impressive, even if we mostly see it at night. Likewise, incumbent composer Segun Akinola has learned the lesson Murray Gold never did – namely that less is more. Ambience soaks through the episode without ever overstating its point, and I can’t be the only one grateful that the stirring, overwritten melodic themes and piano-and-string driven moments of overwrought pathos are finally done and dusted, with Grace’s funeral and Ryan’s emotional YouTube monologue delivered in calm, dignified silence.

We end on a cliffhanger, although there are no cliffs in sight: merely the cold vacuum of space, with the Doctor and her new companions adrift, sans TARDIS and seemingly without hope. It’s rather like being in limbo, which is perhaps where Doctor Who has been for some time – and where it remains, even with this new approach. But that’s fine. We can wait. A slow burner is better than a disastrous beginning – that’s what we had with Capaldi, whose first episode is wobbly and uneven and only occasionally marvellous. Far better to warm up slowly than be graced with a work of brilliance that ultimately takes us nowhere. We’ve got ten weeks. Let’s enjoy the ride. 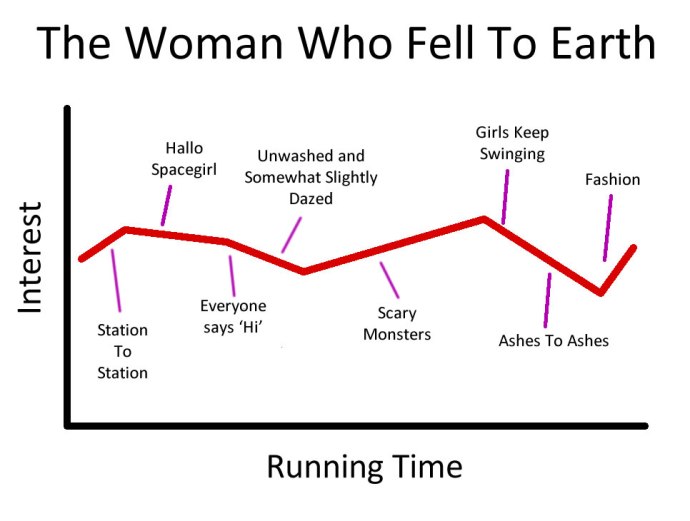 If you have time, check out this week’s video review.

One thought on “Review: The Woman Who Fell To Earth”