Adventures with the wife in space

A couple of years back we stopped off in a motorway services en route to a holiday at Butlins. I ordered coffee from Starbucks and, when the barista asked my name, requested ‘The Doctor’ and ‘Sarah Jane’.

To be honest, the absolute best thing to do in Starbucks is give your name as ‘Spartacus’, but I’ve never quite managed to be that brave. A knowing reference to the 70s, missed by the incredulous millennial who was serving me, would have to do. You take what you can get, although if it’s in Starbucks you rarely have change from a tenner. When I got outside Emily looked at the black scribble across the side of her cardboard container and raised an eyebrow.

“It was going to be ‘Romana’,” I admitted. “But I didn’t trust them to spell it properly.”

It’s a recurring theme. Emily is the voice of reason in my often hapless relationship with Doctor Who. What she lacks in experience she more than makes up for in common sense and general knowledge, and on top of this she’s usually right. I have a friend who has had to make a deal with his other half to keep their marriage intact: when they’re watching science fiction she is allowed four cynical remarks per episode “You know what it’s like,” he said to me.

“In our house, it’s the opposite,” I said. “I actively rely on Emily to beat on an episode that I was enjoying. It keeps me grounded. Besides, some of my best gags come from her.”

When I mentioned her in Facebook conversation the other week the question we received was “Which one’s the Doctor and which one’s the companion?”

“I’m the Doctor,” I said. “But she’s Romana. That should tell you all you need to know.”

It should tell you all you need to know, as well. 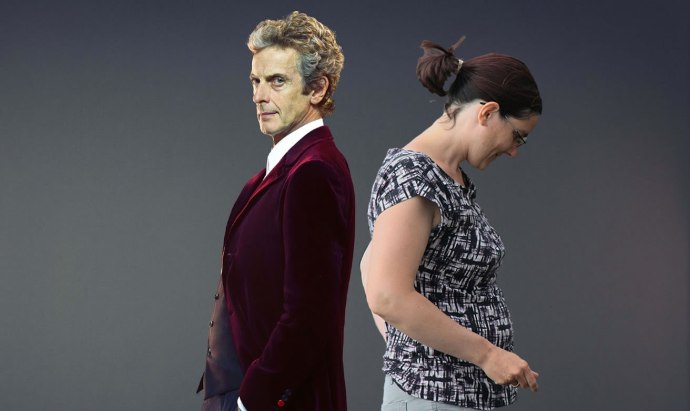