The Next Step does Thomas The Tank Engine

I once saw a film called Billy Elliot. It was a grim and slightly edgy drama about an impoverished family in 1980s County Durham, in the heart of the miner’s strike. It was a story about the sacrifices we make to help the people we love, and a father and son discovering what was most important to them. Most of all it was about an eleven-year-old boy defying all the stereotypes to become a ballet dancer in a time when this was considered effeminate, sissy; something Boys Didn’t Do.

If the millennials reading this are having a hard time comprehending this state of affairs, here’s a confession: I have an aunt who got her son to do ballet when he was a child and the wider family generally disapproved. We never said so, at least openly, but there were fears that she was suppressing his masculinity by banning the footballs in favour of the pumps. This was not considered a particularly toxic viewpoint; my aunt, instead, was considered the odd one. She’s also a practising naturist, something else the family never quite squared, although Emily and I followed in her footsteps this summer on a beach near Swanage, where all six of us thoroughly enjoyed ourselves. Essentially my opinion of her has softened quite a bit with the passing of several decades, which is kind of what happens when you get out from the echo chamber of your closest relatives.

Back in the present day, there’s a programme on CBBC that Daniel loves but pretends he doesn’t. It’s called The Next Step and it tracks the activities of a fictional dance studio in Toronto – one of those fake fly-on-the-wall documentaries, only not done terribly well. Characters fall in and out of love and creepy princes set up intense first dates wearing the sort of tuxedo that should have stayed in 1979 where it belonged. There are rivalries and egos and comical misunderstandings. There are girls crying in darkened rooms because they can’t go to Regionals and it’s, like, THE END OF MY CAREER. Most of all, there is dancing. Oh, so much dancing. It’s a shame they never dance to anything good. There’s no Prodigy. Not a whiff of Irene Cara. They don’t even have Walk The Moon, for the love of sanity. There’s a lot of generic stuff that leaves you utterly cold, which is kind of what –

– but hang on, I’m getting ahead of myself. 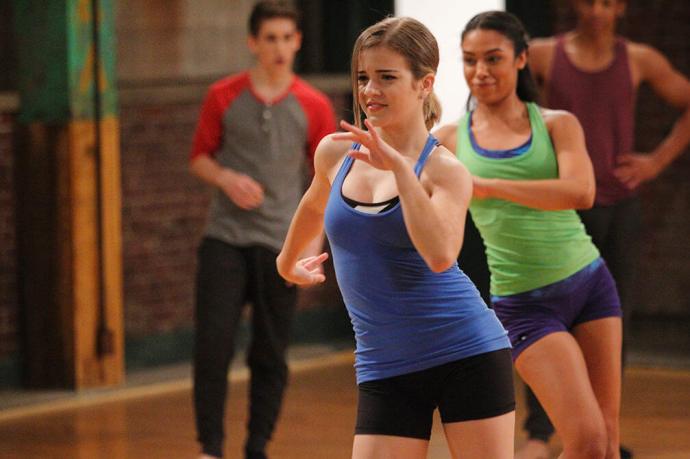 If you’ve seen it, you’ll know the tropes only too well. There’s the couple whose relationship Gets In The Way Of Things. There’s the squabbling over who gets to do the solo. Meanwhile, girl X has an injury but really needs to dance in this video, dammit, so continues to push herself and lie to everyone else that she’s fine when we all know she’s going to collapse in the middle of that crucial, placement-determining solo. And then there is the bitter rivalry between Michelle and Emily that escalated into a kind of Civil War scenario (which would effectively make Ozzy Peter Parker, right down to the spectacles). Previously, on The Next Step: Riley is tortured by the kiss that she shared with Alfie, but she can’t actually tell us how she’s feeling, so she’s going to express her emotional state using the medium of interpretive dance. You’re a tree, Riley. A single tree, billowing in the wind. Oh, you beautiful snowflake, you.

Most bizarre of all is their penchant for talking heads monologues conducted in the present tense about things that are actually happening at that moment. “I can’t believe Jacqui’s actually doing this,” says Noah, shaking his head. “There’s me, trying to get this segment together, and I asked her for contemporary, and she’s given me hip hop. This is not what I wanted.” This is during the scene, the monologue interspersed in between awkward pauses and some pretty intense staring. Or there’s Kingston, waxing lyrical about a particular routine, while he’s still in the middle of the routine. “The choreography’s tight and I’m enjoying myself,” he says to camera, between pirouettes. “This whole thing seems to be going pretty well”. 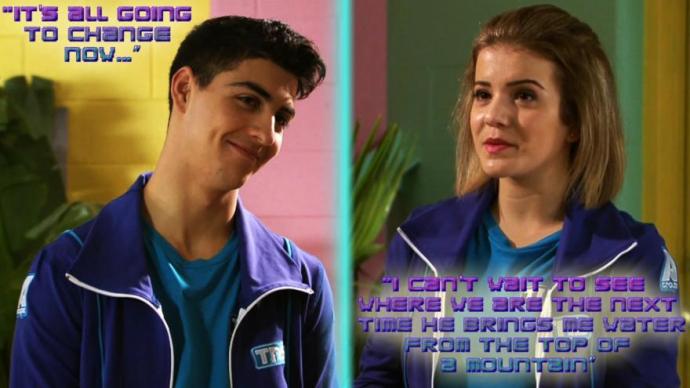 There are two conclusions we’ve drawn. Either this is all taking place later and for some unfathomable reason they’re describing it in the first person, or it’s all happening in their heads. I like that explanation – it’s a crummy studio with an inflated sense of self-importance, imagining its own documentary – and this tech-savvy daydreaming doesn’t detract from the authenticity of the experience (or, as Albus Dumbledore would have said, “Of course it’s happening in your head, Riley, but why on earth should that mean that it isn’t real, girlfriend?”). But perhaps there’s more to it than that, and perhaps there’s a bunch of cutting room floor stuff we’ll never get to see.

West [talking head]: I’m feeling pretty confident about this piece now, and getting into it. I like the way Eldon’s working with this piece, and I know I was sceptical about Emily’s choreo, but I’ve gotta say that –

Still, the great thing about The Next Step is that it features male and female dancers alike, doing all kinds of styles, and the whole idea of boys doing ballet is seemingly never mentioned. Everyone just gets on with it. The Next Step is thus absolutely geared towards both genders (yes, yes, and everything in between, don’t start on that), even if the bulk of the feedback I hear on TV appears to be from young girls. Daniel is now in the latter stages of fandom, having stopped denying that he enjoys it. And irrespective of the rather cynical tone I’ve taken today, I find it pretty compulsive viewing myself. The actors acquit themselves well and there are some beautifully executed moments, like when Elliot the duplicitous bastard (to give him his full rank and title) was exposed for the nob-end that he really was. No one likes you, Elliot. Go back to Broadway.

Elsewhere on the internet, some bright spark decides to take the theme from Thomas The Tank Engine and stick it underneath the ‘Single Ladies’ video, where it turns out to be the perfect accompaniment. So I thought I’d do the same thing, just for the hell of it. There are multiple episodes therein, and the sync isn’t quite as tight as I’d like it to be (thank you, YouTube upload process) but the whole thing just about hangs together. And god knows it’s better than some of the crap they dance to on the show. I just hope there’s no confusion and delay at TNS East. That’d be a disaster

Incidentally, my cousin’s turned out fine.