I Wasn’t Expecting That. Or This

Look, I’ll be honest: I hate this song.

Oh, there’s nothing wrong with it per se. It ticks all the boxes for structure, the production is sparse but musically pleasant, and it sounds so much like Ed Sheeran my supposedly trained musical ear was convinced it really was him until I actually Googled it. It’s just very 21st century: acoustic, casual and shamefully manipulative, the sort of thing that Radio 2 presenters love, appealing as it does to the middle aged, middle of the road sensibilities of much of their audience, as well as grieving husbands and wives everywhere. You want to do a Jeremy Vine segment about terminal illness? Stick this on the decks and watch the Twitter feed jump through the roof.

What’s more, the lyrics are dumb. “It was only a smile / But my heart it went wild / I wasn’t expecting that”, sings Jamie Lawson, which is all well and good, but this is a man who apparently goes through his entire life surprised by everything it throws at him, which suggests he ought to work on honing his instincts. I don’t mean to be disparaging, but seriously, if every single aspect of your love life comes as a complete and total surprise then you have no control over it, and that basically means you’re coasting, relying solely on the decision-making abilities of people close to you. I’m imagining it’s the girl wot wears the trousers in this relationship, and who, despite putting up with him for two or three decades (long enough to raise a family and push them out into soulless flat shares and dead end telesales jobs) laments certain recurring traits and phrases.

“Steve, any chance you could help me with this Ikea cupboard?”
“Yep.”
“Oh, that’s strange. I thought we’d ordered beige. This one is teal.”
“Hmm. I wasn’t expecting that.”
“Oh, fuck off.” 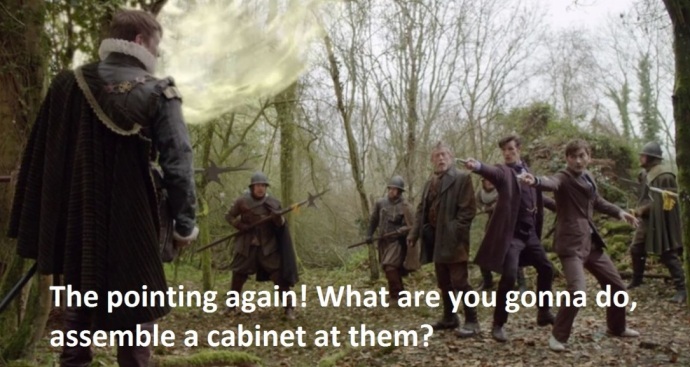 ‘I Wasn’t Expecting That’ also makes the mistake of spending most of its running time talking about the early stages of the romance, before suddenly cramming thirty years – and a sudden death – into the last thirty seconds. It’s like watching ‘Heaven Sent’, although at least that one sort of worked. I said before that structurally it was sound: retrospectively I’m not so sure.

Still, people seemed to like it, and there is an obvious Doctor Who tie: Matt Smith’s oft-quoted outburst from ‘The Lodger’, one of his funniest and most underrated episodes (and I genuinely don’t understand the hatred for James Corden; Craig is awesome). I can’t remember where I was when it struck me that this would be a perfect song for the Eleventh Doctor’s karaoke session – probably the shower, that’s usually how it works – but it was a starting point. Sometimes starting points are notoriously difficult to flesh out. This one, once I’d severely truncated the song to remove the verses that weren’t going to work, came quite easily.

What the official video does is actually quite clever: like ‘The Scientist’ before it, it tells the story in reverse, so the wife is dying on a hospital bed at the beginning and meeting her husband-to-be for the first time just as Lawson is singing about cancer. I thought briefly about replicating that, but then discovered someone else had done the same thing with the Doctor and Rose (always Rose. Why is it never Romana?). Instead, this actually takes its cue from a Christmas video. There are lots of them about, but one of the best I’ve ever seen was this one.

I’m beginning to regret even embedding that, to be honest, and it’s not even because it’s still the middle of summer. I mean it puts my feeble efforts to shame. Look, Babelcolour are the people us amateurs all aspire to be, OK? And sometimes that needs a public acknowledgement. Sometimes we must pay tribute to the gods and recognise our own unworthiness.

Anyway, the best bit of that Shakin’ Stevens offering is around the 2:30 mark, after the key change, when all hell breaks loose. That’s the kind of vibe I wanted, although it’s more of a slow build-up, in which one gradually realises (following Capaldi’s guitar-playing) that this is not to be taken seriously, than a sudden explosion of silliness. It’s simply a question of finding inappropriate clips – disembodied hands, dissolving babies, or that bit where Suranne Jones sinks her teeth into the Doctor’s neck. It’s like kissing, only there’s a winner.

The whole thing is a bit rough around the edges, but I think we just about got there. If nothing else it has a nun falling down a lift shaft. You weren’t expecting that, were you?

Categories: Videos | Tags: doctor who, eleventh doctor, i was not expecting this, i wasn't expecting that, jamie lawson, matt smith, the doctor's wife, video, videos | Leave a comment