Review: The Empress of Mars

I was at primary school with a kid called Steve. We all called him Spud, presumably because his head was unfortunately potato-shaped. He didn’t mind. Steve was a polite, if academically disadvantaged young man, and we were good friends. His parents divorced before we’d finished year 6, which was a bigger deal back in 1988 than it is now. He was a latchkey kid with access to the fridge and borderline unsuitable reading material. It was a different world.

One afternoon we were in the kitchen sharing a Diet Coke when I noticed his father was watching the end of something. The two of us looked round the door of the lounge: an actor, stabbed in the chest, staggering across a platform, evidently milking his death scene for all it was worth. He raised his face to the heavens and bellowed the single line of dialogue my brain recalls from that afternoon: “ODIIIIIINNNNN!!!!”

Thirty years on, I still haven’t seen The Vikings. But Bill has – and I’d be willing to bet that Mark Gatiss has as well. And as it turns out, that isn’t a bad thing.

There are writers who strive to forge ahead – for whom the most important thing is to tell new stories, or find new ways of telling those stories. And then there are writers who take their cue from the past. Gatiss has always struck me as one of those: a man whose Who-related work is rooted in the 1970s, in a self-conscious manner that flits between mind-numbingly tedious and tremendously enjoyable, depending on the episode. The criticism he receives is somewhat mystifying, given that a great deal of it seems to come from the very same component of the fanbase who actively petition for David Tennant’s return: a stilted, insular, nostalgia-driven quadrant, for whom the only way to fix a show that’s well past its prime is to make it exactly the same as it was, which misses the point so drastically I don’t have the willpower to unpack it.

I first learned to love Mark Gatiss around the time ‘The Crimson Horror’ first hit: in a pondering, occasionally tedious series (and in the wake of an absolute clanger of an episode) it was a breath of fresh air, a story that wasn’t ashamed of its legacy and that eschewed self-importance in favour of…well, fun. It’s an underrated commodity. Stories like ‘Robot of Sherwood’ seldom make the top ten, but they’re fun. Sometimes we forget that Doctor Who is supposed to be fun, so consumed are we in telling everyone how important and groundbreaking it is. One of my favourite moments in the Harry Potter series occurs at the end of Goblet of Fire, where Harry finds a convenient use for the blood money he’s earned from the Tri-Wizard tournament, by investing in the Weasley twins’ joke shop business venture. “I don’t want it,” he says, “and I don’t need it. But I could do with a few laughs. We could all do with a few laughs. I’ve got a feeling we’re going to need them more than usual before long.” 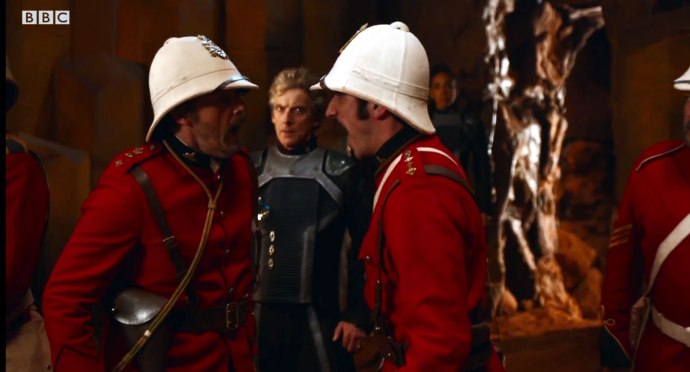 What to say about ‘Empress’? It’s not profound. It makes no real political point, save the kind of digs at the British Empire you typically see on Horrible Histories (a show in which Gatiss has appeared, along with his League of Gentlemen co-stars). It has a lot of stuff about queen and country, including a pleasing Pauline Collins reference. It has an amusing, if fairly derivative cold open – excuse pun – that is enough to draw your interest, even if it does not quite reach the hyperbolic praise that Moffat ascribes to it (“The best pre-titles idea [he’d] ever heard”, according to Doctor Who Magazine, which rather overstates its supposed brilliance). It has a bunch of gung-ho British soldiers speaking an indecipherable language (‘rhino’ is mentioned; I honestly don’t know whether this is colloquially accurate or whether Gatiss is just making this shit up). And it has a new form of squareness gun: it literally folds people up in a sort of fatal compression, useful for packing suitcases. (Gatiss describes this as “a new way of killing people”, suggesting that he’s never read The Twits.)

More to the point, it has Ice Warriors. The throaty voices from ‘Cold War’ are back, but you don’t hear an awful lot of them: there is but one grunt, a tea-brewing local who is mostly silent, leading you to wonder at first whether we’re back in ‘Doctor’s Wife’ territory. The episode is also graced with a brand new Ice Warrior, the titular Empress, frozen in carbonite and equipped with a distinctive, Predator-style helmet that presumably comes with its own feed of 1980s action movies, beamed straight to the eyepiece. She moves a little like Eldrad and growls like Sarah Parish in ‘The Runaway Bride’, with a similar mindset. Not that Iraxxa is irrevocably genocidal, of course – like the most rounded supporting characters her mind can be swayed, although she only listens to reason when Bill pleads with her to stop the fighting. Do we take this as a feminist-tinged political commentary on current foreign policy? If so, would that make Bill Diane Abbott, Emily Thornberry or Nia Griffith? Is this a conversation I really shouldn’t have started?

While all this is going on, Nardole is stuck on Earth, in a seemingly malfunctioning TARDIS, which has obviously put its brakes on for a reason, whether the forces implementing it turn out to be internal or external. There’s a certain amount of cast-thinning going on here; Mars is crowded enough and it’s no great secret that Nardole’s presence in the episode was somewhat last minute – we’re back in Nyssa and Jamie territory – so the solution Gatiss (or, come to think of it, most likely Moffat) adopts is to temporarily maroon him. The subsequent appearance by Missy is functional but unnerving, suggesting something else is going on, and the episode’s abrupt conclusion indicates another scene that might have been dropped. It doesn’t work, but one suspects that Gatiss’ hand was forced for the state of the arc.

There are film references galore – Bill’s response to strolling around the caverns of Mars is to liken it to the movies she’s seen, which some may seem as irritating but which is really just a reflection of how contemporary culture works. Relatively contemporary culture, anyway – I was going to write that it was a wonder that she didn’t try and Instagram a selfie with Friday, but the truth is that every film on Bill’s list is at over thirty years old, and it is left to the Doctor to drop in a reference to Frozen. This token nod to the millenials aside, the story is, like much of Gatiss’ best work, not so much a product of its time as much as a product of somebody else’s (or, as someone put it on Facebook last night, “Gatiss’ stuff was great when other people wrote it first in the 70s”). 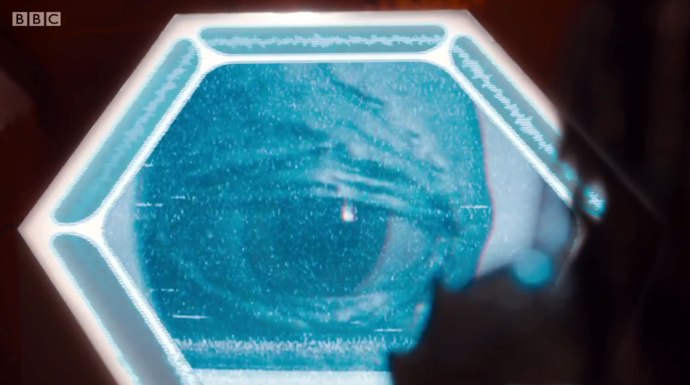 That turns out to work. ‘Empress’ has ‘filler’ stamped all over it, but there is nothing wrong with a decent filler. It doesn’t do anything particularly profound, but it has enough in there to hopefully pique the curiosity of newer fans who have yet to encounter the Ice Warriors properly, without completely destroying anything that was good about the original. Indeed, the appearance of Alpha Centauri, two minutes from the end, was enough to make me jump out of my chair – it is reckless, crowd-pleasing shoehorning, there for no other reason than to appeal to the more experienced fanbase and up the hit counts in the Classic Who groups, but I can live with that, even if most newer fans were probably wondering who on Earth that squeaky-voiced bug-eyed alien was, and why their parents were getting so excited. (At least they have an excuse: the Telegraph, in a review which has subsequently been amended, genuinely thought it was Pauline Collins. I can live with the show being reviewed by non-experts – but seriously, how hard is it to read the credits?)

Some episodes of Doctor Who are destined to set the world alight. Gatiss’ latest will not, but that’s not the end of the world. If its supporting characters could do with a little more depth, that’s a by-product of the forty minute structure (and something which, when Chibnall comes to the table, could do with a serious rethink). The leads acquit themselves more than adequately, even if the Doctor has little to actually do this week except react. And it has Ice Warriors doing Ice Warrior-ish things, in a self-contained narrative that, while popping the odd seam in its bag of containment, manages to just about stay inside it. Profundity can wait: this is fun. Really, what more do you want on a Saturday evening? 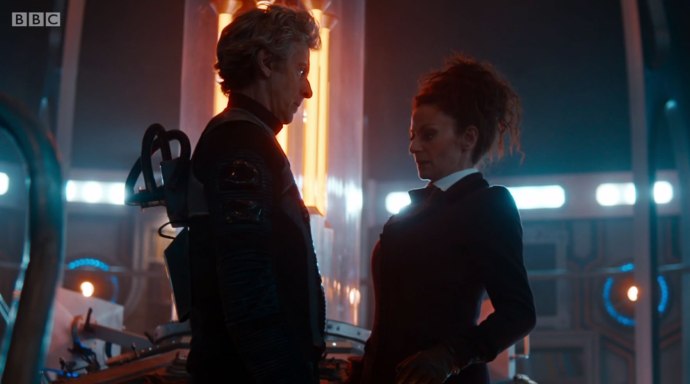 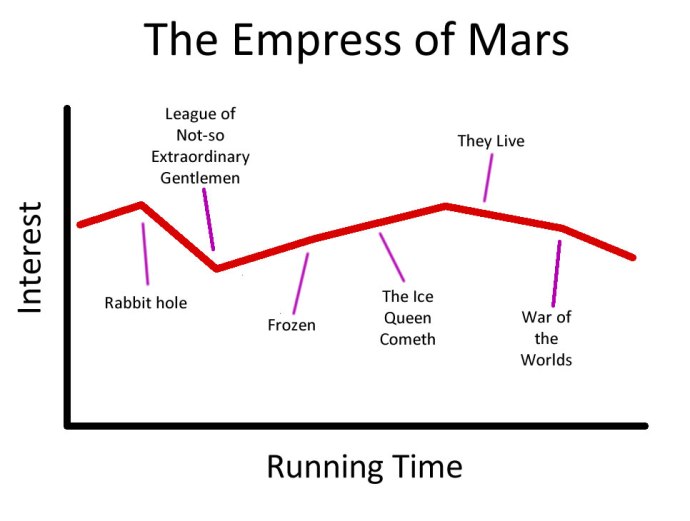 2 thoughts on “Review: The Empress of Mars”