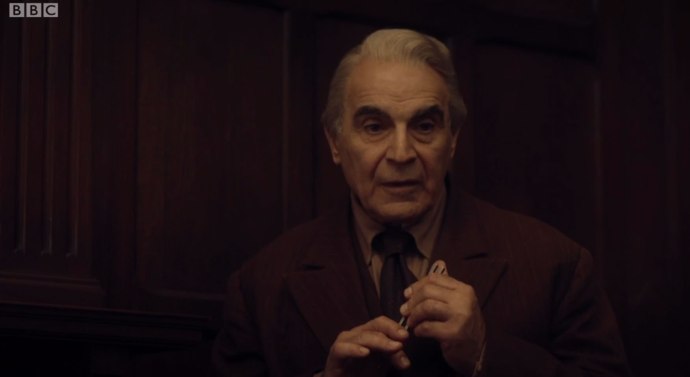 Seriously, why didn’t they run with this title years ago? Is it one of those things the BBC always vetoed, on the grounds that you wouldn’t be able to take it seriously? The sort of title that you embargo because it’s loaded with playground gags? Is that why they went with the horror angle, as if to suggest that yes, there’s an obvious joke, but this story is about sentient woodlice swarms and a woman who looks like the love child of Pinocchio and Medusa? And Poirot is guest-starring?

(As an aside, I should mention that Edward has clearly been watching too much Doctor Who, because the other day we had this:

EDWARD: Knock Knock.
EMILY: Who’s there?
EDWARD: Doctor.
EMILY: Doctor…what?
EDWARD: I WAS NOT EXPECTING THIS! 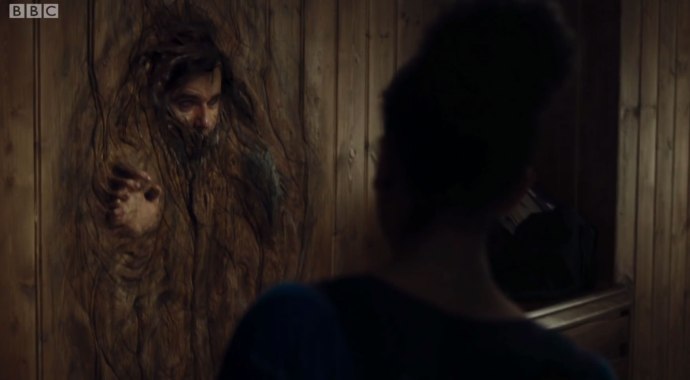 ‘Knock Knock’ opens with a montage. Bill and her friends are exploring properties for a house share – one of them, enthusiasts will note, is comically undersized and about half the height of its immediate neighbours, calling to mind the ‘transformed’ flat that appears briefly at the end of ‘The Lodger’. It seems that no six-bedroomed residence is big enough, so rather than do the sensible thing and siphon off a couple of the less desirable members of the group so they can afford to be less picky, the gang consigns itself to defeat – until salvation arrives in the form of the rather sinister Landlord, who apparently has no name to speak of. Alarm bells ought to be ringing, perhaps, except that one of the unwritten laws of Who states that week on week everyone is supposed to put their trust in a mysterious stranger who won’t tell anyone his name, so to a certain extent it’s business as usual.

The concept explored here is that of separation: the Doctor struggles to bridge the generation gap that suddenly appears when Bill spends time with her peer group. It’s not unlike the episode of Friends when Ross witnesses his student girlfriend caught up in a water balloon fight and realises the relationship isn’t going anywhere. Bill’s desire for a quiet night in is a hybrid of two different sorts of trepidation – her realisation that the Doctor is a magnet for trouble, fused with her need to be a whole and independent person in a way that Rose could never manage. It makes for some awkward moments (the sight of the Doctor dancing to Little Mix is amusing, but the episode would have worked better without it); nonetheless Bill’s desire to keep work and home separate is commendable in an always-on digital age, and it’s kind of sweet that she’s willing to keep the Doctor within grabbing distance but without letting him dominate it the way that Rose and Martha did. “This,” she tells him gently, “is the part of my life you’re not in.” 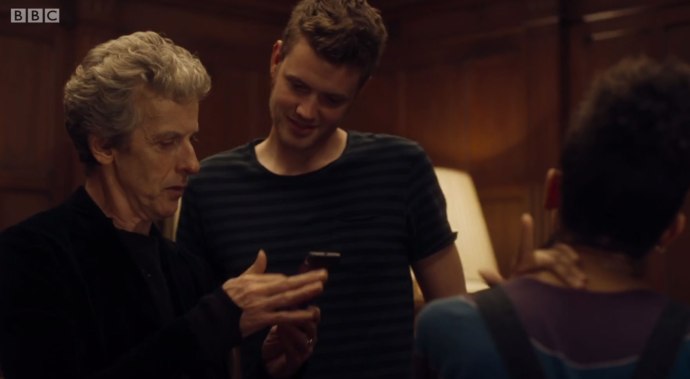 The central problem with ‘Knock Knock’ is that it simply isn’t very frightening. There’s nothing wrong with the setup: six people in an overly large house with dodgy electrics and a seemingly inaccessible tower, presided over by a sinister, seemingly omnipresent figure with the ability to suddenly pop into existence as if from nowhere, like a podgy Q from Star Trek. The contract is signed with nary a second glance at the small print – if anything, Bartlett has written a morality fable for the EULA generation that emphasises the importance of reading the terms and conditions. Only Bill remains wary – but even she is keen to avoid discussing the obvious problems lurking in the house, clearly seeing it as a means of escape. The students’ nonchalance is the sort of behaviour that usually has the audience screaming at the TV, but it’s very easy to do that when you’ve already heard the screams of the house’s first victim, and a seemingly blasé attitude is at least consistent with the jumping in feet first attitude that Doctor Who typically seems to espouse. If something seems too good to be true, it usually is – but how might we apply that logic to ‘the gateway to everything that ever was, or ever can be’?

Even before the credits have rolled the house has already claimed its first victim – Pavel, sucked into a wall as his record player catches in the background (a stylistic conceit that turns out to be a minor plot point) – but the students treat his apparent self-imposed isolation as a trademark characteristic, and it is left to the Doctor to point out, quite late on, that ‘no one does that’. What ‘Knock Knock’ needs is a little more of this and a little less of the mundanity that punctuates the earlier scenes: conversations about Bill’s sexuality spring to mind, as does the question of whether the Doctor is her father or grandfather…actually, can we just deal with that? Because it’s basically the sort of thing that gets shoehorned in to serve as workable fan theory, hearkening back as it does to the moment the Doctor glances both at the photograph of Susan and at his new pupil, as if to draw some sort of connection. It’s obvious where we’re supposed to think this is going, and while I wouldn’t want to hedge my bets as to whether it actually was, I did rather hope that it was the sort of thing they were leaving behind.

The episode improves. If the first half is a series of awkward social encounters, the second half is an old-fashioned ghost story, all shifting walls, banging shutters and things crawling out of the woodwork – in both a literal and metaphorical sense, as family revelations cast the horrific events of the last few minutes into a new light. It’s easy to scorn the Landlord’s behaviour until his relationship with Eliza is flipped on its head, and the new information we receive as a result of Bill’s deduction grants him unexpected sympathy. “There isn’t a little boy alive that wouldn’t tear the world apart to save his mummy,” the Doctor muses in ‘The Doctor Dances’, “and this little boy can.” 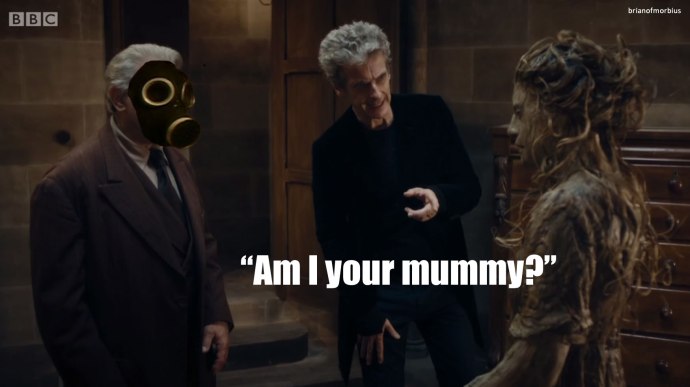 The set works well enough – Fields House in Newport, first seen in ‘Blink’, providing exactly the sort of gothic scare that ‘Knock Knock’ needs – and Bill Anderson brings the same sort of directorial flair he brought to ‘Thin Ice’, albeit with rather less success. The supporting cast really don’t have much to do except complain about the phone reception and then get eaten, but Suchet is reasonably watchable, alternating for the most part between Kindly Grandfather and Psychotic Bookshop Owner – at least until the final reveal, when his voice jumps an octave. Indeed, music figures prominently, from the Bach that opens the episode (stuttering and repeating odd bars, like a DJ’s loop) to the Beethoven that concludes it. Quite why the Master / Rani / Next Doctor / whoever the hell is in that vault decides to follow ‘Fur Elise’ with ‘Pop Goes The Weasel’ is anyone’s guess, but even if it doesn’t mean anything yet, it will by the time the fans have finished with it.

It would be churlish to call ‘Knock Knock’ a bad story: rather it’s a good story with less-than-perfect execution, wobbly and uneven and occasionally tiresome. That it is somehow less than the sum of its parts is partly down to the writing, which is sub-par, and partly the BBC’s heavy emphasis on the horror angle – but without the gumption that, say, Robert Eggers (The Witch) might have mustered. This was clearly an experiment, and while the list of gripes (the fallback on conventional horror tropes; the Doctor’s effective relegation to sidekick status; the Freudian thing) is plentiful, they don’t make for an experience that is unilaterally bad, just one that feels like a disappointment after the last three weeks. But perhaps it’s not a bad thing that the bubble has burst. If this is the first time in the series we’ve had call to say ‘Meh’, then that’s a surefire indication that on the whole, they’re getting it right. 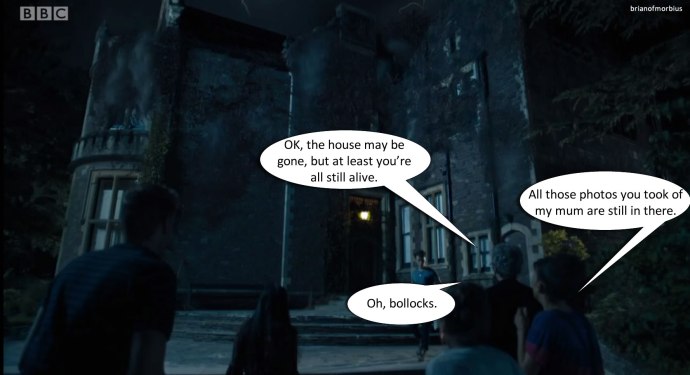 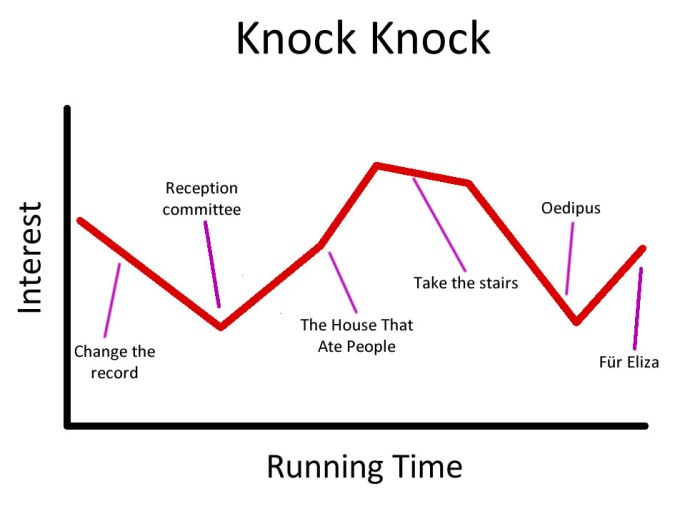