I’m excited this morning. Not because it’s Friday and we’re going to the seaside tomorrow, but because I’ve worked out something ABSOLUTELY COLOSSAL when unpacking ‘Thin Ice’, and it’s all to do with the Eleventh Doctor.

Let me explain. We’ll start with the Sutcliffe residence. 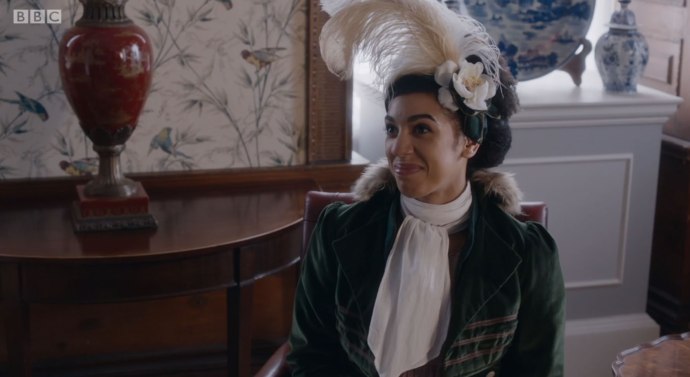 Birds are the theme here. There are so many bird references in this picture it practically deserves its own blog post. For a start, consider Bill’s hat, made of white feathers: a symbol both of hope from beyond and also cowardice, recalling the moment in ‘Parting of the Ways’ in which the Doctor admits that he is a coward – only to be rescued by Rose, as played by Billie Piper.

The wallpaper sitting behind the red urn contains four birds, a clear and unambiguous allusion to ‘The Day Of The Doctor’ – in which Doctors 10 and 11, accompanied by the War Doctor, gather around the Moment, which takes the form of a big red button. Clara lingers in the background, and the sentient Moment itself, as played by – yep, you remember, BILLIE PIPER, lingers just out of shot. The urn itself is a symbol of death and remembrance: moreover the base of the red section is exactly (and quite intentionally) parallel with Bill’s nostrils, which itself conjures images of the Curator winking at the Eleventh Doctor, tapping his face and whispering “Who knows?”

Also consider the willow plate, which refers explicitly to a particular legend, in which two forbidden lovers are transformed into birds by the gods in order to cheat death. And yet it is the traditional (read: author untraceable) poem that surrounds the tale that is perhaps of greatest interest:

Two birds flying high,
A Chinese vessel, sailing by.
A bridge with three men, sometimes four,
A willow tree, hanging o’er.
A Chinese temple, there it stands,
Built upon the river sands.
An apple tree, with apples on,
A crooked fence to end my song.

You’ll notice I haven’t circled ‘willow tree’, and that’s because it deserves a separate explanation, alluding as it does to the Willow Tree Surgery in Hayes – a town that was used for location filming during ‘Day of the Daleks’. And what do you find in a surgery? Doctors. NEED WE SAY MORE?

The notion of the Third Doctor continues once when we visit the docks, and Bill’s big pile of poo. 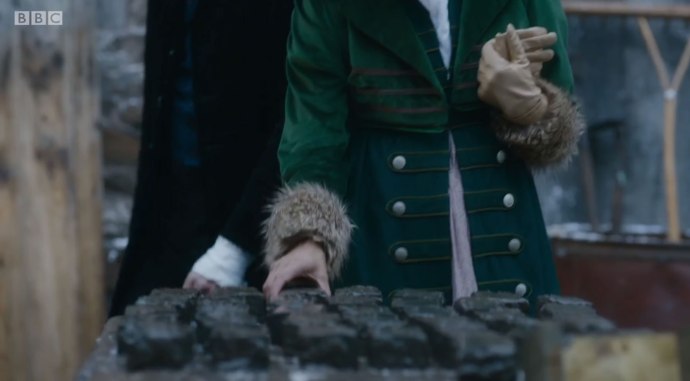 There are 26 discernible bricks in shot, representing two sets of canonical regenerations, and you will note that Bill has her hand on the third of them. You will also note that Bill is wearing a velvet bottle green jacket, an outfit the Third Doctor often dragged out of his wardrobe – and that three buttons are visible on the left hand side (as we look at it). However, the Third Doctor isn’t the only one referenced here: note the cuffs, made of the same kind of hair used to construct the Yetis which the Second Doctor fought – and which were a product of the Great Intelligence, WHOM THE ELEVENTH DOCTOR LATER ENCOUNTERED.

Now have a look at this. 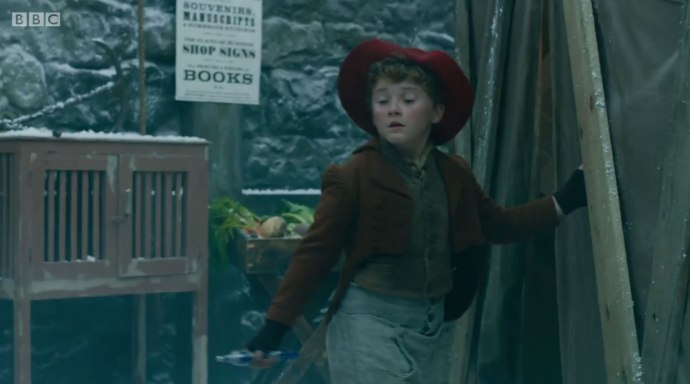 Cages – and birds – are once more the theme here, but it is the sign in the background that arouses particular interest. Because if we examine the big words – clearly THE ONLY ONES WE’RE SUPPOSED TO BE ABLE TO SEE, we’ll detect a curious pattern if we pick them apart. And this being episode three, here’s what we get if we pull every third letter from them.

All of which may be rearranged to form ‘SPUN NSP BOG‘, which ostensibly means nothing until you Google NSP, whereupon the fish scales fall and you can see with astonishing clarity. Because NSP is an acronym for ‘Nurse Scheduling Problem’.

I’ll just leave this here for a moment.

[Pauses to allow mind-blowing implications of this sink in]

Let’s move on, shall we? Behold: a banquet.

There are four glasses of milk. This in itself means nothing until you consider that the chemical formula for lactose is C12H22O11, which may be broken down thus: 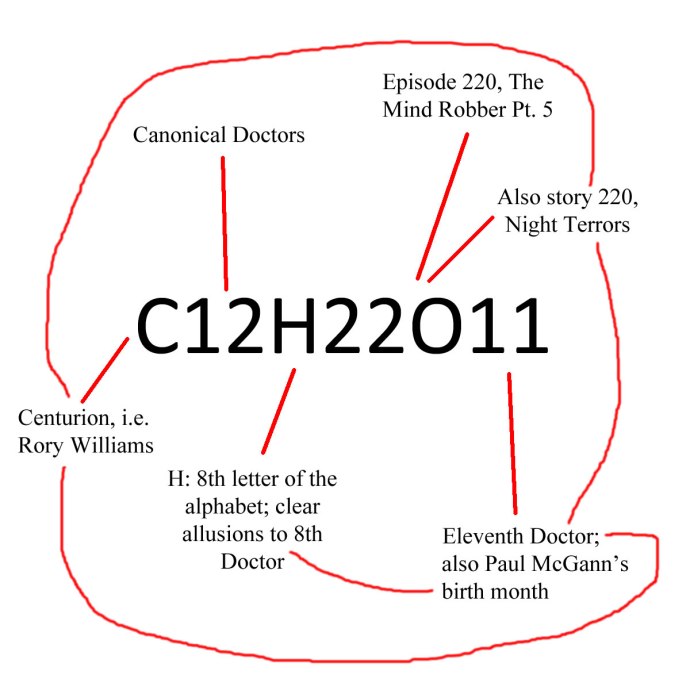 The five plates in the background refer to ‘The Five Doctors’, the 1983 anniversary special: note that Doctor Three is positioned directly above a silver bowl. This alludes not (as you might expect) to the Cybermen, but rather the Raston Warrior Robot, which the Third Doctor (yes, HIM AGAIN) and Sarah Jane so memorably encountered in this story, and which is due to IMMINENTLY RETURN in the series finale, along with Peter Davison. The painting above – a clear depiction of the Great Fire of London, which Davison’s Doctor helped start in ‘The Visitation’, is further evidence – as is the fact that ‘THE VISITATION’ can be rearranged to form ‘HAITI OVEN TITS’, and I think we all know what that means, don’t we?

Finally in this image, regard the holly on the table. Specifically, holly in the house of a dignitary – a CLEAR AND UNAMBIGUOUS REFERENCE to Holly Earl, who played Lily in ‘The Doctor, The Widow and the Wardobe’ – WHICH FEATURED RORY WILLIAMS. Coincidentally, Holly also played Christine Kochanski when she was momentarily transformed into a child back in Red Dwarf VIII, which has nothing to do with anything except that she was so goshdarn cute.

Oh, and did I mention that the crew were running away from a dinosaur? Everything is connected, folks. Everything.