I walked into the study on Monday morning to find the boys watching a Lazy Town video. Backwards.

It beats the hell out of some of the stuff I find in the internet history. I mean, I love YouTube. It’s a wealth of fantastic, entertaining material. It has recipes, educational videos, how-to guides and interviews. It’s enabled me to see programmes I haven’t seen in years and ones I’d forgotten about completely. It’s connected me with musical artists in ways I wouldn’t have thought possible, shown me ideas and concepts I could never have imagined and, for all the idiocy and bigotry, generally broadened my horizons.

And what were my kids watching the other week? Fucking Crazy Frog. Backwards.

It’s hardly Twin Peaks, is it? It’s quite amusing to watch Sportacus climb back into his cage while Robbie and his clones skip backwards over the wall, but you wonder what the point was. And then you look at the other stuff on the channel and you notice a pattern in the titles –

HOW THE HELL HAS THIS GUY GOT SO MANY HITS? Do people like Lazy Town that much? Or is this another artificial inflation scam like the VEVO incident? I mean, here’s me, scrabbling for social media coverage, begging and borrowing and promoting like crazy just to creep into the hundreds, and this guy’s presumably living off his monetization. It’s enough to make you weep for the future of humanity; it really is.

The definitive use of reversed footage, of course, is in Red Dwarf, in an episode that isn’t really as funny as we’d like to think (gimmicky episodes seldom are, as ‘Gunmen of the Apocalypse’ proves in abundance). There are amusing moments in ‘Backwards’ but the best of the humour stems from Lister’s reactions (“Santa Claus – what a bastard!”), as well as that single shot of Cat, springing up from the bushes. But a better episode that series is ‘Marooned’, which is almost a two-hander, but which has some of the best gags in the history of the show. ‘Backwards’ has Lister falling off a bicycle. ‘Marooned’ has Rimmer doing the funniest Richard III you’ll ever see. Case closed. 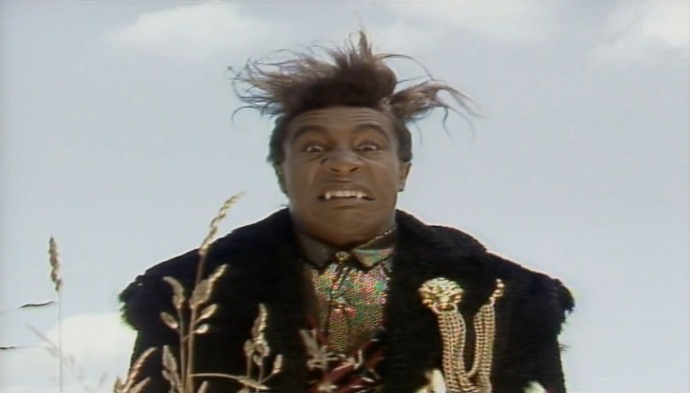 Anyway, I started to think about whether I could take anything from Doctor Who and run it backwards. I’ve occasionally reversed small clips in isolation – the Beckett video springs to mind – but was there any merit in anything longer? The problem was picking an appropriate scene, and seeing that inspiration was lacking I decided to ask Facebook. Someone suggested Clara’s death scene. “Anything with the Weeping Angels”, said someone else. “It’s just them backing away from people.”

There’s a lot of mileage in a scene like that but one obvious example – inspired, in part, by the scene in Red Dwarf where Rimmer and Kryten observe a woman regurgitating a cream cake – was the Fish Fingers and Custard sequence. Because it’s a wonderful moment that’s been done to death and had all the life sucked out of it with subsequent references (Why, in the name of sanity, does the TARDIS interface say ‘Fish fingers and custard’ to the Doctor when he’s lying on the floor halfway through ‘Let’s Kill Hitler’?). There is absolutely nothing new I can bring to that scene apart from reverse it and witness the Doctor’s telekinetic summoning of a reassembling plate across the garden, before sucking baked beans back into his mouth.

But what’s most striking about it is how similar it sounds to Nordic noir. As I was watching it – and particularly after I’d dropped in the background ambience, which comes courtesy of the lovely people at Cryo Chamber – it felt like I was watching a scene from The Bridge, or Modus, or Wallander (I assume; that’s one I’ve not seen yet). The analogy’s far from perfect, of course. Amelia’s house isn’t nearly Nordic enough. There’s not a single glass wall. She doesn’t even have decking. Nonetheless, the vibe is there. It’s the dialogue: it all sounds like Swedish.

And that’s given me another idea, but you’re going to have to let me finish it first…