It was a little after one in the afternoon and the six of us were gathered round the dining table. The conversation had – for reasons I now can’t recall – turned to the subject of boobs.

I mean, what is it with young boys and inappropriate table talk? If it’s not boobs or bottoms it’s fecal deposit, the colour and texture of vomit or the ins and outs (quite literally) of sex. We have a set of dining rules stuck on the wall, and number ten – the one I call them out on most frequently – is “Don’t talk about anything unsuitable for mealtimes.” Perhaps that’s it. Perhaps it’s like a magnet, an invitation to see how far they can push us before we inevitably snap.

“Anyway,” I eventually said, not entirely seriously but with an attempt to restore a modicum of decorum to proceedings. “You really shouldn’t say ‘boobs’. You should say ‘bosoms’.”
“Oh,” said Josh. “I thought that was that religion.”
“That’s Buddhism.”

Honestly? It’s easy to mishear things. Particularly if there’s one word that you’re accustomed to, and another less-used word sort of sounds a bit like it.

Is it a coincidence that I started to eat a lot of Brie right around the time I last saw ‘Fear Her’? I genuinely don’t think so.

My father grew up in Tunbridge Wells, and while my grandparents were alive we often went back there. You spend enough time hanging around Royal Victoria Place, certain things stick. I can still remember the grubbiness of the local Our Price, the semi-organised clutter of the small independent video game shop that was – as was so often the case with such things – there and then not there, like something from Terry Pratchett. And I can remember Fenwick, the department store that my grandmother insisted we visit one Saturday morning to have lunch, planning the whole thing with military precision and presenting, perhaps for the first time, an indication that her mental faculties were not what they were.

So in years to come, when I would familiarise myself with old Doctor Who stories, it was easy to misread ‘The Curse of Fenric’ as something entirely different. 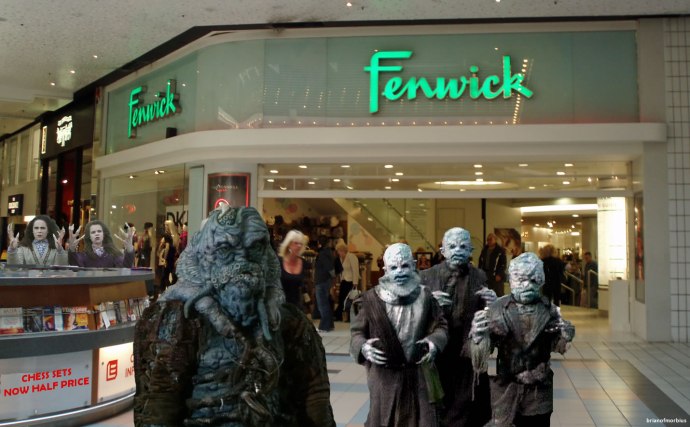 Anyway: the whole thing with Buddhism reminded me of a conversation I’d had with Daniel a year or so ago in which we’d discussed watching New Who: I was at that stage still trying to pick out random episodes I thought he’d like, before we eventually made the decision to watch them all.

“I think you’d enjoy The Fires of Pompeii, actually.”
“What’s Pompeii?” he asked.
“It’s an ancient Roman city. They had a volcano.”
“Oh. I thought it was those crisps.”
“That’s Pom-Bear.”

Categories: Have I Got Whos For You | Tags: doctor who, entertainment, fear her, television, the curse of fenric, the fires of pompeii | Leave a comment