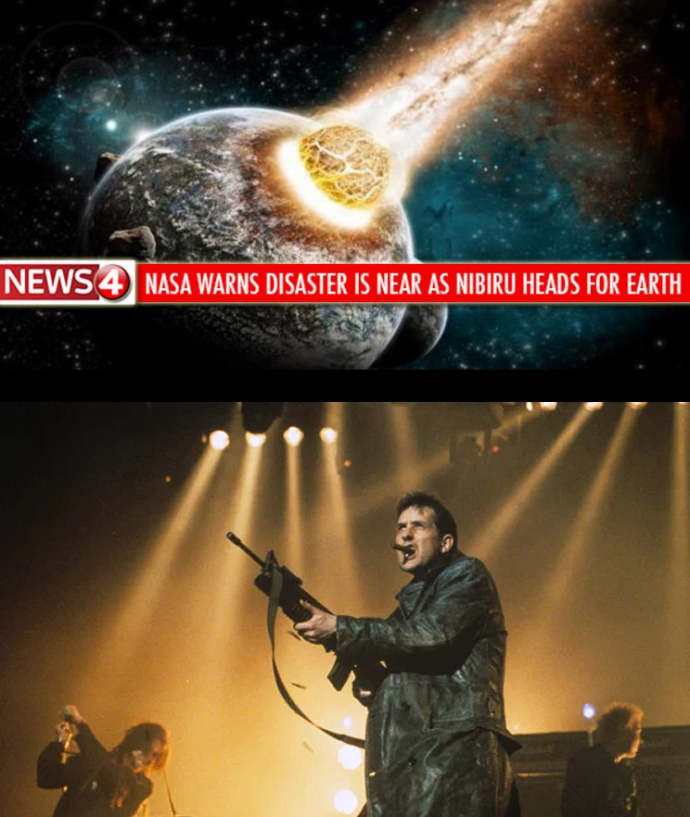 It’s a good week for conspiracy theories. Nibiru is supposed to be returning. And the KLF – those enlightened Illuminati-conncted tricksters – have announced they’re planning something. Sort of. They’re not calling themselves the KLF these days, nor indeed was this anything other than a five-minute fad when viewed within the context of a thirty-year career. Still, they’re back, and thus there is much rejoicing.

But never mind that. We’re here to talk about ‘The Return of Doctor Mysterio’.

Christmas specials may be accessible, but that doesn’t mean they have to be simple. As is customary under Moffat’s reign, the latest episode of Doctor Who is in fact positively crammed full of IMPORTANT SIGNS AND CLUES that will be HIGHLY SIGNIFICANT later on. The problem is that most casual fans lack the time and the ability to decode them. Luckily you have me. So let’s unpack this treasure trove of layered meaning and find out what’s really going to happen in series 10, shall we? 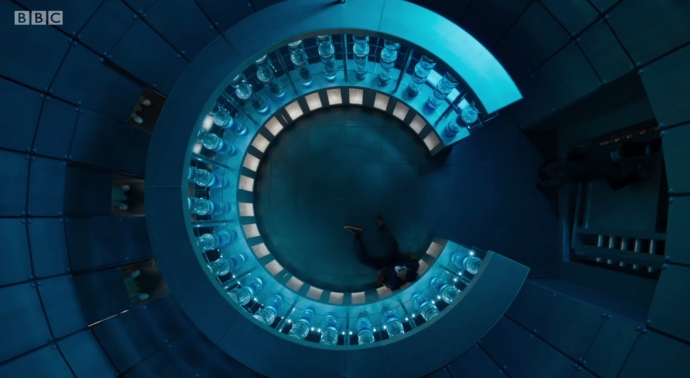 There are precisely 24 columns of jars in this image – each column containing three jars, totalling 72. You’ll be aware by now if you’ve been following this series that these numbers are never just a coincidence – and in this case it all points to the Seventh Doctor.

How may we infer that from this image? The use of 24 columns is a big giveaway, given that season 24 is the Seventh Doctor’s first. Moreover, 72 refers to the 72nd story in the canon, ‘Death To The Daleks’ – which, despite being a Third Doctor story, eerily foreshadows the Seventh Doctor’s destruction of Skaro in ‘Remembrance’, some 14 years later. (Tangentially, if we substract 14 from 24 we are left with 10, and we may thus infer that this will all be connected with a returning appearance from David Tennant – but we’ll come back to that when we explore one of the other images.)

The C-shape this forms is actually a whopping great red herring, because what you actually need to do is turn it on its side. 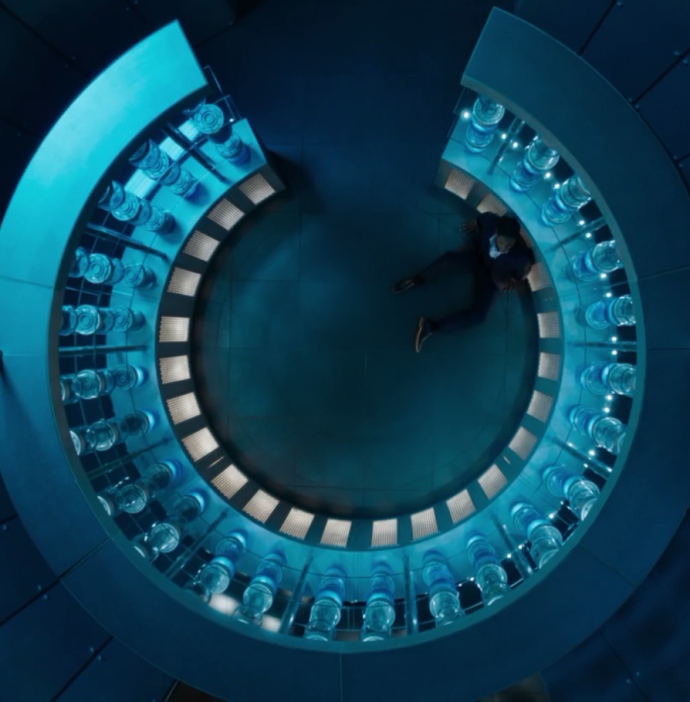 Viewed from this angle it is obviously a horseshoe. Horses were ridden by the Cheetah People in the last televised Doctor Who story of the 1980s, which (not so coincidentally) starred the Seventh Doctor.

It is also worth noting that in order to acquire this particular viewpoint it is necessary to tilt your head on one side. THIS IS NOT A COINCIDENCE. The other recent villain known to adopt this perspective is the Family of Blood. Which, by the way, featured in a Tenth Doctor story.

How many jars are featured in each column in that first image? Three. And what do you get if you subtract Seven from Ten? I’ll just leave the colossal implications of that dangling there for a moment, because we must speak of them in hushed tones. THEY ARE NOT TRIVIALITIES.

We’ll come back to the Tenth Doctor later but in the meantime let’s have a look at this. 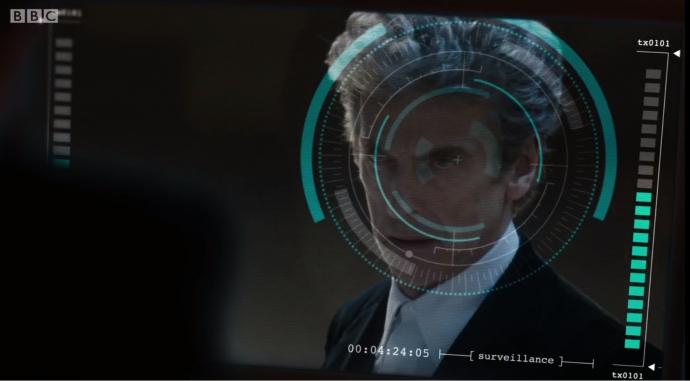 There’s that number again: 24. Specifically story 4 in series 2, ‘Dragonfire’, which introduced Sophie Aldred, WHO ALSO RODE A HORSE IN ‘SURVIVAL’ AND HELPED THE DALEKS BLOW UP SKARO AND WHO APPEARED IN TREE-FU TOM OPPOSITE DAVID TENNANT.

The column of green lights on the right of the screen ought to be self-explanatory, referring as they do to the twelve canonical Doctors (and omitting John Hurt) and leaving room for a further nine, making the BBC’s long term plan for Doctor Who as transparent as if they’d organised for it to be leaked by one of those ‘sources close to the show’. But what are we to make of the mysterious ‘tx’? Could it refer to the TX witnessed in the third Terminator film? The postal code for Texas, indicating a possible Doctor Who / Preacher crossover?

Now, that I’d watch. The truth, sadly, is far less spectacular, although it is still highly significant: it refers, instead, to the Tsukuba Express, the Japanese railway line linking Tokyo and Tsukuba. Launched in 2005 – the same year Doctor Who returned, which is not a coincidence – the route follows twenty stations, but it’s the name itself which causes most intrigue. Because the words ‘Akihabara and Tsukuba Station’ may also be reformed to make ‘AA! AA! AA! SKITTISH ABBOT UNDRUNK!’, which is an indication that PHILIP MORRIS HAS BEEN LYING TO US AND THEY HAVE ALREADY FOUND ‘THE MASSACRE OF ST BARTHOLOMEW’S EVE’. 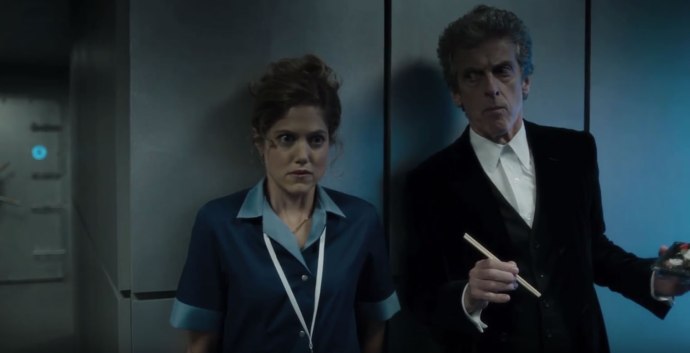 We also might point out that ‘The Return of Doctor Mysterio’ directly foreshadows this early in the episode when we observe the Doctor eating sushi (seen above). Although we might also conclude that its sudden disappearance when he’s walking down the stairs indicates the return of the Crack In Time. But that would be silly, and as everyone who reads this column is aware, I don’t do silly. 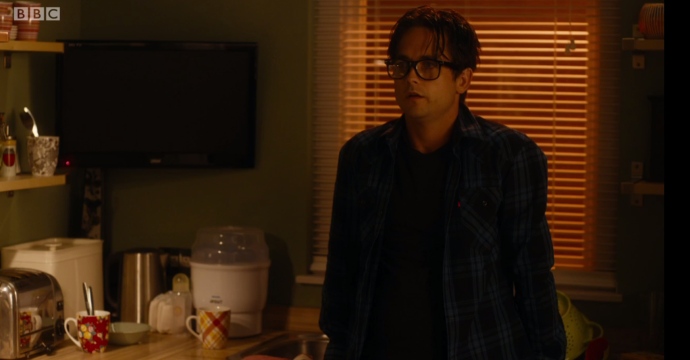 It’s those mugs on the counter you want to be examining. Note the striking multi-coloured design (favouring red) on the left and the plaid on the right. And you’d be forgiven, at first glance, for assuming that this was a reference to ‘The Two Doctors’. I mean, it’s obvious. 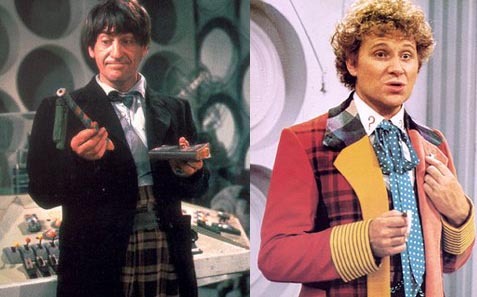 But as is traditional with these multi-layered shots, the true meaning is hidden until you look closer. Note the proximity of that red mug to the toaster. Note also that the mug can be seen reflected in the surface of the toaster, and that THE SEVENTH DOCTOR LOATHES BURNT TOAST. Conclusion? We are going to revisit the Sixth Doctor’s regeneration story, only this time it will be televised in the form of a flashback experienced by the Twelfth. How do I know this? Consider the spoon dipped into the Sixth Doctor’s mug – the Twelfth Doctor’s weapon of choice, and the Seventh’s favoured musical instrument.

The other mug confirms this theory, given that it contains a cryptic reference to Spaceballs. 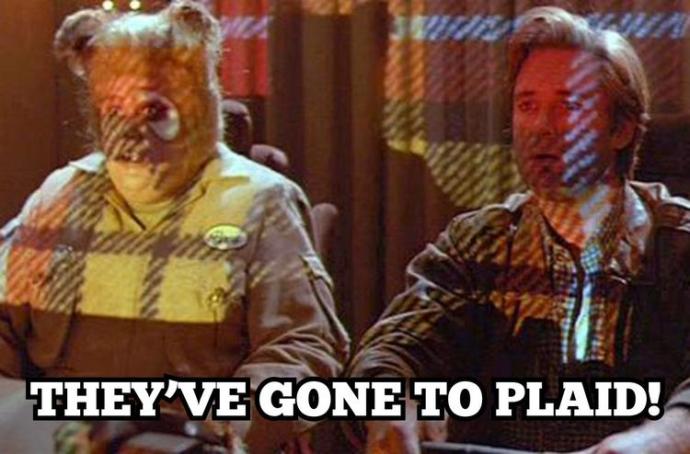 The Doctor Who connection ought to be transparent: it’s Bill Pullman, last seen in series four of Torchwood. And any fan will tell you that this was also the last time we saw Jack – apart from The Five(ish) Doctors Reboot, in which John Barrowman drives the Fifth, Sixth and Seventh Doctors from London to Cardiff. In doing so, he evicts David Tennant’s daughter from the car. From this we may IRREVOCABLY AND UNAMBIGUOUSLY CONCLUDE that next year’s Christmas special will feature a cameo by the Tenth Doctor, in the company of Jack. 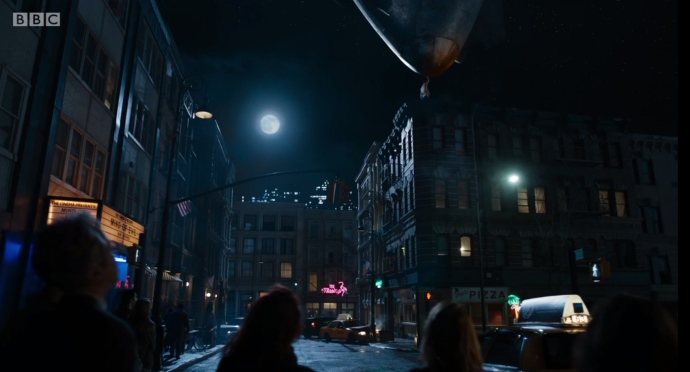 Oh, there’s so much to unpack in here we barely have time. The most transparent of references is the Third Doctor story that’s playing at the cinema on the left hand side. (You will note also the proximity of the American flag, sticking out of the wall like the entrance to an embassy, and that ambassadors played a crucial role in this story.)

The references to ‘The Mind of Evil’ are reflected in the pizzeria across the street – owned and presumably operated by someone named Joe, a direct reference to the Third Doctor’s companion, both in ‘Mind’ and a great many others. But it’s the club in the middle that caught my eye, given that ‘The Missing’ is a CLEAR AND DIRECT reference to ‘The Lost’, the final episode of Class. If you’ve seen that, you’ll be aware that a familiar face pops up, and we may thus conclude that even if Class doesn’t get a second series they will continue that story here, using New York (or possibly the moon, which is prominently featured) as a location.

But it’s the pink that got me. Could it refer to Danny Pink, perhaps, who played a small but important role in ‘Kill The Moon’? Is it a reference to the Pink Ladies from Grease, indicating that there will at some point be a scientology episode, with John Travolta starring? We can only hope. But the answer, when it hit me, was like a bolt from the purple. Because I suddenly remembered where I’d seen a pink TARDIS. 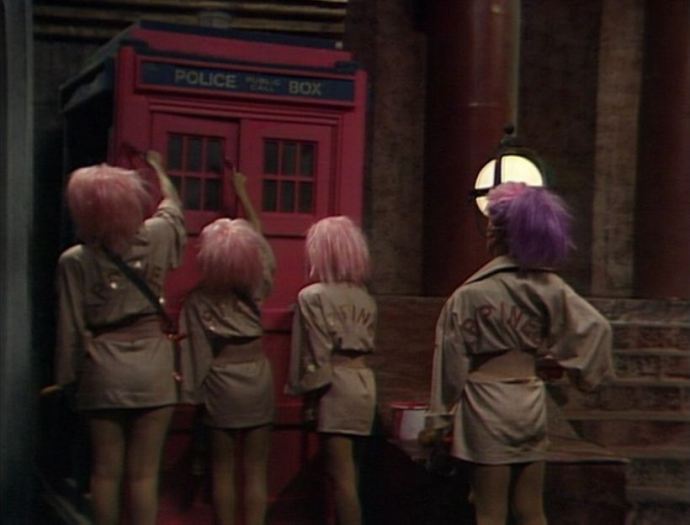 Oh, lucky Seven. It always comes back to you.