Alistair the Toucan does Doctor Who

Doctor Who these days is all about the speeches. In many ways it always has. Oh, it’s easy to point at McCoy and mention the rice pudding as a watershed moment, but to do so is to ignore Colin Baker’s rant about the decadence and corruption of Time Lord society, Pertwee’s wistful recollection of his Gallifreyan childhood, and the Fourth Doctor’s joyous monologue about homo sapiens at the beginning of ‘The Ark In Space’. It even goes back to the sixties: Hartnell’s Doctor may have been doddery and crochety from time to time, but he could wax lyrical with the best of them, as ‘The Dalek Invasion of Earth’ proves as much as any other.

But there’s a trend these days – something that seems to have started with ‘The Pandorica Opens’ and then become one of those things that was fun for about five minutes and then wore out its welcome the more it was done (like Star Wars Day, but we won’t go there right now). I wish I could understand the current obsession with getting other Doctors to record great speeches, but it seems patently ludicrous. Sometimes it works. There is a decent voice imitation of Troughton doing the rounds on the internet that recreates the closing scenes of ‘Day of the Doctor’. McGann, on the other hand, was given Capaldi’s ‘Zygon Inversion’ speech to read (presumably thirty seconds before they switched on the microphone) and it sounds tedious. I’m sorry, but it does. Harness wrote that speech for Capaldi. The Eighth Doctor version would have been quite different. Capaldi bubbles with righteous anger; McGann (and this is not to do him a disservice, I love him) plays a Doctor who seldom loses his temper. It’s the elephant in the room, but it’s embarrassing to listen to, and I say that as someone who thought ‘Scherzo’ was wonderful, if you skip over the love scenes.

Look, it’s perfectly simple. If you can turn a one-trick pony into a convention staple, I can do the same thing with a puppet. Step forward Alistair, who was recorded on my ageing Flip camera, perched on the table, wedged between two books to hold it upright because I couldn’t find the tripod. Alistair messed up the second speech a little, but I didn’t hold it against him. Yes, there are outtakes. No, you do not get to see them. Yes, I did drop the puppet once or twice.

Toucans are marvellous birds, anyway, and just for the heck of it, here’s one I snapped on the Isle of Wight. 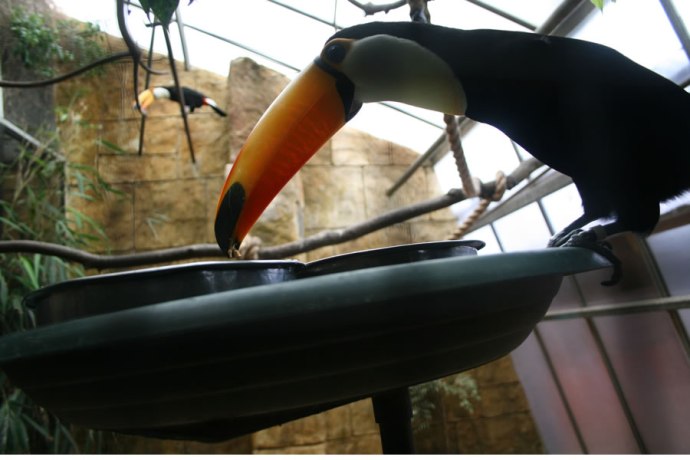 I don’t know. It seemed like a good idea at the time. But I did think this could be a series, perhaps furnished by requests. I’ve already had one for Trial of a Time Lord. Another request went along the lines of “Please cease and desist from contacting our client Ms. Aldred and at all times retain a minimum distance of six hundred yards”. Your own suggestions are welcome below and will be recorded the next time we get a spare moment provided Alistair is up to the task.