Review: ‘The Husbands of River Song’

I’ve thought for a while now that River Song is a little like Marmite. You either want to absorb her entirely, lusciously spread on toast, or burn her alive. You love or hate her and there is comparatively little middle ground.

While taste is always subjective, it’s a thing that doesn’t happen often. Few fans would argue, for example, against general conviction that Melanie Bush is an irritating carrot-obsessed fitness freak, at least on TV (Big Finish tells a different story, of course), or that Adric was a general twerp. On the other hand most people love Ian and Barbara. Still, River’s apparently ubiquitous presence in the seven years we’ve known her – and particularly in the last five – has generated as many detractors as it has fans, which is presumably why last night’s Christmas special, ‘The Husbands of River Song’, while actually being quite good, presumably had a good number of people pulling their paper cracker hats down in front of their eyes even before the opening credits. There is no middle ground with River, just as there is no middle ground with processed yeast extract. You either eat it by the jarful or you involuntarily gag as soon as it swims into view. 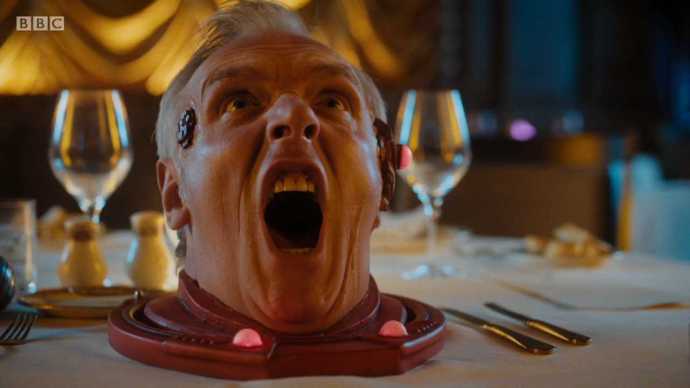 But upon reflection, I don’t think it’s that simple. I think it’s possible to have your toast and eat it too. I’d had more than enough of River by the time we’d wrapped up ‘The Angels Take Manhattan’, but getting her out again for ‘Husbands’ seems to have paid off. The plot – such as it is – revolves around an attempt to rob the despotic, disembodied King Hydroflax, who happens to be carrying a priceless diamond in his brain. It’s the excuse for the ridiculous sight gag of a head in a bag – almost as ridiculous as River’s sonic trowel (although it is a nice plant, if you’ll excuse the pun, for the inevitability of the Doctor’s Christmas gift). The honour of playing the head of Hydroflax goes to Greg Davies, who is almost as uptight as he was in Cuckoo, and just as much fun to watch.

Essentially ‘Husbands’ is exactly the sort of romp that you need after a heavy series; the sort of story that ‘Last Christmas’ really ought to have been, and wasn’t. Neatly compartmentalised into three locations, with differing moods in each, it calls upon Moffat’s stock trade of sinister, nondescript monsters (this particular one has a head that unzips), pathos-drenched love scenes and general wibbly wobbliness. There is a crashing starship. River and the Doctor have dinner (twice) and argue over who gets to drive. It’s like one of those middle-aged romcoms that are vehicles for Robert De Niro or Barbra Streisand. It shouldn’t work, but it does.

The central conceit is that of poor communication – something (to paraphrase Verne the turtle in Over The Hedge) that families do very well, and perhaps rendering this more appropriate for Christmas than it would be at any other time of the year. River doesn’t recognise the Doctor simply because she’s never met this version, and the Doctor’s irregular attempts at telling her the truth are met by interrupting sidekicks, sudden explosions or knocks on the door of the TARDIS. There’s a kind of arrogance to her assumption that there would be no loophole to the Doctor’s twelve-regeneration limit, but the real problem River faces in ‘Husbands’ is that she stopped buying breakfast cereal in 2013, and the free ‘collect all twelve’ fact cards that she’s been accumulating are from an older set that’s now two years out of date. Or perhaps it’s headcanon in action: there are, I’m sure, various Who fans who gave up on the show after ‘The Time of the Doctor’ (or significantly before that) because they couldn’t accept the idea of new regeneration cycles. Why can’t River be one of those?

Moffat teases this out for as long as he possibly can, largely to milk its dramatic / comedic potential to saturation point. This is equivalent to a disguised Shakespearian protagonist wandering about the stage in a dodgy false beard observing the outrageous behaviour of allies or enemies: the jokes come thick and fast (even if they don’t always work) and the dramatic irony goes up to eleven. The Doctor visibly blanches as he reflects on River’s apparent bigamy, callous disregard for life and financial ruthlessness (all qualities we already knew she had, so the bigger mystery is surely why he’s so surprised?). Twenty minutes in, the Doctor has to pretend he’s seeing the inside of the TARDIS for the very first time, which gives Capaldi the opportunity to ham it up like a loon. “OH MY GOD!” he shouts. “MY ENTIRE UNDERSTANDING OF PHYSICAL SPACE HAS BEEN TRANSFORMED! THREE-DIMENSIONAL EUCLIDEAN GEOMETRY HAS BEEN TORN UP, THROWN IN THE AIR AND SNOGGED TO DEATH!”

Such big speeches work well when they’re played for laughs, but like many of River’s other episodes, ‘Husbands’ suffers when it’s trying to be too serious. The story has its share of misfires, but the monologue that precedes River’s realisation that the Doctor is standing right next to her is simply embarrassing. I’ve never really bothered to find out whether Kingston can’t do dramatic speeches, or whether she simply can’t do dramatic speeches while playing this character, but either way it’s a low point. As low points go it’s not quite up there with the one at the end of ‘Wedding’, but it’s a top three.

Things are a little less clunky – although only just – come the end of the story, and it’s here that we realise that ‘Husbands’ is essentially a fifty minute build-up to get the Doctor and River to the Singing Towers. It’s Moffat finally writing the story he alluded to in ‘Forest of the Dead’, his own procrastination, perhaps, finding its way into the script when Kingston mentions that when it comes to the Doctor taking her to dinner, “You always cancel”. Or perhaps procrastination had nothing to do with it, and perhaps Moffat had always planned it this way. We’ll probably never know. Nonetheless, chronologically this is their last encounter before the Library, although the fact that a night on Darillium is twenty-four years long does rather sweeten the deal.

Indeed, the assumption here is that River will be back, either on Dirillium (which must have a Wyrmm’s nest somewhere, or at the very least a cave system containing frozen Ice Warriors). If Moffat had a theme song, it would be ‘Never Can Say Goodbye’ (or, if you like, ‘It’s My Plotting And You’ll Cry If I Want You To’). Or, as Gareth puts it, “If this ‘last night’ is 24 years long, I assume that there’s no need for it to be their final meeting or final night together. As they can go off and meet lots and get back still during the same night.”

But given the manner in which it concludes, this is a story that couldn’t have happened before ‘Hell Bent’, and the lesson the Doctor learned about going too far resonates throughout his final speech. For all Kingston’s blustering about finding a way out, it’s a touching scene, expertly lit, the romance bubbling beneath the surface while being kept at bay by some pleasant, almost understated performances – particularly from Capaldi, who is always at his best when he’s turning it down. It helps that the two leads have a chemistry that Kingston never managed with Smith – perhaps it’s an age thing, but this feels far more natural than it ever did when the Doctor wore tweed. These are two people who give the appearance of being in their twilight years (the fact that the Doctor is clearly not is, for the moment, irrelevant) and this lends their love scenes a sensibility that grounds them even in the more overwrought moments. On balance, it works. ‘The Husbands of River Song’ lacks the accessibility of ‘The Doctor, The Widow and the Wardrobe’ and the narrative oomph of ‘Voyage of the Damned’, but it substitutes an emotional core that winds up – just for a change – being far more than the sum of its parts. Of all the available Doctors that could have taken River to the Singing Towers, I’m glad it turned out to be this one. 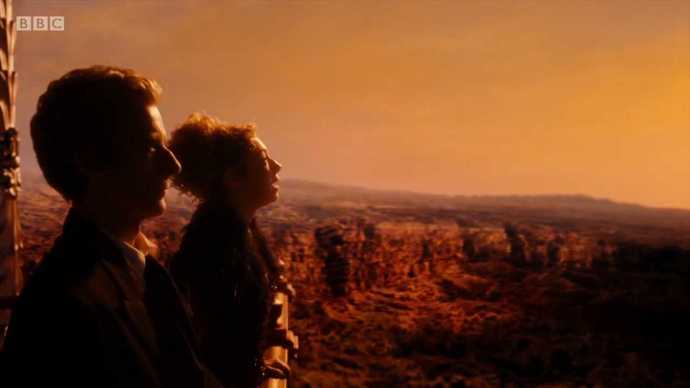 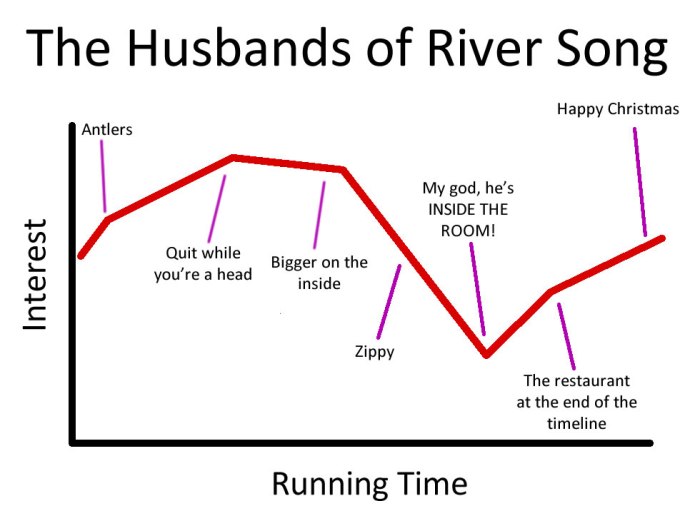 6 thoughts on “Review: ‘The Husbands of River Song’”