There’s this bit towards the end of the first Bottom live show where Rik Mayall is about to commit suicide. Adrian Edmondson has wired up a makeshift electric chair. He pulls the lever: there is a colossal build-up, a wheezing and whining of unseen machinery, alarms, flashing lights. And then there is a fart, and the bang of a cheap firecracker, accompanied by a microscopic shower of sparks.

“Yes,” says Mayall, sighing. “Sort of a bit like having it off with Bonnie Langford, this really, isn’t it?”

It says something about the state of Doctor Who when your verdict of a series finale is “Not as dreadful as some of the others”. Might we say that we’ve sat through worse? Well, yes. ‘The Wedding of River Song’ was a low point, until we reached ‘Death In Heaven’, which had me throwing my Tenth Doctor action figure at the cat. The site of a resurrected Brigadier saluting at the Doctor across a graveyard seemed to vomit on the legacy of Nicholas Courtney and the Doctor who worked for him at UNIT, and those of you who were reading this will remember that I got very cross.

There’s none of that this time. None of the grandiose, universe-shattering finales to which we’ve become accustomed. Oh, there’s a story about a prophecy that comes to nothing (more on that later). There are threats and recriminations and things that will probably come back to haunt the Doctor later, and a heap of unanswered questions (just where exactly is Gallifrey these days, given that they’ve moved it?) As a finale, it was empty and not terribly satisfying, but it could have been worse. With notable exceptions, that seems to be the best I can say for Doctor Who these days, which is something of a shame, but there it is.

To give credit where it’s due, ‘Hell Bent’ starts brilliantly. After a suitably enigmatic opening in a Nevada diner that – as is now customary with Moffat – will eventually subvert all our expectations, we move to Gallifrey, and a glorious, eight minute sequence in which the Doctor utters not a single word. It contains some of the best acting from Capaldi since he first complained about his kidneys, with the Doctor saying more with the simple act of picking up a spoon or dropping his confession dial in the dust than he could with the sort of monologue he got at the end of ‘The Zygon Inversion’, as good as that was.

Even after the Doctor starts talking, and the plot unfolds and the logic machine breaks beyond repair in a shower of cheap sparks, the acting remains impeccable – particularly from Donald Sumpter, who excels as the Time Lord President, a figure finally and unambiguously revealed to be the resurrected Rassilon. Sumpter plays Rassilon like a battle-hardened East End kingpin in a low-budget, independent gangster flick (something that Clara deliberately points out), chewing up the scenery and stealing every scene that he’s in. It’s a mesmerising performance, and it’s a great shame that there isn’t more of it.

Instead we get a lot of back and forth about prophecy as the narrative twists in all sorts of directions. The Hybrid is the Doctor! No, that was an obvious joke and it’s Maisie Williams! No, it’s the Doctor! No, it’s the Doctor and Clara! It’s Missy! It’s Keyser Soze! Actually, it doesn’t matter because we’re going to leave this unsolved until Capaldi’s final episode! That’s a writer’s prerogative, but everything about ‘Hell Bent’ smacks of something that hasn’t been thought through. It’s like buying a washing machine when you live in a third floor flat with no lifts. It’s the same problem that dogs The Deathly Hallows, in which Harry, having spent most of book six looking for a set of objects, decides in book seven that there’s another set of objects he ought to be looking for instead. Similarly, the question of the Hybrid is teased throughout and then conveniently confined to the sidelines, another ball the Moff’s thrown in the air, teasing out his reign for as long as possible until all these questions are answered. He did precisely the same thing during Smith’s run, and I think most of us are wise to it by now.

This is, of course, an episode all about Clara, and having spent last week keeping her out of shot, Moffat places her firmly back into the limelight come the story’s second act. While I don’t dispute the unavoidably autobiographical nature of writing it seems ridiculous that Capaldi’s Doctor has become, to all intents and purposes, an extension of Moffat himself. He clearly can’t bring himself to kill Clara permanently, so the Doctor finds a way to save her. Perhaps I’m being churlish, but it says a lot about the way Doctor Who is written these days that the Doctor is prepared to move heaven and earth and break every law of time to save people he likes. You get the feeling that if ‘Doomsday’ had been a 2015 episode instead of a 2006 one, Rose’s separation from the Doctor would have been at the end of episode eleven and he’d have found a way to pop into the parallel universe to retrieve her almost immediately.

I didn’t like ‘Face The Raven’. That’s no secret. But if nothing else, it did at least kill off a character in one fell swoop, even if it took longer than it should have done. The act of undoing that – simply because there’s a loophole – basically cheapens death. I have talked about this before and am reluctant to retread old ground because no one is listening anyway, but to see the writers take us this far and then pull a Davies (I think that’s what we call it now, isn’t it?) is seriously lame. If Doctor Who were action movies, we’d be in Taken 3 territory: losing your daughter once is unfortunate, two is frankly careless and three is just taking the piss.

On the other hand, ‘Hell Bent’ is crammed absolutely full of Things To Annoy The Fanboys; the sort of thing that sparks ferocious debate and keeps Twitter chugging over over Christmas until the turkey (no, I don’t mean ‘Before The Flood’) is a distant memory. The Doctor’s much-disputed half-human origins are teased. The head of security regenerates onscreen from a middle-aged white man into a younger black woman, ticking two equality boxes in one fell swoop. And it’s revealed that the Doctor left Gallifrey because he was told a scary story when he was a kid. There’s a bit more to it than that, but it’s the Whovian equivalent of Kevin from Home Alone coming face to face with the old man who carries the shovel, running out of the 7-11 and jumping on a bus bound for Nevada. Simultaneously, this isn’t Moffat re-establishing the canon, this is Moffat deliberately toying with us, and I’m not rising to the bait.

Something else I’m still scratching my head about: we were told, through a variety of press releases, that we were going to be left “a tiny bit devastated”, and after watching an episode in which the Doctor sort-of-but-not-quite loses bits of his memory, takes over Gallifrey and regains his means of transportation, while a not-quite dead companion gets to wander the universe in a stolen TARDIS with an immortal eighteen-year-old…after all this, I’m still trying to work out where exactly I’m supposed to be devastated. Is it the memory loss, which counted for nothing the moment the Doctor saw Clara’s picture on the side of the TARDIS? Is it the fact that Clara is still destined to die on that trap street, presumably after a long and happy life of zooming around the galaxy in a floating restaurant? Is it the moment when the Doctor walks into his darkened TARDIS alone, just before he goes to spend Christmas with Alex Kingston and pick up another soap actress?

I mean, I’m always a tiny bit devastated at the end of ‘Earthshock’. Or ‘Resurrection of the Daleks’. Or Attack of the Cybermen’. Actually, most of Eric Saward’s stuff would do. There was a man who loved killing off supporting characters. I’m not saying I wanted the corpses piling up the way they do in ‘Warriors of the Deep’. I don’t even mind the fact that there wasn’t a single death this episode; it’s kind of par for the course when you’re doing a story about a species with a marvellous talent for self-healing, accompanied by a woman who is functionally immortal and another who was already dead. I’d just like to point out that for all the spiel about getting upset, the body count for this week is actually minus one. 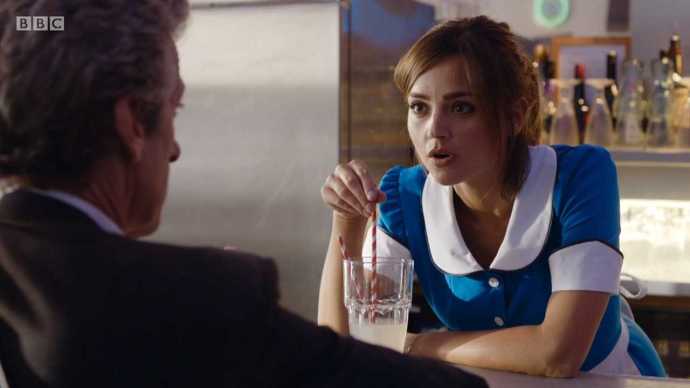 But there are elements of goodness. Gallifrey is pleasantly minimal, considering that in a decade of New Who we’ve never actually been there properly; it feels like a throwback to ‘The Five Doctors’. The retro TARDIS interior in which the final third of the episode takes place is a crowd pleaser; likewise the shattered corridor in which the end of the universe takes place is nicely realised. Even Maisie Williams throws in something that might almost be called a decent performance this week, which is a refreshing change after two hours of sulking.

Still, it’s not quite enough to save the story from mediocrity, largely because the story itself isn’t particularly interesting. The structure is as uneven as a toddler’s brick tower; it’s as if Moffat decided at the last minute to postpone his grand plan for another year and had nothing else to go in its place. I can’t say that I hated this episode as much as I did last year’s finale, or even ‘The Woman Who Lived’, but there must be, somewhere, the sort of finale that neatly straddles the road between Everything Happening, and Nothing Happening. If it sounds like I’m one of those impossible-to-please fans, I’d just point out that the crucial, series-defining moment in ‘Hell Bent’ is two characters debating whether or not they should press down on a piece of plastic. Honestly, it doesn’t get much more Bonnie Langford than that.