There’s an old joke. A married couple are sitting by the fireside one evening – perhaps she’s reading, perhaps he’s sewing, just for the sake of gender equality. She looks up from the Times and says to her husband “Would you come and rescue me in distress?”

“Of course,” he replies. “Wouldn’t make any difference what you were wearing.”

There is a dress in this week’s list of VERY IMPORTANT THINGS. I sometimes wonder whether my lists of VERY IMPORTANT THINGS are getting closer and closer to the mark. Perhaps this sort of guesswork is all a matter of practice, the sort of thing you have to spend ten thousand hours mastering (thus far, I’ve managed about fifty-six). Or perhaps it’s that if you make enough wild stabs you’re bound to hit the correct answer sooner or later.

Let’s have a look at the dress. 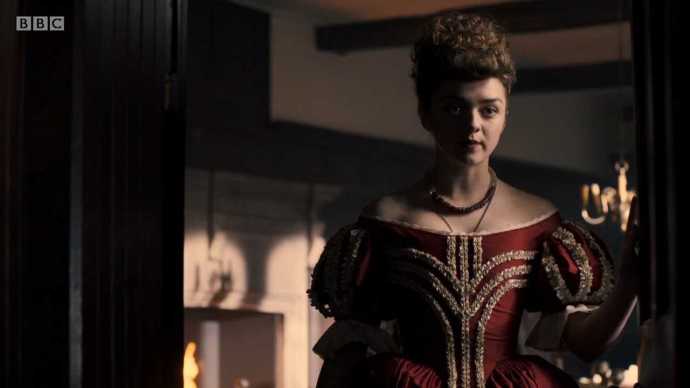 Regular readers of this blog might be aware that I spend my August bank holidays at Greenbelt festival – a fine event, although it has meant that I’ve missed several series openers over the last few years. Greenbelt is an intoxicating mix of art, literature, worship and music – it’s a feast for the eyes and ears and every year is different, but if you’re a regular attendee the sculptures dotted around site tend to burn their way into your brain after a while. Take this.

Greenbelt has, for the last two years, taken place at Boughton House, Northamptonshire, visible in the top right corner of the map below – with its previous venue, Cheltenham Racecourse, visible bottom left.

Sandwiched between the two is Banbury, famous for cakes, and this:

Ride a cock-horse to Banbury Cross,
To see a fine lady upon a white horse;
Rings on her fingers and bells on her toes,
And she shall have music wherever she goes

Let’s deconstruct this. The Doctor rides a horse in this story, so we needn’t dwell on that. ‘Rings on her fingers and bells on her toes’ refers unambiguously to ‘The Gunfighters’, a promising story marred by the omnipresent ‘Ballad of the Last Chance Saloon’, which bookends EVERY. SINGLE. SCENE. Curiously the ballad was sung by Lynda Baron, who also appears in ‘Enlightenment’, dressed as a FINE LADY who happens to be a pirate captain.

A cock-horse is a children’s toy. Those of you who recall ‘Closing Time’ will recall the Doctor’s job in the toy department of a big shop, working undercover in order to investigate mysterious electrical activity – a shop that featured Lynda Baron among its staff. From this we can draw the UNAMBIGUOUS CONCLUSION that this is all connected somehow with Peter Purves. There is no other possible explanation.

And music? Wherever she goes? What do you hear in the TARDIS whenever history is altered / the universe is about to explode / the Doctor’s left the iron on? Yes, that same ominous bell. But there’s more! Because there’s an alternative verse:

Ride a cock-horse to Banbury Cross,
To buy little Johnny a galloping horse;
It trots behind and it ambles before,
And Johnny shall ride till he can ride no more

‘Johnny’ is undoubtedly connected with John Smith, the well-worn pseudonym adopted by the Doctor, particularly during his time with UNIT. But it’s the words ‘Trots behind and ambles before’ I want to examine, referring as they do to the notion of being from the future and the past simultaneously. In other words –

Let’s move on from dresses, and look at the crystal pendant thing the Doctor and Ashildr recovered from Lucie Fanshawe’s house. 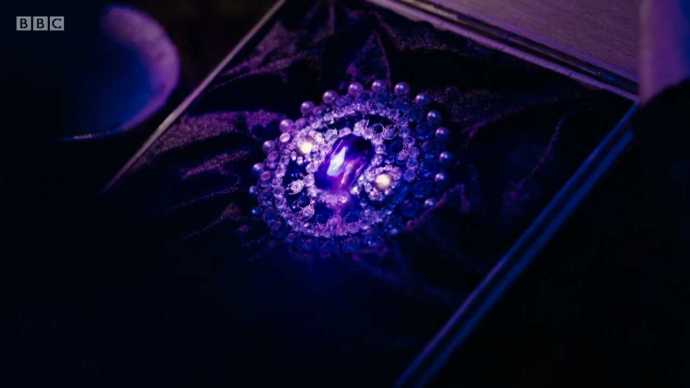 There are twenty-four studs decorating the outer edge. Thirty-four sit round the next layer, and eighteen surround the jewel. This refers to the following stories in the sequence:

Conclusion? This is a ploy by the BBC to point us towards the missing episodes they’ve secretly found but DON’T WANT US TO KNOW ABOUT YET. Further proof of this may be found when we examine the Chumblies, the friendly robots encountered in Galaxy 4, which are layered in four tiers in an eerily similar fashion. 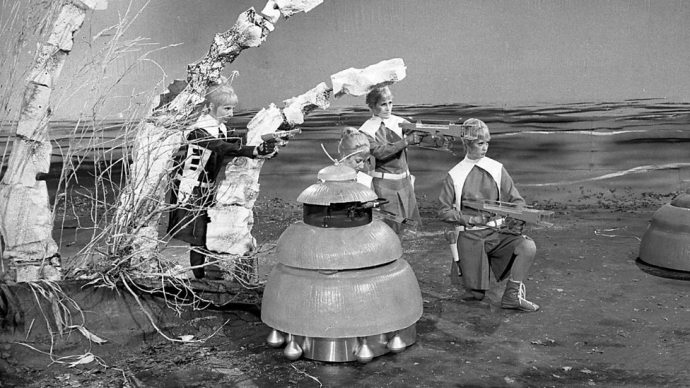 Moving on: when Sam Swift is led to the gallows we get a fairly good (if brief) glance at the wanted posters that are stuck to the wall in Tyburn.

It’s a little blurry, but about the best I could do, and it’s enough to see (just about) that the posters on the left are concerned with ‘HEAVEN’S SPEEDIE’. To clear things up, this is a reference to Missy. But it’s also a reference to Heaven’s Speedie Hue and Cry, a seminal pamphlet produced by Henry Goodcole in the seventeenth century that expanded upon the traditional method of writing about murderers and criminals to place them within a greater sociological context. (Look it up; it’s quite interesting.)

Now, we could talk about the fact that Henry Goodcole is an anagram of ‘Hoed Necrology’, itself an apt description of ‘Death in Heaven’. Or we could talk about Hue and Cry, a reference to the Scottish pop duo most famous for ‘Labour of Love’, which is a CLEAR AND UNAMBIGUOUS reference to ‘Blink’, most notably its “Look to your left” catchphrase. If you think I’m being silly about this, take a look here and here. It’s the third time this series.

Let’s ignore the large book on the stand next to the fireplace which is OBVIOUSLY A History of the Time War, and look instead at the other detail. There are five scrolls on the left-hand side of the desk (as we see it), referring to the five Doctors (including John Hurt) that we’ve seen since 2005, and a further eight on the right. Moreover, there are eight bookshelves, each containing twelve books – a clear indication that Ashildr designed her library to foreshadow the second coming of the Twelfth Doctor.

Of the books Ashildr has in this shot, seventeen are invisible or partially obscured. A further nine (over on the left) are partially hidden in shadow, although just about visible. Twenty-six books. Twenty-six missing stories. This couldn’t be more obvious if you stuck a great big sign on top of the shelves saying “THIS IS WHY THE PAGES WERE RIPPED OUT; MAISIE WILLIAMS WAS AT ST BARTHOLOMEW’S, WITH PETER PURVES”.

By the way, the hook shape in the fireplace isn’t just there for decoration; it’s an indication that they’ve already cast the next Doctor, or are at least thinking about it. Ladies and gentlemen, I give you Colin O’Donoghue.