Review: ‘Under the Lake’ 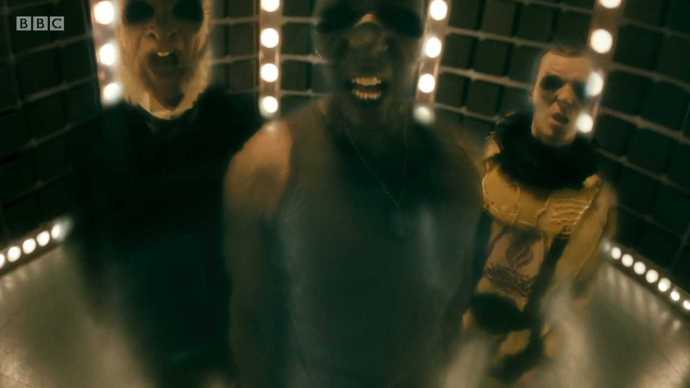 Toby Whithouse’s output for Doctor Who has been wildly inconsistent over the years. On the one hand he wrote one of the best episodes since 2005 (‘The God Complex’) – on the other hand he followed it the next year with one of the worst (‘A Town Called Mercy’). After something of a sabbatical, ‘Under The Lake’ is his first Who story under Capaldi’s run in the TARDIS. And to my pleasant surprise, it turned out to be a corker.

The base-under-siege thing is a concept that is almost as old as Doctor Who itself, arguably seeing its zenith in the late sixties (when I asked Gareth for his favourites, the reply was “Troughton, lots of Troughton and then some more Troughton”). Some are better than others: ‘The Ice Warriors’ is a fine example of how to do it well, while ‘Warriors of the Deep’ is a fine example of how to do it badly (although it does feature both halves of a pantomime horse). Either way, the concept is very simple: a self-contained installation (the more claustrophobic the better) under threat from intruders, with the Doctor and companion(s) thrust into the middle.

This instantly creates a problem: why doesn’t the Doctor just bundle everyone into the TARDIS, get them away from the ship and then blow it up? Typically such a narrative hump is resolved by taking the TARDIS out of the loop for a while, or by inserting a McGuffin for the intruders to exploit, rendering the base’s contents invaluable. In the case of ‘Under The Lake’, the ‘ghosts’ only want to kill people: as it turns out there is a good reason for this, and it is left to the Doctor to not only figure this out but actively try and communicate with them.

It doesn’t start well, at least not for Clara. “I want a new adventure!” she vigorously insists, as she skips out of the battered old police box, strolling casually up the Drum’s corridor. “Come on, you feel the same!” Meanwhile it’s the Doctor who is uncharacteristically cautious – and with good reason, as it turns out, as the TARDIS has landed them in the middle of Scotland for no reason, which is never a good start. It’s obvious what Whithouse intends by this reversal of temperament – and to his credit he deals with it later on, in fine fashion – but for a moment it really is like watching Amy in ‘Asylum of the Daleks’, and if I remember correctly that was the point at which I started to hate her. 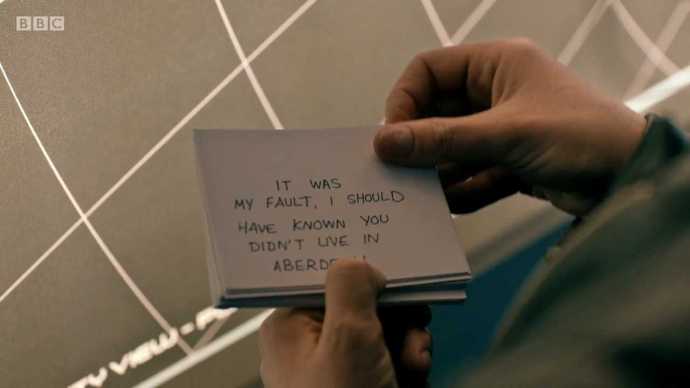 Thankfully the ghosts turn up a few seconds later and we are spared Clara’s Violet Elizabeth Bott routine (Dan Martin, but I’m stealing it) – at least for the moment. Instead, the Doctor is dumped into a command situation, the psychic paper neatly dispelling the usual “falsely accused of murder and locked up” routines that would act as filler in so many old stories. (This wasn’t always a bad thing – ‘Colony in Space’ consists of practically nothing else, and it’s wonderful – but there just doesn’t seem to be time anymore.)

Given the slightly disjointed nature of the series’ opening instalment, it’s this episode that gives us the first chance to really explore the relationship between the Doctor and Clara and how it’s developed. Whithouse does this by including a frank conversation in the TARDIS in which the Doctor implores Clara not to “go native”. “There’s a whole dimension in here,” he insists, “but there’s only room for one me”. It’s an understated and genuinely touching moment, in which Coleman acts mostly with her eyes, in the best possible sense. This occurs just a few minutes after a wonderful scene in which she and the Doctor navigate their way through a series of cue cards she’s drawn up for when he fails to respond appropriately. Clara famously described herself as the Doctor’s carer as far back as ‘Into the Dalek’, but in many ways that’s exactly what she’s become, and it works. 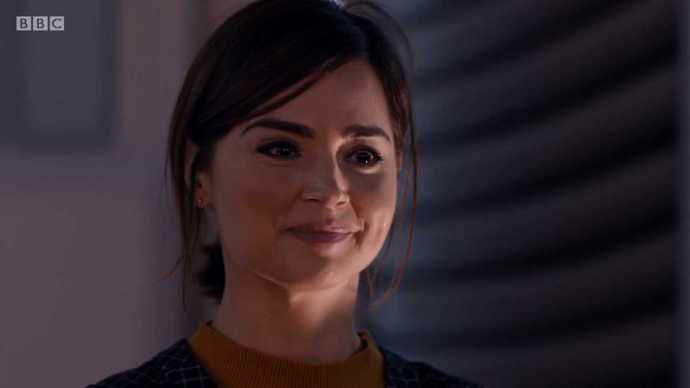 But none of this would really count for anything if the ghosts weren’t scary – and in that respect, ‘Under The Lake’ delivers in spades. Appearing as soon as the lights go out (which happens with increasing frequency once they master the base’s ambient controls) they’re as chilling as anything the series has offered up since the blanket monster in ‘Listen’ – malevolent phantasms, stalking purposely but slowly through the murky interiors of the Drum. The burned-out eyes are frightening to behold (although Pritchard’s vague resemblance to Robin is unfortunate), but it’s the constant moving mouths that are the icing on a truly frightening cake, even though the impact is lessened somewhat once this turns out to be a vital plot point.

First time Who director Daniel O’Hara’s handles things competently, allowing for a slow but steady build up and then a series of brief, but effective set pieces: the moment when Clara realises that she’s standing in the room with a dead man is predictably chilling, while Lunn’s Alien 3-inspired encounter with the deceased Pritchard is quite wonderful. Most refreshing of all is the Doctor’s conviction that these really are ghosts, even though it flies in the face of everything he’s previously encountered and believed. “There was no such thing as socks and smartphones and badgers,” he reasons, “until there suddenly were”. It echoes Tennant’s conversation with Ida in the Satan Pit way back in 2006: “That’s why I keep travelling. To be proved wrong.” 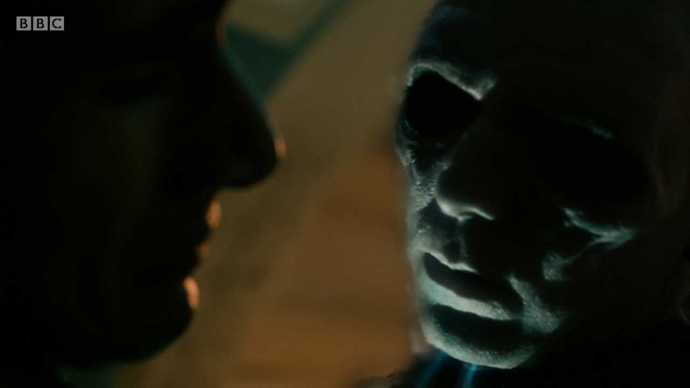 There are minor niggles. It’s not enough to have a deaf person in charge of the base: she has to have a superpower as well (in this case, lipreading). The fate of the stupidly named Richard Pritchard can be seen a mile off, and the Peter Andre joke is a misfire (although I suspect I am now one of many thousands of people anxious to see the Doctor’s clockwork squirrel). And it’s all in danger of unravelling in the final few minutes. Closing explanations are a little confusing (but once again, that’s probably because we couldn’t hear Capaldi’s muttering) and the cliffhanger undoes at least some of Whithouse’s good work: by forcing the protagonist to undergo the same fate, you’re implying that the process is somehow reversible.

But on the other hand, this seems to be where we are. If you’ve been following this blog for a while, you’ll know that the one thing I missed the most about the new series (it seems niggly to call it ‘new’ when it’s been back on our screens for a decade, but there it is) was the absence of cliffhangers. Davies is largely to blame: his assertion that audiences couldn’t commit to serial drama may have been mildly insulting to anyone who grew up with Murder: One, but on the other hand his determination to make accessible, drop-in-drop-out television was arguably instrumental in making New Who the success that it grew to be while he was in the chief writer’s chair. 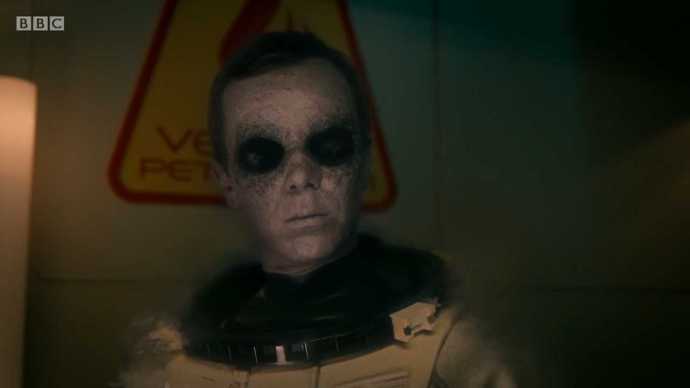 Moffat’s been a different kettle of fish from the outset – he creates television that warrants watching, re-watching, dissecting and analysing in order to pick up on the myriad little things that are apparently important (which is why I spend hours each week producing satirical posts that do just that). His shows require a commitment, for better or worse. The return to regular episodic television – of a sort – was as inevitable as Whithouse’s decision to once again kill the Doctor at the end of this week’s story. Is this about being careful what you wish for, or making the best of what you get? I truly don’t know any more. I wonder if perhaps I’ve been a little too harsh on the constant decisions to close instalments with the deaths of someone important. It renders death meaningless, and that’s a problem, but perhaps this is the way television works now. Perhaps I’m not the intended audience. 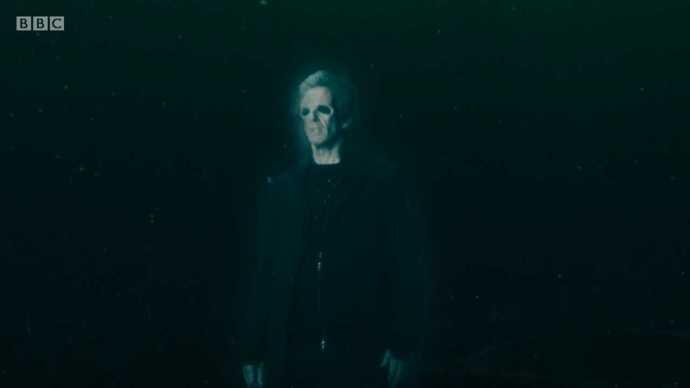 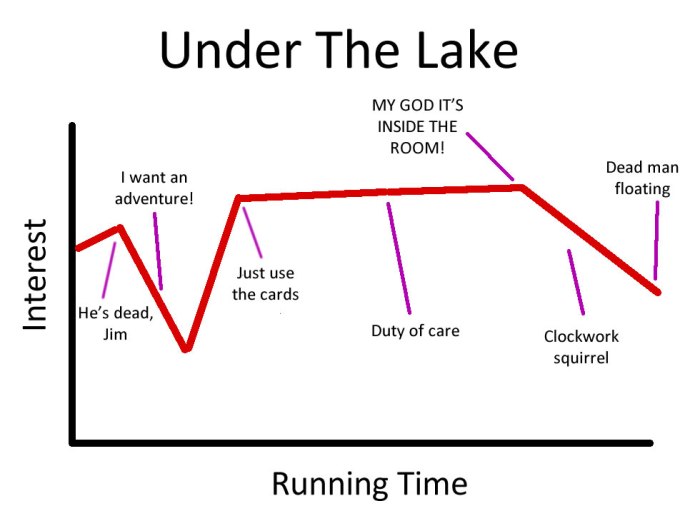 2 thoughts on “Review: ‘Under the Lake’”