Unless you’ve been living under a rock for the past few weeks – or, I don’t know, just not in the U.K. – then you can’t have failed to notice the return of The Clangers, Oliver Postgate’s little piece of 1960s whimsy. Postgate – who (along with longtime colleague Peter Firmin) also gave us Ivor the Engine, Noggin the Nog and Bagpuss, among others – charted the adventures of a family of small grey / pink rodent-like creatures who live on a distant planet and who speak only in whistles, although thankfully Postgate is on hand to translate. (In true Blade Runner style, his voiceover was added only reluctantly, and he always wondered how the show would have been received without it.) The Clangers are aided in their adventures by the now iconic Soup Dragon, along with the Iron Chicken – and if you were wondering, the name ‘Clangers’ derives from the sound made by the lids that cover their underground holes when they slide them off.

The show was notorious for having some quite objectionable language (at least for a children’s programme) in one of its original scripts, as Postgate explains in Seeing Things:

“I could think of only one piece of bad language. One other episodes begins with Major Clanger trying to open the big sliding doors of the main cave-mouth. It jams and his first line is:
‘Oh sod it! The bloody thing’s stuck again!’
‘That’s it,’ said Ursula [Eason]. ‘You know quite well we can’t say things like that on children’s programmes.’
‘But…’ I said, ‘they don’t say it. They whistle it.’
‘But surely people will know?’
‘If they have nice minds they will hear him say “Oh dear me. The naughty thing is jammed again.”‘
‘Oh, all right then, I suppose so, but please keep the language moderate.'”

And, of course, when they released the ‘talking’ Clanger toy a few years ago, the phrase it emitted when its tummy was squeezed was…

Well, you can guess.]

Anyway, I was thinking about all this when a couple of Doctor Who-themed mashups came to mind. Curiously (or perhaps not) they were both from ‘Kill The Moon’: 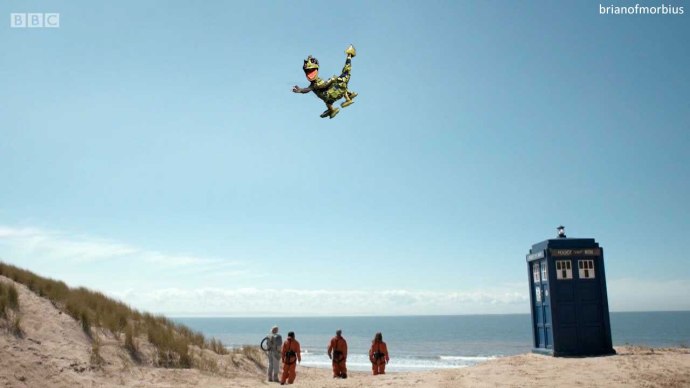 I’ve said before that I probably watch more CBeebies than is healthy, and I definitely watch more Doctor Who than is healthy, and when that happens you start seeing the two of them together with alarming regularity. Edward is a big fan of Let’s Play, which I rather poorly described to Gareth as “Mr Benn, but with better sets” (“Mr Benn had great sets!”). The premise is that CBeebies veteran Sidney Sloane and relative newcomer Rebecca Keatley have some kind of house share thing going on: in each episode they take it in turns to put on a different costume and travel through a mystic portal into another world, in which they have an adventure as a chef or a builder or a clown, interacting with a bunch of archetypes, all of whom are played by whoever it is that has stayed in the house. It is great fun, even if some of the geekier characters played by Sloane are awfully like Whizz Kid.

Anyway, the other day Sid was on an alien planet dressed as an astronaut, and I started making connections between the alien he’d encountered and some of the creatures from ‘The Web Planet’, even though they look nothing alike: 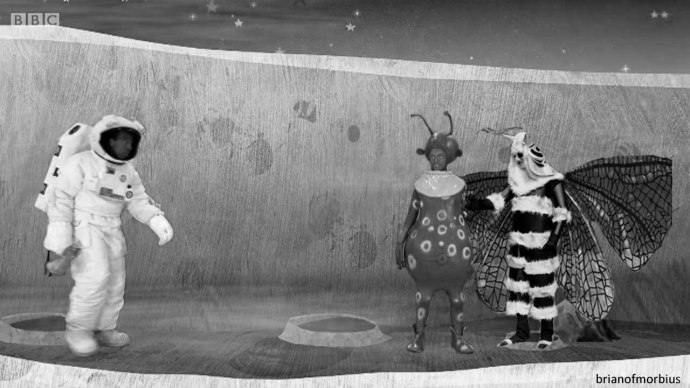 (I can more or less guarantee that a couple of hours after I post this, Gareth will email me and say “She looks like a ___”.)

Sid is accompanied on his travels by a robot dog, which (despite some variation at the base) looked awfully familiar. I don’t mind, of course. There are only so many ways you can do a robot dog – literally, as it turns out:

No, you really didn’t see this. Keep scrolling.

Meanwhile, in the Best Cafe In The World (TM), Big Cook Ben and Little Cook Small find themselves in a scene from an unwritten Big Finish ‘Planet of Giants’ spinoff.

And completely unrelated to Who, the Twirlywoo submarine is invaded by Tribbles.

I think I need coffee.