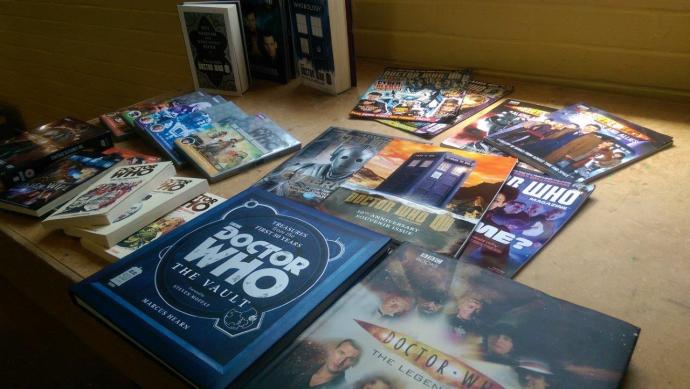 It’s a hot Thursday afternoon. The lawn needs mowing. The kitchen needs cleaning. The laundry needs folding, and that novel still isn’t finished. And where are you, James? You’re in a church hall, talking about the history of Doctor Who.

A while back I was asked to host a singalong session over at the church for the group that meets there every week. It’s a group for advancing years, so I gave them a couple of music hall standards, a few from the Great War, and Max Bygraves’ ‘Gilly, Gilly, Ossenfeffer, Katzenellen Bogen by the Sea’, among others. They all sang with good cheer and everyone had fun. The following morning I was in the high street when I bumped into one of the elderly ladies I’d seen at the event. She asked me if I was still in good voice. I said I was. After she’d gone I reflected that this is probably the closest I’ll ever get to a screaming teenage girl throwing me her underwear.

It was Emily who suggested that I offer to do a talk about Doctor Who. “It can’t be any worse than some of the stuff they must get,” she said, in what I only realised later was something of a backhanded compliment. As to the stuff they get, I wouldn’t know. There are all sorts of stereotypical assumptions made about this sort of thing, mostly enforced by Jam and Jerusalem (I really wanted a video of that presentation – with slides – about life in Kwik Save, but BBC Worldwide have blocked it).

But there’s an old saying about writing about what you know, and it’s the sort of thing I could imagine being fun to put together, so I suggested it to the group’s leader and they booked me in for June. And it was only then that I panicked. Because how on earth do you give an overview of Doctor Who in three quarters of an hour?

Avoiding too much history is a part of it. I could recite dates and actors until I’m blue in the face and Eccleston has agreed, at last, to do a cameo, and we’d still be there. The trick is making these things fun. So there was video, and lots of it. There were also Daleks and Sontarans and the Empty Child, because half of these people grew up in the war and the idea of a lonely boy walking around a Blitz-stricken London asking for his mother is one they could probably relate to, even if the boy turns out to be a toxic, highly infectious zombie. I included Weeping Angels, but avoided anything gratuitously horrid (so ‘Seeds of Doom’ stayed in the reject pile, at least this time). And I drew the line at the Silence: not because I didn’t want to terrify people, simply because they’re crap.

Besides, it had been a while since the figures had had an airing, and I have new ones.

In the end it all went off splendidly. You have to strike a balance between confusing people with excessive production history and teaching them to suck eggs. I concentrated on the stuff I knew would relate – the Coronation Street ratings war, the Kennedy assassination thing and the fact that ‘The Android Invasion’ was filmed just up the road. There were lots of Daleks, but I neglected mention Raymond Cusick. On the other hand I didn’t mention Terry Nation either, so it’s all good.

As a courtesy (and simply because I was quite pleased with it) I’ll be sharing the raw text, along with images and embedded videos. But that’ll wait until next time (and, depending on space and a desire to avoid the increasingly common TL:DR scenario, in all likelihood the time after that). In the meantime, would you like a jelly baby?