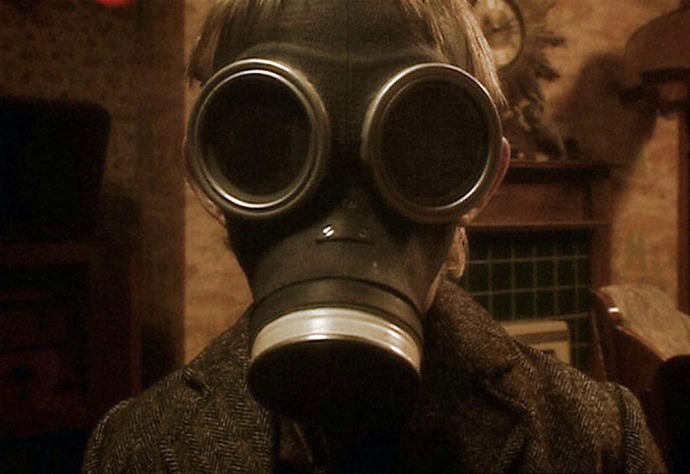 You’re doing it now, aren’t you? You’re tilting your head slightly and softly murmuring “Muuummmyyyy….” in that child’s sing-song voice, dropping the second syllable by a major third so that it sounds a bit like a door chime. You’re thinking about that bit with the telephone. You’re thinking about the gas mask growing out of Richard Wilson’s face. And somewhere, in the back of your head, there’s a memory of the Doctor doing something that looks mildly like interpretive dance.

It helps to look at things in context, and in that context, ‘Dalek’ is the Ninth Doctor’s Emperor’s Throne Room moment. It is the point in the story in which the protagonist comes dangerously close to losing the plot. The Doctor is not only brandishing that gun at the evolving Dalek; he’s dangerously close to firing it. After the story concludes, his anger seems to evaporate somewhat, and what we see in the second half of the series is a lighter, cheerier Doctor more at ease with his place in the universe. In terms of tone, this two-part tale is the zenith of that ascent, and almost inexplicably it’s all down to the bananas.

This is Moffat’s first stab at a New Who narrative and it’s arguably his best, which is unusual seeing that its structure is so uneven. Oh, I don’t mean that it doesn’t hang together; it does. But tonally, the Gas Mask Zombies story (as we shall probably not refer to it) is very much a game of two halves. Linking them is a suave intergalactic omnisexual conman who would swiftly become a gay icon and a Saturday evening staple, at least on the BBC. In years to come, Jack would spend an awful lot of time hanging around on rooftops (is this where 51st century swingers go cruising?) and deal with the ramifications of immortality, and it’s strange to see him looking so young and fresh and carefree. ‘The Empty Child’ is the one story where Jack’s morality is up for grabs, and that’s what makes his eventual development of a conscience so ultimately satisfying, even if his passion for gunplay never really diminishes.

But if ‘The Eleventh Hour’ (as discussed yesterday) disappoints in terms of its monster, this story serves up a creation so devilishly creepy it’s almost iconic. The mask-fused child is the stuff of nightmares, staring out through soulless eyes, forever repeating the same dialogue in that melancholy deadpan. It’s like watching Orlando Bloom. Most of the horror occurs within ‘The Empty Child’, with ringing phones and open doors. When Dr. Constantine gives his clinical assessment, the story kicks up a notch and delivers a moment that will, in twenty years’ time, be showcased on a documentary called ‘Was early 21st century Doctor Who too frightening?’.

Dr. Constantine is to ‘The Empty Child’ as Severus Snape is to The Deathly Hallows: his role is brief but significant, narrative focus lingering on him, at least to an extent, even after his conversion. This is largely down to Richard Wilson’s screen presence, lending Constantine the world-weary gravitas he needs without being bereft of humour. Moffat generously gives him the episode’s punch line when, following the denouement, an elderly patient informs him that her missing leg has grown back. “Well, there is a war on,” Constantine remarks. “Is it possible you miscounted?”

But if Constantine gets the belly laugh, there are plenty of giggles along the way. For such a sinister story, ‘The Doctor Dances’ has comedy in abundance. It starts with the Doctor’s relief that his ‘go to your room’ gambit has worked on the zombies (“Those would have been terrible last words”) and from then on the gags fly thick and fast: when the Doctor and Jack aren’t bickering over the relative merits of sonic technology (“Who looks at a screwdriver and thinks ‘Ooh, this could be a little more sonic’?”), they’re playing cowboys with bananas. The Doctor is a man who does all his best work under pressure, which is probably why the jokes don’t feel out of place. 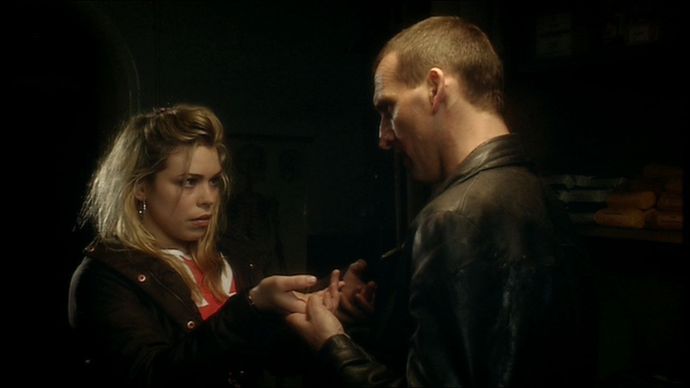 There are moments that don’t work. The Glenn Miller dance that closes the story feels forced, and the ‘magic hands’ in the closing scenes are utterly contrived – it’s hard, in a way, to accept the fact that the Doctor is literally saving the world by waving his arms. The offence is, nonetheless, instantly forgiveable, occurring as it does within a moment of pure euphoric joy. Irrespective of cliche and dated analogies about emailed upgrades, it’s impossible not to feel a lump in your throat when Eccleston punches the air in triumph, crying out “Just this once, everybody lives!”. As feelgood endings go, it’s up there with Dawn of the Dead, in which hardly anybody lives, but characters we felt sure were doomed manage, at least, to survive long enough to fight another day.

It’s typically overstated, of course, but ‘The Doctor Dances’ is that rare beast: a Doctor Who story with a body count of precisely zero – or minus one, if you want. We could throw up all sorts of theories as to whether Jamie’s revival was predetermined or whether it screws around with causality (as epitomised by the previous episode, in which we’re introduced to a monster that supposedly feasts on paradoxes but which we conveniently never see again, presumably because the CG budget prevented it). But that’s missing the point: this is a story about surviving: the darkest days of the war, and ever-decreasing odds. In the end the battle is won not by physical prowess but by simple acceptance of what we are, and our capacity to do good in spite of the mistakes we have made, and it is this that allows Nancy to reconcile with her son, and which ultimately calms the Doctor, paving the way towards Jack’s eventual redemption. Moffat’s written better-constructed stories, but few come close to capturing the spirit and sense of imagination and wonder that he managed here.

Cameron’s Episode: ‘The Girl in the Fireplace‘

Categories: New Who, Top 10 | Tags: are you my mummy, christopher eccleston, doctor who, doctor who series 1, entertainment, ninth doctor, the doctor dances, the empty child | Leave a comment