It seems funny to think that it’s been ten years since I was a young upstart working in academic publishing, making the most of the office broadband connection in order to read BBC articles about the upcoming revival of Doctor Who. It was early spring 2005, and everyone was fairly excited. We’d seen trailers showing animated shop dummies, ghosts and a spaceship crashing into Big Ben (well, the clock tower that contains it, although I’m sure they hit the bell on their way down). Farting aliens, irritating love stories and the arm-folding shouts of ‘Fantastic’ that would define at least the first series of Russell T. Davies’ reign were still a world away, and in the meantime the imminent ‘series one’ was little more than an intoxicating world of wonders waiting to be discovered.

A decade later, with four more children than I had the first time Eccleston put on the leather jacket, I’ll admit that I’m very jaded about this revived Doctor Who. Those of you who read this regularly will know that I spend a lot of time whinging about story arcs, companion-centric universes and ontological inanity – to the extent that the list that begins today will feature, you will note, absolutely nothing from the last series. It’s nothing personal. I’m a big fan of this new Doctor. Capaldi’s fiery and glacial and wonderful, embodying Hartnell and Pertwee and even bits of Colin Baker. He just doesn’t have the stories he deserves, although I live in hope that this will change.

But enough of that for now. It would be nice to spend a couple of weeks accentuating the positive. Over at Metro, where I write occasionally, the very talented Cameron McEwan is doing a top ten countdown of New Who episodes, one story a day – so it makes perfect sense to do our own here, in parallel. Well, sort of parallel. He’s writing “episodes you have to see”, which is a little different to the somewhat more subjective “best episodes”. But it may be interesting to see how our lists compare, so I will link to Cameron’s posts as we go (not that he needs the traffic). And we start with…

Let’s get one thing straight: I bloody love Donna Noble. If New Who were a recruitment consultancy staffed by giggly hormonal teenage girls (and many recruitment consultancies are), she would be the branch manager, older and wiser and more grounded. She crash-lands in the TARDIS as the most irritating sidekick since Mel – with hair to match – and then is completely transformed. She is that rare breed: a New Who companion who undergoes a character arc that doesn’t leave me fired up with loathing and irritation.

Oh, for sure it all goes to pot in those final episodes. The Doctor-Donna thing is mind-numbingly tedious, and the Dalek-crushing, super-intelligent Donna in ‘Journey’s End’ is borderline offensive (what, she couldn’t save the universe on her own; she needed the Doctor’s brains?). But her transformation prior to that convergence is wonderful, and most refreshingly of all it’s done with comparative restraint, at least for this period in the show’s history: it’s nice to have a companion in the TARDIS who genuinely doesn’t want to shag the Doctor, and while the “No, we’re not a couple” gags quickly become tiresome, just for a change, the lady doth not protest too much.

‘Pompeii’ is early Donna. It’s her baptism of fire, in an almost literal sense. She is a willing traveller and the Doctor the most reluctant of hosts (the look on Tennant’s face at the end of ‘Partners in Crime’ as Tate loads her suitcases into the TARDIS is absolutely priceless). She reacts to the site of ancient Rome (or what she and the Doctor believe to be Rome) by addressing one of the street vendors in Latin, just to see what will happen. She takes the sight of fiery volcanic monsters in her stride, crying “You fought her off with a water pistol; I bloody love you!”. And she implores the Doctor to intervene in a raging, tear-stained exchange as Pompeii burns – although her high point arguably comes a few scenes earlier, when she clasps a hand over the Doctor’s inside the escape pod, as the two of them silently make history together. (It’s a scene Moffat would visit – however unconsciously – years later, at a pivotal moment in ‘Day of the Doctor’.)

But good as she is, Tate isn’t even the best thing about this episode. That honour goes to Phil Davis, in a performance described as “scowling” by Digital Spy: Lucius is a wrathful soothsayer who starts out intense and builds to fire and brimstone of Biblical proportions. It’s possibly the most angry performance in New Who and Davis hams it up like the villains of old. Not for him the balanced, morally ambiguous Machiavellian of ‘Timelash’ or the complex morality of ‘Genesis of the Daleks’. This is Omega territory. We could be back in 1973. In a way, we very nearly are. The entire episode has an almost overblown feel to it, as if James Moran wanted to write a contemporary story in the style of the Doctor Who he knew years ago.

‘Fires of Pompeii’ is infamous, of course, for featuring an early appearance from a red-swathed Karen Gillan as well as a supporting role from a future Doctor. It gave Moffat the excuse for yet another over-arching mystery in a tedious scene in ‘Deep Breath’ (one to which I’m sure we’ll return at some point) but the episode really deserves a stronger legacy than this. ‘Fires of Pompeii’ is gratuitously ham-fisted, and is as invested in silliness as it is in the moral debate that forms the narrative thrust of the third act. But there’s a satisfying consistency that runs right through to the ending, and the Doctor’s decision to save Caecilius and his family – however inconsequential in the grand scheme of things – feels as much in character as does his initial decision to abandon them. When Tennant opens the door of his TARDIS, bathed in light, peeking through the fourth wall and beckoning both the helpless Romans and the entire audience to “come with me”, you can’t help but cheer. And that’s my general reaction to the entire episode. It’s crowd-pleasing, but sometimes that’s not a bad thing. Even with Doctor Who. 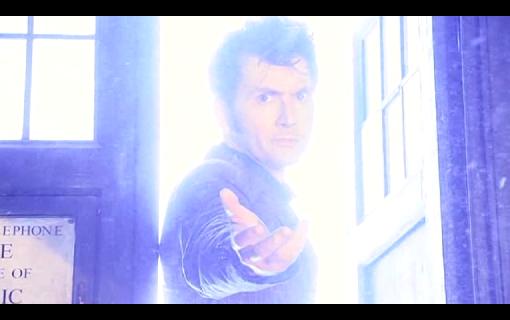