This? Our lounge, yesterday.

I’m really not a technical person. I struggle even to understand the concept of cookies. It took me half of yesterday afternoon and the entire evening to get it from looking like a dreadful mess to a slightly less dreadful mess, and it’s still not great.

But I will admit that when I’m down the back of the TV, rummaging around with cables and wires, I do feel a little bit like the Doctor. It’s partly the idea of frantically wiring and rewiring in a race against time (i.e. before the kids wake up and want to use the Xbox), covered in sweat (it was hot) and in a tattered, bloodstained shirt (Thomas had a fall in the bathroom). But the Doctor analogy goes further, because when I got everything out, there were a bunch of audio / SCART / RF leads down there that didn’t appear to be connected to anything. I can only assume that I’d used them previously and then been unable to recover them in the increasing pile of spaghetti that sat behind the entertainment centre, but with typical lack of foresight I’d failed to label anything or to sort it when I got it out, with the net result that I spent hours last night trying to work out which leads I’d used and which I hadn’t. “WHAT IS THIS?” Emily heard me shouting at least twice, in the manner of Tom Baker in ‘The Pirate Planet’. “WHAT POSSIBLE PURPOSE COULD IT HAVE? WHY DO I NOT KNOW? WHY IS THERE NOWHERE TO PLUG IT IN?!?” 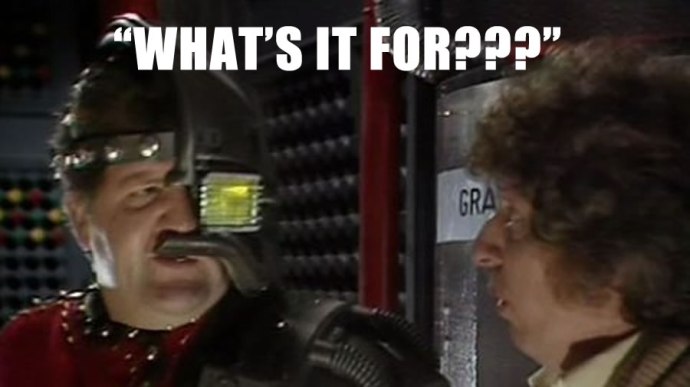 The TV now has no digital signal, but that’s not because of the surplus cables. Coincidentally I had a bizarre dream in the early hours of the morning about a fortnight ago, in which I met the Twelfth Doctor and we had to set up a projector and DVD player so we could show an REM tour film to an old friend and a bunch of her workmates. This proved to be very difficult, although we managed it after a couple of hours, during which they all had a nap. Your guess is as good as mine.

It’s typical, I suppose. “There’s a few bits and bobs left over,” says Lister when he’s repaired the damaged Kryten in ‘Terrorform’, “but it’s always the same when you try a bit of do-it-yourself, isn’t it?”

I may leave the cabling to the Doctor. Or MacGyver. Or, in the real world, my other half, who is an easy match for both.