The Nimon be praised

Ah, how do I love thee, ‘Horns of Nimon’? Let me count the ways.

For starters, this is one of the silliest stories in the canon. The premise is fairly sound: it’s Theseus and the Minotaur, half a universe adrift. It has a labyrinth, a bull-like monster and a batch of unnecessary sacrifices. Even Theseus himself makes a token appearance in the form of the partially anagrammed Seth, who has feigned nobility in order to impress girls, and has wound up being hero-worshipped by a Blue Peter presenter. Somewhat disappointingly, this is not Peter Purves.

The Doctor and Romana arrive in the TARDIS – Romana wearing a bright red coat that turns out to be something of a mistake when she’s cornered by the titular bull. There is a lot of running and shouting and some frantic mugging from Baker, who buries his head in K-9’s neck with a gasp of horror when the pair are about to crash into a planet (not long after giving him the kiss of life). It’s partly the excesses of a performer about to enter his twilight, ‘needs to be reigned in’ phase, and partly Kenny McBain’s direction, which allows for moments like this.

(“Simultaneously the best Tom Baker moment,” says YouTube user Cybjon, “and the worst. It’s like the show jumped the shark, got eaten by the shark, only for the show to eat its way out of the shark triumphant. Also, the shark has the face of Graham Crowden on acid.”)

We can’t single out Baker. Lalla Ward is also clearly having fun, whether it’s sparring with the aforementioned Crowden, sneering at the bullying co-pilot (whose role is largely to shout “WEAKLING SCUM!” at his prisoners) or leading an escape attempt by running halfway across the room, crying “GO! GO!”, and throwing her arm over her shoulder in the sort of theatrical manner that you’d expect from a stage school graduate. Indeed, the whole story is borderline pantomime in places, before crossing the border completely and acquiring a visa, and then applying for citizenship. It’s no secret that Anthony Read was less than happy with the interpretation of his script, which is relatively straight-laced until it wound up in the hands of a cast who play it mostly for its comic potential. Small wonder, then, that this story divides fans as much as it does.

But I enjoyed ‘The Horns of Nimon’ so much I watched it twice in the same day. Once by myself, with Edward to keep me company in between clambering up on the table and emptying out the cat food (this is him, you understand, rather than me) and once with Joshua and Daniel, both of whom were thoroughly gripped. We particularly enjoyed Soldeed’s final comeuppance, where the power-crazed fanatic comes to the unmistakable conclusion that he’s been duped:

Somewhere in the creative ether there is a dramatic, serious version of this scene which would make Anthony Read a happy man. I have no interest in seeing it. I confess I love this with a passion. Crowden goes through all five stages of Lear’s madness in the space of a couple of minutes. In contrast, Lalla plays it comparatively seriously, even if she delivers her lines with perhaps more resonance than is strictly necessary. It calls to mind the Doctor / Pirate Captain face-off in ‘The Pirate Planet’, in that you have a normally flippant and detached character being the serious one, because the gravity of the situation calls for it. Crowden hams it up like a loon, building his entire performance to this one moment, but somehow it fits.

There are many ways to skin a cat. But here, exclusive to this blog (because nobody else would be quite so silly) is a line-by-line breakdown with appropriate stage directions, showing how you – yes, YOU! – can reconstruct this scene, as it originally played, within the privacy of your own home / school / club / whatever. (Transcript by Chakoteya.net; annotations by me.)

[Teka has joined her friends in suspended animation.]

[Romana goes to the controls.]

SOLDEED [evangelical street preacher]: No, the Nimon will fulfil his great promise! The Nimon be praised!

ROMANA [chiding parent]: The Nimon be praised? How many Nimons have you seen today?

ROMANA [mother asking child about biscuit consumption]: How many!

ROMANA [as above]: How many Nimons?

SOLDEED [Billy Bones]: He said he was the only one. The last survivor of his race.

SOLDEED [Sylvester McCoy, eight years early]: So this is the great journey of life?

ROMANA [“Yes, this was my favourite line”]: They’re parasitic nomads who’ve been feeding off your selfishness and gullibility.

SOLDEED [Johnny the Painter]: My dreams of conquest. [Lairy drunk] You have brought this calamity upon me!

ROMANA [Angry headmistress]: You’ve brought it on yourself!

SOLDEED [Richard III]: You will die for your interference!

[Soldeed runs through to the furnace and pulls the lever.]

[Seth shoots Soldeed as the alarm starts to sound.]

SOLDEED [Private Frazer from Dad’s Army]: You fools. You are all doomed. Doomed.

[Soldeed dies with a manic laugh.]

DISCLAIMER: Please note that Brian of Morbius is by no means liable for death caused by bad exposure to over-acting, or indeed over-exposure to bad acting.

There is also this.

In any event, I was struck throughout that the story’s title is only one letter shy of ‘The Horns of Nimoy’, so – 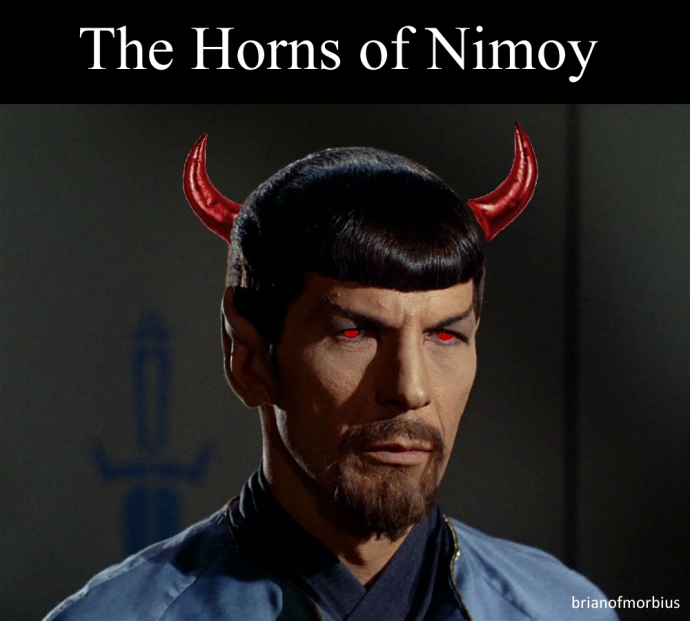 You pronounce it differently, of course. A closer homophonic parallel is ‘The Horns of Simon’, which automatically made my children think of a certain grumpy millionaire, known for his weekly pantomime theatrics.

(For years now, every time the boys want to dress up, at least one of them will do nothing more than pull their trousers up to the armpit and shout “Hey, I’m Simon Cowell!”.)

I did not produce this image. I will possibly be producing a video mashup of the Nimon making derisive remarks, using MP3s I found on the internet.

But I think that’s for another day, don’t you?

3 thoughts on “The Nimon be praised”