Why are you wearing that stupid man suit?

Yesterday I picked up my car from the garage, after they had fixed the heater. Here’s my World of the Strange moment: the dashboard clock was running six minutes fast when I took it in, but is now running three minutes slow. I therefore conclude that the car has somehow gone back in time. This would account for how they could afford to charge me for two and a half hours’ labour despite the mechanic’s insistence that “the job actually took five”. He wasn’t saving me money, he was actually ripping me off.

The Back to the Future parallels are obvious. But a similarly mundane form of time travel takes place in Donnie Darko, a film I’ve never really understood, building up over a couple of hours to the revelation that the hero has to have a plane fall on him so that he won’t be a total dickwad, and that the spectral rabbit is actually a guy in a Halloween costume. Oh, there’s probably more to it than that, but I couldn’t be bothered to find out. Mulholland Drive made more sense, and that was a David Lynch.

It’s seminal, supposedly, but it’s not one you show to the kids. I’ve even avoided showing them any pictures of the rabbit, which is frankly creepy (pun intended). You can’t wrap them in cotton wool, and a little gradual exposure to scary stuff on a bit by bit basis does no one any harm, but there are limits. I am still dealing with the fallout from Raiders of the Lost Ark, Joshua forever telling me I was an irresponsible parent for showing him the face melting scene. “Most kids,” I countered, “most normal kids, would be telling their friends that their father was really cool for letting them watch a highly unsuitable film WHICH WAS LABELLED AS PARENTAL GUIDANCE.”

This reached a head last weekend when we watched ‘Dragonfire’ – a story that features one of the most bizarre cliffhangers in the history of Doctor Who (more on that in a future installment) and a recreation of the end of Raiders, when Edward Peel’s face melts. It’s mercifully brief, but it scared the pants off me as a kid, and Joshua was hiding his face in his hands, which is more or less what I expected. It wasn’t until a few days later that it came up again.

“Daddy? I know what I want for my birthday.”
“OK…”
“You’ll like it.”
“Is it scientifically plausible?”
“Yes.”
“Does it exist beyond the blueprint stage?”
“Yes.”
“Is it legal?”
“Yes. It’s the thing that man’s using on the wall.”
“You want a wallpaper steamer? What on earth for?”
“I wondered what happened if you held it up against someone’s fa-”
“You are SO NOT HAVING ONE.”

Joshua and I may have enjoyed ‘Dragonfire’, but Edward has seen more episodes of old Doctor Who than the other three put together, despite being only a year old. His current thing is dancing to the theme music, although Edward dances to any music, even if it’s the Mavericks. Still, one might possibly say he’s over-exposed. When I’m not sorting laundry in front of ‘Enlightenment’, I’m clearing up the kitchen to the sounds of Big Finish. There will come a point, I assume, that there is a cognitive shift when he starts to actually understand what he’s looking at, and I will have to switch on Thomas the Tank Engine instead, but until that day, I’m making the most of things.

Edward and I have a self-enforced Doctor Who break every Friday when we visit the local children’s centre. Almost. What else, may I ask, are you supposed to do with glittery Play-Doh?

“I was just watching some bonus features on the ‘Greatest Show In The Galaxy’ DVD,” said you-know-who, “and saw a rather poor Victoria Wood sketch.  There’s a bad-quality version on YouTube:

“Your Play-Doh,” he concluded, “looks like the monster in the sketch!”

It’s supposed to be a Dalek, but I did it in about a minute and a half in between fishing bits of Play-Doh out of Edward’s mouth. What’s her excuse?

Dodgy-looking monsters are par for the course, of course, when you have next to nothing to invest in the manufacturing process – and when you’re viewing events some thirty or forty years after the fact. It’s very easy to laugh at the bubble wrap sleeping bag monsters in ‘The Ark In Space’, until you remember that bubble wrap was a relatively new thing in 1974, meaning your average ten-year-old wouldn’t have known what they were looking at. Or they did, and they didn’t care. “I get a bit impatient when people say ‘I loved watching Doctor Who because of the shaky sets,'” admits Colin Baker. “No you didn’t, you liar. You watched it because you believed it and you were scared.”

Sometimes a little creative thinking works wonders. The unconvincing monster about to feast upon Romana’s during the sacrifice scene in ‘The Power of Kroll’ is, of course, a man in a suit, and Robert Holmes gets round the obvious shortcomings by having the Doctor reveal him as, indeed, a man in a suit. When a slightly chagrined Romana asks him how he knew, the Doctor shrugs dismissively: “He probably looked more convincing from the front.”

At least there was a bit of variety back when Baker was romping around the universe. These days it’s always the same bloody creatures, irrespective of context. 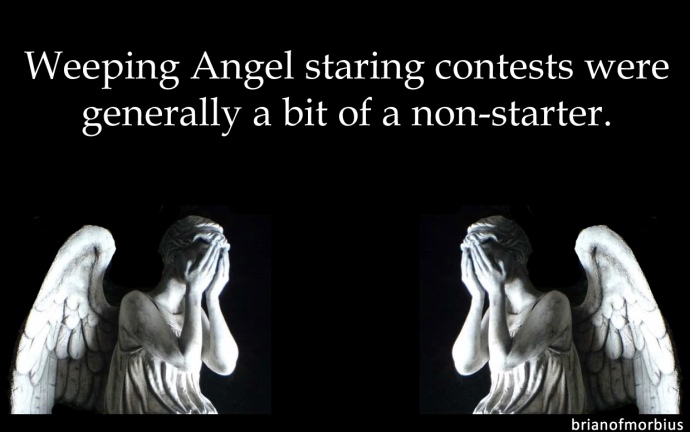 Anyway, as we returned from the children’s centre the other day we popped into the Co-op along the road, and amidst all the Creme Egg displays I discovered that Bassetts are, rather sensationally, producing Jelly Bunnies for Easter.

So, you know, obviously.

2 thoughts on “Why are you wearing that stupid man suit?”