There’s an episode of Buffy that’s always got to me. It’s called ‘Normal Again’, and within it Buffy has an encounter with the Trio and is left believing that her existence in Sunnydale as a Slayer has been a delusion experienced during a stay at the psychiatric institution in which she still resides. Within the ‘delusion’, Buffy becomes increasingly confused and Willow tries to get her to drink the antidote. Back in ‘reality’, her mother is still alive and married to her father, and a kindly doctor is trying to explain that the reason the stories have become so ridiculous lately is because the delusion is breaking down, which almost feels like an apology. The episode cuts back and forth between the two until it’s established that the institution is a hallucination, and order is restored. Or is it? Tellingly, the very last scene of the episode shows a catatonic Buffy seated in her hospital room, while the doctor examines her unresponsive pupils and admits that “We lost her”.

‘Last Christmas’ was a story about layers of reality. It established the concept of false reality painted to look real in order to entrap the viewer. Having dealt with this fairly early on, the story then throws a curve ball when the Doctor reveals (and then reveals again, and then again) that what we believe is real is actually another layer of the dream. Thus characters believe themselves to have woken from a nightmare only to find that there’s another one still going on. This is, perhaps not surprisingly, all tied up with the presence of Santa. ‘Last Christmas’ also broke the mould by becoming the first episode of New Who that I’ve actively decided not to show my children, although more on that later.

Things open on what we assume is Christmas Eve, and a scene that most of you probably watched on YouTube. Clara is awoken by a noise from outside her house and finds Santa on the rooftop, arguing with two of his elves (Misfits‘ Nathan McMullen and semi-regular Dan Starkey, bereft of the Sontaran makeup but still playing the comic relief). Before we have the opportunity to examine just why Clara was almost on the naughty list at the age of nine, the TARDIS materialises and the Doctor whisks Clara away to the Arctic, although not before asserting that “No one likes the tangerines” (which, by the way, is really not true, at least in our house).

The bulk of the narrative takes place in an Arctic base that deliberately (and quite self-consciously) rips off The Thing. Indeed, the entire story is basically a homage to a number of different horror movies, Ridley Scott being the most obvious example – the awakening dream crabs are a cross between the facehugger from Alien and the adult form of the egg that it hatches, with teeth to match. As is now traditional with a new monster under Moffat’s reign, the crabs have a metaphysical twist: they are only active when they’re either observed or being thought about, leading a surrounded Doctor and Clara to frantically screw their eyes closed while Emily shouted “BLINK!”. 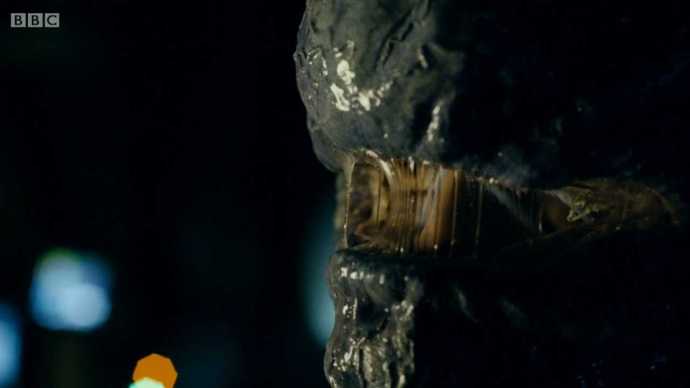 If the crabs are reasonably frightening, the fantasy in which they dump Clara is positively sugar-coated, although this is presumably all for effect. The production team soften the lighting, Murray Gold’s score becomes annoyingly intrusive and Moffat gives us the farewell scene between Clara and Danny that he presumably thought we wanted to see. It wasn’t enough to have them sobbing in a graveyard before he exploded over London; we now get to see Samuel Anderson wearing a Santa outfit (which will give the fan-fiction writers something to do, I suppose). It’s all very tear-jerking, although it’s more about Clara dealing with her grief than actually saying goodbye to Danny, given that she’s effectively talking to a hallucination. The net result is really not like Ghost; it’s more like A Beautiful Mind. (That’s not a compliment, by the way.)

In more quasi-fan pacification, the nature of Jenna Coleman’s hesitancy over her contract with the BBC is handled with one of Moffat’s false endings: the Doctor arrives back at Clara’s house sixty-two years late, the sort of cock-up with repercussions that would make even the Ninth Doctor wince. This is, as it turns out, still Only A Dream, but just for a couple of minutes, we’re led to believe that it’s the end of the road. It’s really an excuse to reverse the cracker scene from last year, and that in itself works quite well – but it’s a shame that the makeup used to age Coleman is so utterly unconvincing, leading Emily to remark “Ooh, it’s Yoda!”. Well, not quite, but Yoda is arguably an improvement.

The remainder of the episode is a bunch of characters that warrant minimal emotional investment, seeing as they are mostly plot devices. Shona is by far the most interesting – clearly potential companion material, presumably in the mould of someone as delinquently troublesome as Ace or Leela. Michael Troughton is as good an actor as his father, but is given little to do except read from an instruction manual and chew up the scenery. Said scenery is admittedly impressive, the closing flyover echoing any number of Christmas classics, while the Arctic base is claustrophobically rendered in muted tones. Likewise, the dream crabs have clear action figure potential, even if – as a friend of mine pointed out – their hosts look they have Brussels sprouts on their heads. 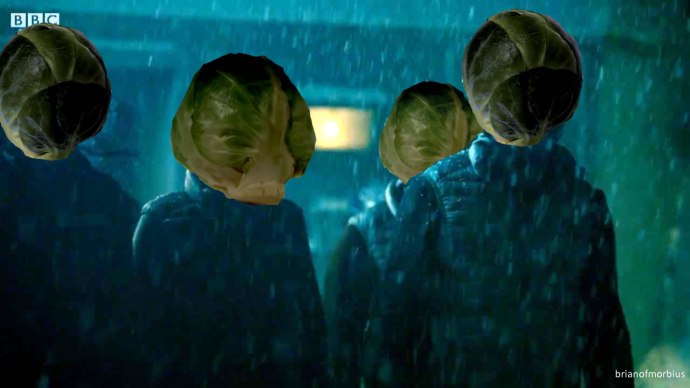 “Oh, not sprouts. I hate sprouts.”
“Oh, will you stop whinging Eddie! Nobody likes sprouts.”
“Then why are we having them, then?”
“BECAUSE IT’S CHRISTMAS!”

The most ridiculous thing to happen in ‘Death in Heaven’, of course (besides the Cyber-Brigadier, which still makes me angry) was the appearance of Nick Frost at the door of the TARDIS. Moffat plays on this during ‘Last Christmas’ by making the entire story one long knowing wink: Santa arrives at the Arctic base just in the St. Nick of time (or not, as it turns out) with an army of slinkies and toy robots, riding a reindeer like the Lone Ranger mounted Silver and handling a tangerine like a grenade. Meanwhile, Starkey has an orange balloon gun. It’s purposely silly, and indeed the appearances of Santa in the episode have a whiff of the absurd about them: Santa the action hero, Santa the gunslinging hero, and Santa the saviour of humanity.

Actually, that’s the problem. Because the presence of Santa in ‘Last Christmas’ becomes something of a litmus test: in other words, as the Doctor assures his companions, they know they’re dreaming because Father Christmas himself is there to put things right. We may assume, indeed, that the entire last scene of the series finale was itself a dream, presumably one that Capaldi had after watching too many Russell T Davies episodes. Somewhere between that first low-angled establishing shot and the final rescue in the snow, we’re told in no uncertain terms that Santa is – at least in this case – a group hallucination made flesh, a gestalt entity that drops out of the sky in what I have no choice but to label sleighus ex machina.

That’s fine. But at the risk of sounding like Mary Whitehouse, has anyone stopped to think about the children? Look, I’m not opposed to the idea of dramatic presentations where people don’t believe in Santa. Miracle on 34th Street constructed an entire narrative around the concept (a reference that Moffat openly admits to, when he has one of the surviving characters unfold a sheet of paper that contains her Christmas TV schedule and the writer’s apparent influences for the episode, presumably to avoid having to stick ‘The works of H.R. Giger and John Carpenter are acknowledged’ in the credits). There are plenty of grumpy people who grew up too fast and become the voice of cynicism in such festive tales, refusing to believe even the evidence of their own eyes.

But here’s the thing: even if I manage to describe the various dream states and layers to my seven-year-old so that he knows whether the characters are asleep or awake (“This is an episode,” said Emily, “that they’re just not going to understand at all”), how the hell do I explain the deliberate fictionalisation of a character he still believes in? Santa’s existence here isn’t just something that’s contested by the stuffy grown-ups before he reads off their Christmas wishes from behind his Google glasses; his status as something we’ve dreamed up to help us is more or less concrete. And no, an ambiguous tangerine on a windowsill doesn’t count.

It’s possible, of course, that I’m going to re-read this tomorrow and decide that I’ve got the whole thing wrong. Even then, the opening scene on the rooftop makes for uncomfortable viewing, with Clara suggesting that her “Mum and Dad” were the ones who delivered presents. I don’t think that’s yet occurred to any of my children, and if the episode had stopped there, with doubts about Santa then quickly rebuffed, then that would have been fine. But then making the whole story about this seems not only unnecessarily metaphysical but also downright unpleasant somehow, with Clara’s final affirmation that yes, she believes in Father Christmas, but that “he looks a little different to me”, frankly a little insulting. I’d accept that our interpretation was perhaps skewed by a cynical take on Moffat’s writing, but an episode of a family show that questions the existence of Santa on so many levels, irrespective of their resolution, seems to be entering dodgy territory.

Of course, the tangerine has two possible meanings, and choosing between them is obvious. Presumably we’re supposed to infer that it’s the calling card for a real-life Santa Claus, because the alternative is another layer of reality: in other words, this is still a dream. It’s far less ambiguous than the ending of ‘Normal Again’,  I’ll grant, and this is ironic given that the dream state isn’t actually as unattractive a proposition as you might think. If nothing else, it would explain why the story was so preposterous and downright confusing.

Come to think of it, can we track the beginnings of the head crabs back to the ending of ‘Kill the Moon’, when Clara telephones the entire planet? Or perhaps ‘Listen’, with its ridiculous Gallifreyan lullaby? Actually, can we just write off the entire last series as a lucid dream and start again from the moment Capaldi staggers out of the TARDIS at the beginning of ‘Deep Breath’? I know I complain about narrative tangents, but to be honest, that’s a twist I could handle.