In many ways, it’s a pain in the arse when Doctor Who is good. It makes it harder to write about it. I seem to do all my best work when I’m criticising an episode for lacklustre pacing, inconsistent or non-existent characterisation or lousy dialogue. This is mostly down to habit. I’ve spent so long wallowing through second-rate stories that the ability to dissect them has become almost second nature, so when something enjoyable comes along, I become well and truly stumped.

‘Flatline’ is one of those stories that probably caused major headaches at the readthrough, because so much of it is visual. From the outset, where a bearded, nameless chap makes a cryptic phone call before vanishing into the floor, the ‘show, don’t tell’ mantra is working non-stop. Despondent-looking murals hang on subway walls. Furnishings bleed and melt into wooden floorboards. Doorknobs flatten and then pop back into existence. The BBC’s audio description unit must have filed for overtime.

It’s telling that the last time we had an episode in which paintings come to life, it was an absolute disaster. It featured a troubled estate, a talented young black artist and a bunch of council workers. It also ended with ball bearings and the Olympic torch, both of which ‘Flatline’ mercifully lacks. Instead we are graced with a tedious exchange about the nature of goodness. In my laundry list of poor episode traits in that opening paragraph, I mentioned lousy dialogue, and it’s a shame to report that ‘Flatline’ has it in spades. It manages when the science takes centre stage, but anything human – and there is, once again, far too much riffing about Danny and Clara – is frankly painful. Based on his performance this week and last, Jamie Mathieson is capable of decent gags but stumbles when it comes to getting two people (human or otherwise) to have a conversation that doesn’t sound like a first draft of a spec script – which, for all we know, is exactly what this was. 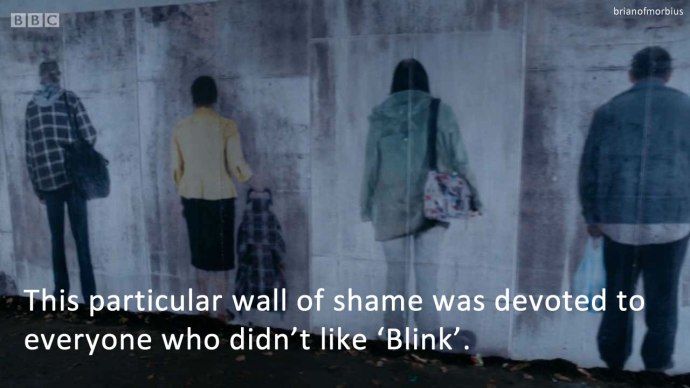 But whereas ‘Mummy on the Orient Express’ had nothing to fall back upon save some pleasant surroundings and an overused monster, ‘Flatline’ has its central premise: people disappearing into the walls. The disappearances on what is presumably a lower-class council estate are largely ignored by the local authorities (this week’s bit of social commentary couldn’t be more overstated if you gave it a fluorescent sandwich board and made it stand on a street corner) and derided by the unpleasant Fenton, a sneering jobsworth who refreshingly lives to the end scene with his nastiness entirely intact. Fenton is there chiefly to give Clara someone to rub up against, but his obvious shallowness is easy to overlook in the wake of an entertaining performance by Christopher Fairbank, famous for Auf Wiedersehn, Pet and for being dangled over the edge of a roof by Michael Keaton.

While all this is going on, the Doctor is trapped inside a shrinking TARDIS – the ‘Logopolis’ / ‘Planet of Giants’ parallels come to an abrupt halt once you realise that it’s only the TARDIS shrinking, and not the Doctor himself. This is basically an excuse for some amusing sight gags, most notably the image of Capaldi’s head pressed up against the undersized door, staring through the fourth wall as if daring you to laugh at his predicament. It echoes the end of episode four of ‘Miracle Day’, in which an unpleasant politician meets an untimely un-end in a car crusher, but this tendency to stare mid-episode would arguably be more effective if (at least in the UK) we weren’t presented with that same pre-episode continuity interruption EVERY SINGLE WEEK. (Those of you watching elsewhere, or on iPlayer, will have no idea what I’m talking about, but anyone who recorded it will be nodding right about now.) The image of the Doctor facing the camera, talking to some unseen adversary (or ally) has been a common sight since the show switched to the single-camera format in 2005, but rarely has any Doctor stared at the audience (as opposed to just past it) as much as Capaldi seems to. He’s probably anxious to show off his eyebrows. 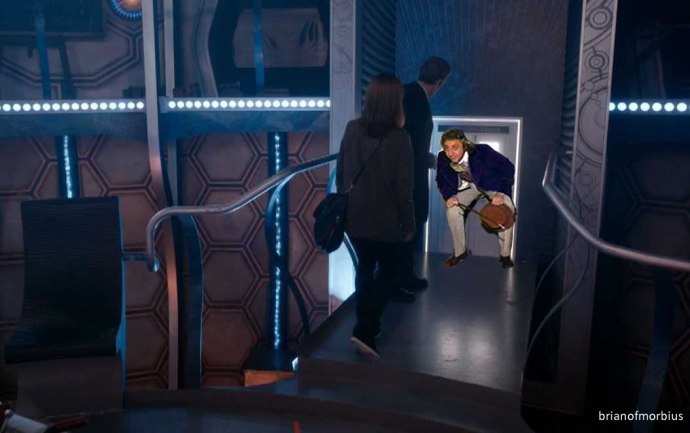 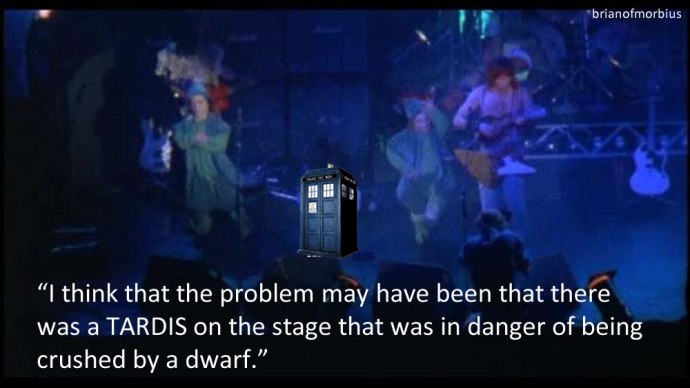 Splitting the two time travellers up works quite well, as it turns out. Whereas ‘The Lodger’ (operating on much the same premise) minimised Amy’s role so that the Doctor could banter with James Corden, ‘Flatline’ subverts things by having Clara ostensibly assume centre stage while Capaldi shouts down a radio mic like Danny Glover in Bat 21. Let no one fool you with this ‘Clara is the Doctor’ rubbish. She’s not. Capaldi is the Doctor, and never allows us to forget it, whether he’s pursing his lips with wide eyes when she says something that sounds vaguely Doctorish, or passing out in the TARDIS when it’s turned into an exact replica of the collectible Pandorica cube you could buy with the series five action figures. The Doctor never allows confinement to stop him being the centre of attention, as is epitomised in the scene where he trundles off a railway line, away from the path of an approaching train, using his fingers. It’s a tense but deeply comical moment, simply by virtue of being so utterly ridiculous, and to his credit Mathieson gets the Addams Family gag out of the way before we even have a chance to think of it. 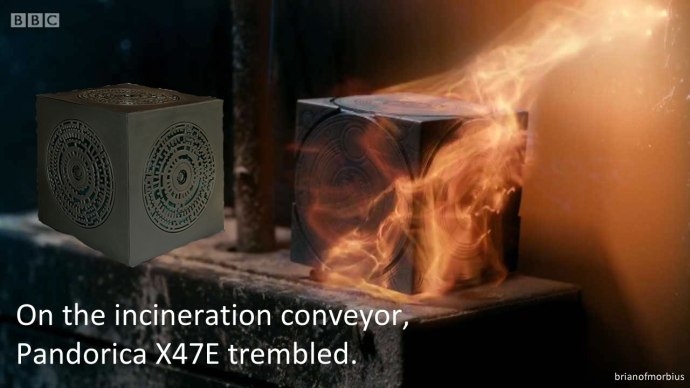 In terms of narrative and setting, this week’s episode pays obvious homage to the satirical Flatland, or at the very least one of the subsequent film adaptations, and the relatively foggy explanation of the unnamed alien race’s origins or motivations leaves the story open-ended for a Twelfth Doctor novel at some point (in TV terms it’s a one-story idea, and I have a feeling Big Finish won’t touch it with a barge pole, even if they can get the rights). We know as little about the Killer Graffiti by the end as we did when they claimed their first (on-screen) victim, but the Doctor’s futile attempts to communicate with them before he ultimately destroys them echo, strangely enough, the moral appeasement of Bill Pullman halfway through Independence Day, when a mental link with the invading aliens leaves him with the knowledge that “they’re like parasites”, and the moral justification to launch all out war. When the Doctor steps forth from his rejuvenated TARDIS into the tunnel it’s a powerful moment, unfortunately undermined by some quite unnecessary monologuing, but it wouldn’t be Doctor Who without The Big Speech. Even McCoy had his share.

Besides, those aliens are downright creepy. They look like TV distortion – for a moment I thought tonight’s low atmospheric pressure had knackered the signal, but a glance online tells me that no, it’s a deliberate design feature. They are wordless, relentless, and almost featureless. Stylistically they vaguely resemble the scramble suits used in A Scanner Darkly, but in science fiction it seems there is nothing new under the sun, and I’m prepared to let that go. And they presumably had a generation of children glancing uneasily at the pictures on their wall tonight, waiting perhaps for the eyes to move like in Scooby Doo, and perhaps that’s as it should be. 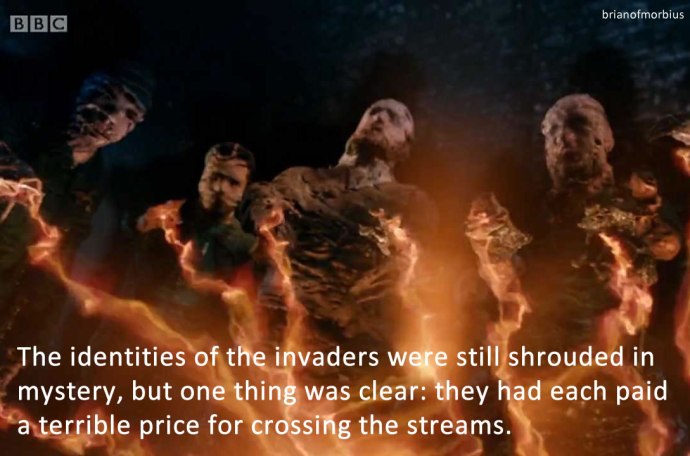 It’s ironic: an episode of Doctor Who that deals with life in two dimensions, and that manages to be somehow more solid and substantial than almost anything else we’ve seen this series. Oh, there was moralistic whinging about whether victory ought to be celebrated in the wake of so much death, a conversation that was presumably there for the kids. There was the Clara and Danny thing. And there was the unnecessary inclusion of Missy, who cannot possibly be interesting, whoever she turns out to be. And if you step back from the visuals and examine what was going on the whole thing really was a little bit pointless. But when a story is as fast-paced, visually appealing and downright fun as ‘Flatline’ was, you find that the superficial stuff actually matters far less than perhaps it ought to. The other week I said that you could either write a decent domestic drama or an outright scary story. Both Mathieson and Moffat still have some way to go to come up with anything about the Clara / Danny / Doctor triangle that’s going to make me interested. But they came up trumps with the monster this week, and delivered something that was elegantly directed, decently performed, and supremely entertaining. And for that, I’m very grateful. 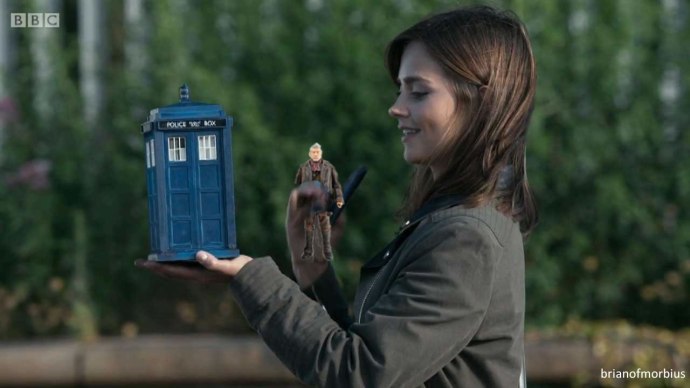