God is in the detail (part xviii)

Rather late with God Is In The Detail this week – it was our tenth wedding anniversary, and some things are just more important than Doctor Who. Besides, it gives me an excuse to show this.

‘Kill The Moon’ was a tricky one to do, largely because quite a lot of it is set on the surface of the moon, where there is nothing of any interest to look at. However, inside the Mexican base there are numbers. And we love numbers, because they show us the HIDDEN SECRETS THAT ARE IMPORTANT TO THE ARC. 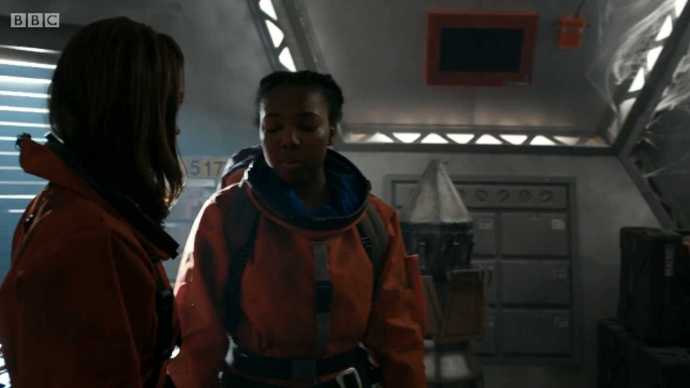 Ignore the massive white pencil next to Courtney’s left shoulder and have a look at the 517 (printed, rather bizarrely, on what seems to be a car registration plate). 517 refers to the last episode of ‘The Creature From The Pit’, starring the Fourth Doctor, whose IMMINENT RETURN we’ve discussed in some detail a few weeks back. However, season 5 episode 17 also refers to the first episode of ‘Enemy of the World’, in which the Doctor plays on a beach in his long johns and tries to build a sandcastle. (I’m not kidding, this really happens.)

The enemy of the world in this instance is clearly Clara herself, who saves the moon at the possible expense of humanity – and the story’s finale and Salamander’s ultimate fate (which I will not spoil) UNAMBIGUOUSLY mirrors what’s going to happen to Missy. Both stories feature actors from Emmerdale. The two also share an uncanny duality in that ‘Enemy’ was written by a man named David (Whitaker) under the direction of a script editor called Peter (Bryant), while ‘Kill The Moon’ was written by Peter (Harness) under the direction of David (P Davis). In the meantime, the whole thing calls to mind the alternative poster art that Gareth and I constructed for ‘Enemy of the World’ at the tail end of last year.

Now have a look at this intense conversation with the Doctor and Clara. 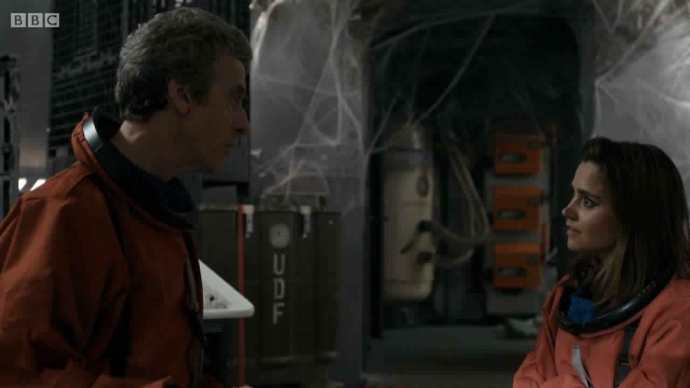 In the background you’ll see the letters UDF. All innocent enough until you do this.

Regular viewers will recall that the concept of fans has arisen twice in recent years – possibly more, but there are two that are of particular significance. In the first instance, the Fifth Doctor casually dismisses his successor as ‘a fan’ in ‘Time Crash’ – a story that indirectly references Blinovitch (mentioned in ‘Kill the Moon’) by having a man interact with his own timeline. The second obvious example is ‘The Unquiet Dead’, in which the word is misconstrued by a Victorian gentleman who asks the Ninth Doctor “How exactly are you a fan? In what way do you resemble a means of keeping oneself cool?” The gentleman in question was Charles Dickens. More on him later, although if you were watching carefully, you may know what’s coming.

More numbers now. Look. It’s the final countdown. (And you didn’t say that, you sang it.) 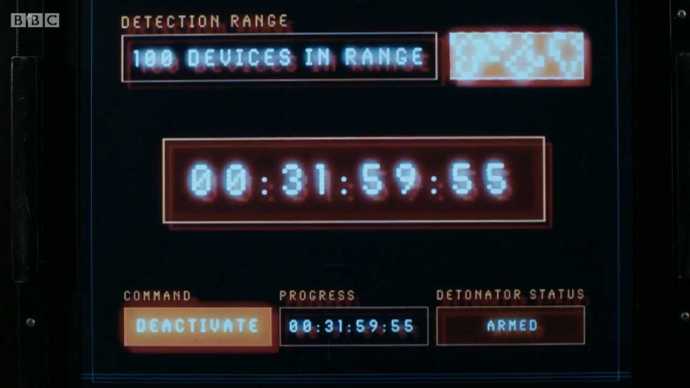 If we take the seven lines of dialogue being uttered at this moment during the past seven episodes, we get the following:

“It says lunch, but not when and where.”
“How?”
“Such a pretty thing. What a queen she would have made.”
“Do me a favour. Take my advice. When you get home, stay away from time travel.”
“My face fits. Now if you’ll excuse me, I must take the Teller to its hibernation. You two, dispose of our guests.”
“If it comes back Thursday night, are you sure about that? ‘Cos you said the chronodyne is unstable.”
“We just need to make up our minds, that’s all. Well, you know him.”

“We just need to make up our minds, that’s all. Well, you know him.”
“If it comes back Thursday night, are you sure about that? ‘Cos you said the chronodyne is unstable.”
“My face fits. Now if you’ll excuse me, I must take the Teller to its hibernation. You two, dispose of our guests.”
“Do me a favour. Take my advice. When you get home, stay away from time travel.”
“Such a pretty thing. What a queen she would have made.”
“How?”
“It says lunch, but not when and where.”

The solution of this mystery is clearly pending, with its significance only fully revealed when we look at the series as a whole, but clearly lunch is going to be involved. Presumably sandwiches.

Now, here’s another conversation, this time between the Doctor and Lundvik.

Notice the Spanish writing on the container. ‘FILTRACION DE AGUA’ can be rearranged to form, among other things:

Never mind the references to the contemporary writing style, and ‘The Next Doctor’ (that last one) – we’re back with the Dickens again. However, more significantly, it can be rearranged to form ‘Clara, unified goat’, which suggests that we’re CLEARLY not done with the impossible girl timeline fracture story yet – except that this time it’s going to involve farm animals. Well, she was in Emmerdale. 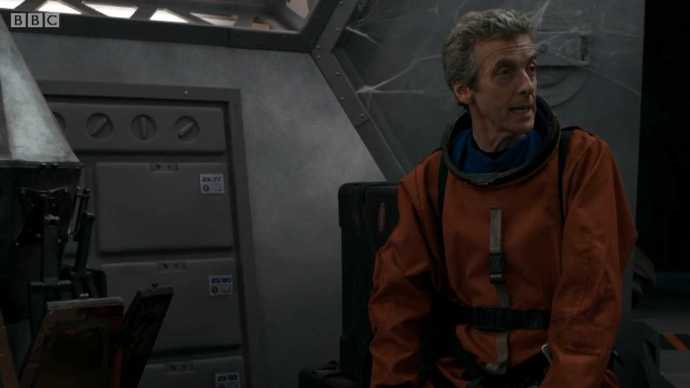 In which, just behind the Doctor, you can see 23/77 and 23/80. The twenty-third episode aired in 1977 is the first episode of ‘Image of the Fendahl’, which features a supposedly shattered planet stored in a Time Loop – a clear reference to an episode we mentioned above.

1980 is a little more difficult to establish, because strike action at the BBC meant that one story was unaired, and thus the number of broadcast episodes stops at eighteen. However, if we take into account the number of scheduled episodes, allowing for a parallel timeline in which ‘Shada’ was broadcast, then episode 23/80 was supposed to be episode three of ‘State of Decay’, CLEARLY and UNAMBIGUOUSLY referring to the moon’s imminent collapse here.

There’s more. You’ll recall that episodes in the First Doctor’s run have specific titles, loosely collected under the story titles that were later assigned. (Hence, the first four episodes that detail Ian and Barbara’s adventures with the Tribe of Gum are collected under the title ‘An Unearthly Child’, which actually only really refers to the first episode of the story.) Taking the numbers 23, 77 and 80 and applying them to actual episode numbers in a chronological sequence, we come up with stories from ‘The Keys of Marinus’, ‘The Chase’ and ‘The Time Meddler’. However, it’s the episode titles themselves that prove most interesting:

Now, watch what happens when we rearrange all this.

“Of the decision? A screaming battle of wits. The jungle planet.”

Which describes that last scene in the TARDIS, and also serves as a CLEAR INDICATION that we’re going back to Deva Loka, WHICH THE FIFTH DOCTOR VISITED in ‘Kinda’, and which we mentioned the other week. That’s assuming, of course, that Clara manages to mend the bridges she’s burned with the Doctor. Perhaps she just needs time to think, in her classroom. 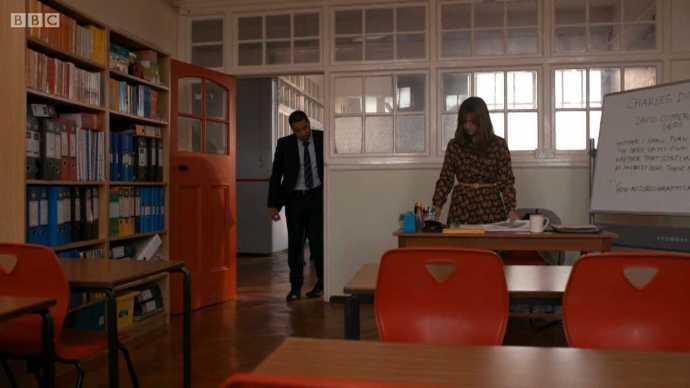