God is in the detail (part xvi)

Right. I’m running a little behind with these, so let’s crack on, shall we?

Tonight, we’re looking at ‘Time Heist’, which was a visual feast, rich with detail. We will hone in on just a few of the choice moments and determine those little bits which were VERY IMPORTANT TO THE SERIES AS A WHOLE.

First – here’s Psi, in the vault in the heart of the bank. 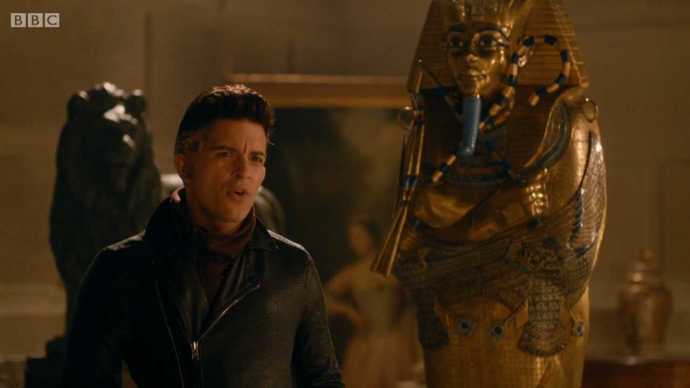 We will come back to this vault later, but notice the painting in the background – out of focus, but containing an interesting large-busted woman in a pose not dissimilar to the one that Jenny is doing here, in ‘Deep Breath’.

Take a look. Don’t linger too long, of course, because this is a family show. The pose is reversed, which indicates MIRRRORS. In ‘The Family of Blood’, the Tenth Doctor traps Sister of Mine in a mirror – every mirror, in fact. Mirrors also figure heavily in the finale of ‘Kinda’, which we didn’t quite reference in the deconstruction of ‘Into the Dalek’.

But the Tenth Doctor has described the Fifth Doctor, on at least one occasion, as “my Doctor”, so it’s clear that there is a link between them, and that both are fond of mirrors. CLEARLY we are about to enter some sort of mirror universe where everything is the same but reversed: The Daleks are benevolent scholars, Gallifrey didn’t get destroyed, and Noel Clarke is capable of acting.

Now let’s have a look at the Ice Warrior on display here.

Innocent enough, yes? No. Because the numbers are important. Oh, so important. We can break it down like this.

So now you know. Never mind the fact that Janet Fielding was recently observed on set. SHE’S FILMED A CAMEO.

Now – here’s the lock sequence that Psi was trying to break while Clara was being chased by the Teller. 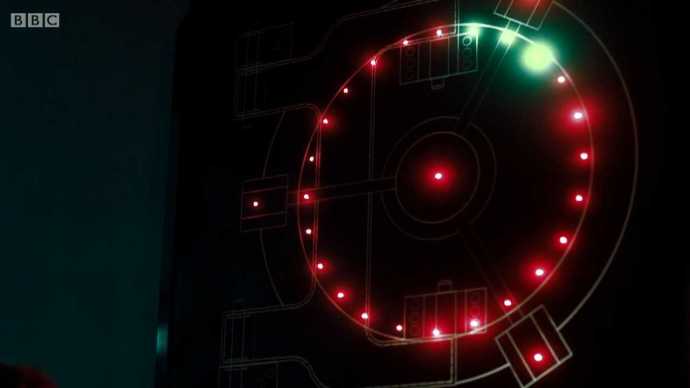 You will observe the series of 24 lights, which CLEARLY AND UNAMBIGUOUSLY refers to the Doctor’s various incarnations – or, more specifically, the actors who played them. The first three, highlighted in green, refer to Hartnell, Troughton and Pertwee, all of whom are deceased. The remainder – from approximately two o’clock round in sequence – are Baker, Davison, Baker, and so on, all the way round to the top. The use of 24 is not a coincidence, but a subtle foreshadowing from the BBC as to how many Doctors we will get through before they knock the show on the head.

You’ll note two things about this. First, if we assume that the first red marker refers to Baker, Davison is lit very brightly, CLEARLY indicating another on-screen appearance from him, alongside Janet Fielding. This assumes, of course, that we do not include Hurt among the central ring, which makes sense given that he did not intially refer to himself as ‘Doctor’ and is thus unnumbered. You will also notice that the positioning of the Tenth Doctor contains another red dot on the outer rim, clearly alluding to his dual regeneration and the meta-crisis Doctor. The War Doctor is thus positioned in the centre, at the eye of the storm, while the Valeyard sits out on the fringe, at about nine o’clock. Clearly we’re not done with him yet.

And yes, there is another dot, just out of shot and positioned alongside Troughton. Well, you have to stick Peter Cushing in there somewhere.

Back in the real world, we have Clara’s mysterious card.

251 and 339 both refer to stories in the classic run featuring assorted Time Lords – episodes from ‘The War Games’ and ‘Frontier in Space’ respectively. P was the medieval number for ‘400’ – the approximate age gap between the War Doctor and the Eleventh – while V clearly alludes to 5, and the Fifth Doctor. Meanwhile, if you add the numbers 251 and 339 together, you get 590, which refers to episode three of ‘Mawdryn Undead’, in which the despicable Mawdryn pretends to be a new incarnation of the Doctor, only to be ousted by – yes, that’s right – Peter Davison. And once again, THIS CANNOT BE A COINCIDENCE.

Now look at this.

The Brigadier, who starred in ‘Mawdryn Undead’ also stars in ‘The Ambassadors of Death’, which features characters called Cornish, Wakefield and Rutherford. You will note that while the Doctor is busy opening box 251 (‘The War Games’), Clara’s right hand is poised over box / episode 265 (‘The Ambassadors of Death’, part one) while her left is pointing at 271 (‘The Ambassadors of Death’, part seven). Conclusion: not only will Jemma Redgrave be returning as the Brigadier’s daughter Kate Stewart (which we know for a fact), but the story will be set in the Rutherford Appleton Laboratory, in Oxfordshire, which is coincidentally almost equidistant (by a matter of seven miles) both from Wakefield in Yorkshire and the Cornish border.

But that’s not all. Let’s go back to that vault.

The sarcophagus is a CLEAR AND DIRECT reference to the upcoming ‘Mummy on the Orient Express’, while the perfectly preserved lion statue obviously refers to ‘The Crusade’, which is clearly one of those stories that Phillip Morris has recovered, but which the Beeb are keeping under wraps until the Isis thing has blown over. However, it’s the golden sculpture of what looks like the London Eye that I want you to look at, because if it is the London Eye, and it’s in gold, then it’s a clear reference to the Golden Rose, given the landmark’s prominent usage back in the series 1 opener in 2005 – particularly significant at Easter, when the episode was first aired. Clearly we are destined to see the resurrection of a prominent figure, thought dead and gone, having given his life for others. Never mind that Jesus Christ was the son of David. Or, if you like, a DAVISON.

Of course, it could just as easily be a reference to the Rose d’Or, which Doctor Who has never won. But I like my version better.

One thought on “God is in the detail (part xvi)”