So what have I been doing when I’m not either writing reviews, refining satirical conspiracy-laden theories about the arc or convincing the Metro readership that Classic Doctor Who was better?

Well, reading the news. Doing any sort of journalism, however low-key, requires a finger on the pulse. But even if I’d gone dark, it was hard to miss the Apple iPhone 6 Songs of Innocence debacle. 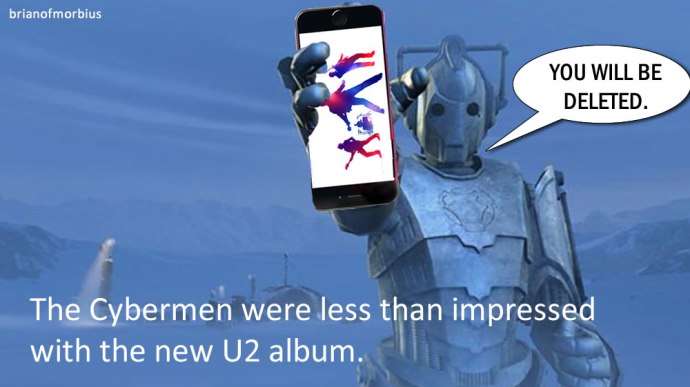 I also spend a lot of time answering email, and summarising plot threads to Gareth, who has yet to watch any of the new series on the grounds that “You aren’t exactly selling it to me, you know”. It’s true that the quality level has been variable: patches of good and patches of appalling, with one entire episode (‘Into the Dalek’) that lies squarely in between. Capaldi is great, but the scripts are not. I more or less accept this as par for the course these days; I can’t help feeling we’re all marking time until Moffat steps down and Gatiss takes over as chief writer – a prospect which, thanks to his recent output, actually no longer appalls me as much as it once did.

When New Who is proving to be a less-than-fulfilling experience, I go back to the old stuff, which isn’t always a good thing. The other week, for example, we watched ‘The Two Doctors’, which is (as Gareth says) “a tremendous waste of Patrick Troughton”. The basic problem is that there is no story: it takes two and a half hours for the Doctor to have two or three one-minute conversations with his past self, visit Seville and tussle with some comically tall Sontarans. The Androgum thing is a good idea that never convinces, because they’re so downright irritating. On the plus side, Colin Baker does manage to take Nicola Bryant on an early tour of the Google server farms. 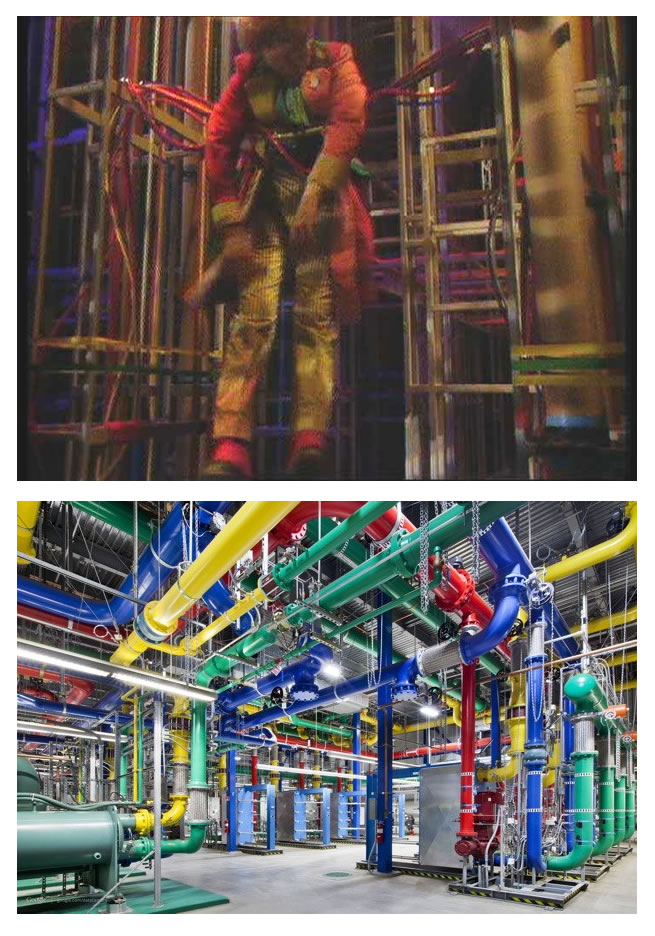 Google actually figures – in a manner of speaking – in ‘The Ice Warriors’, which I finished this morning, and in which a group of isolated humans have become so reliant on technology that they are incapable of rationalisation or even thinking for themselves, relying exclusively on technology. When it’s suggested that Director Clent forego the I.T. consultation process and actually make a decision, he freezes and panics. In the 1960s the idea of a supercomputer that could answer any question and suggest a course of action for any situation was still buried deep within the realms of science fiction – but as time passes, and dependency on the internet and the cloud increases, I can’t help wondering if we’re breeding a generation who’d rather use a search engine than cultivate a thought process. Why bother finding out what happens when you drop Mentos in Diet Coke when you can just see it on YouTube?

It needn’t go this way, of course. It’s just a question of encouraging independent thought, which is what I try to do when I tell my children not to believe everything they read. We try and bring a little philosophy into the dinner table conversation. Occasionally this backfires. At Beaver camp earlier this year I spent half an hour in a forest clearing trying to explain the door riddle to Thomas, after he’d seen it in ‘Pyramids of Mars’. In the end I found three trees in a line, and took it in turns to be the guards in front of imaginary doorways. The conversation lasted most of the evening, on and off, in between the games of snap and the s’more session round the camp fire. What I should have done, of course, was this. 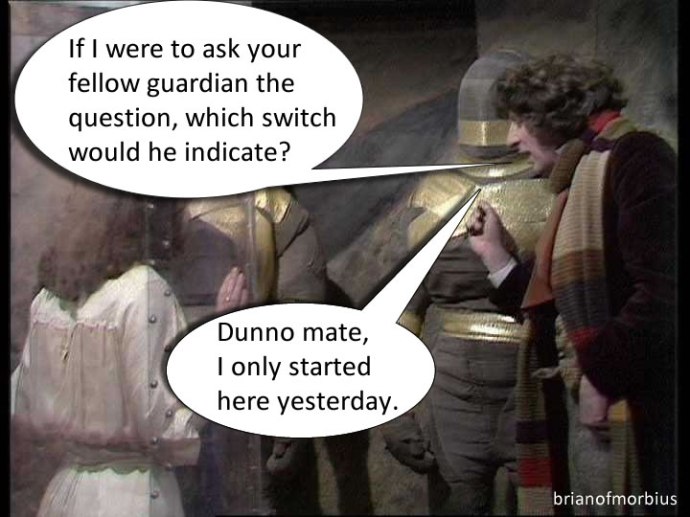 My parents have just got back from a holiday in Norfolk – a place that forms what may just about be my first memory, besides the one that I wrote about way back in 2011 when I started this blog.

“This,” said my father, “was in a garden just up the road from us.” 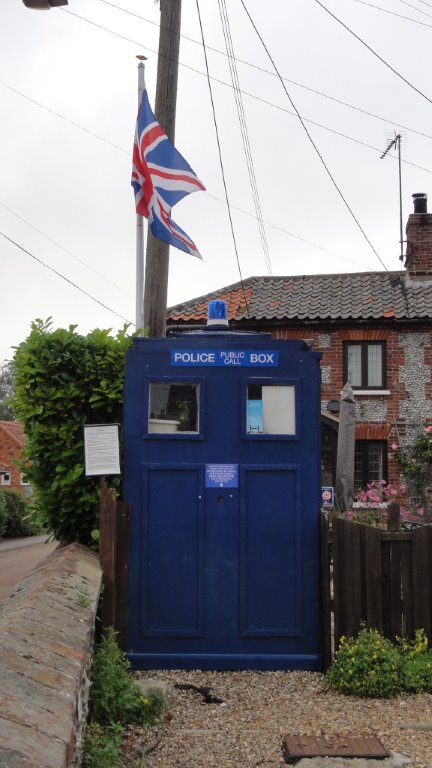 (The TARDIS in question is, I’m told, in Stiffkey, near Wells-on-sea.)

“We knocked,” said my father, “but the Doctor was out”. So they didn’t see inside, although if they had, it might have looked like this: 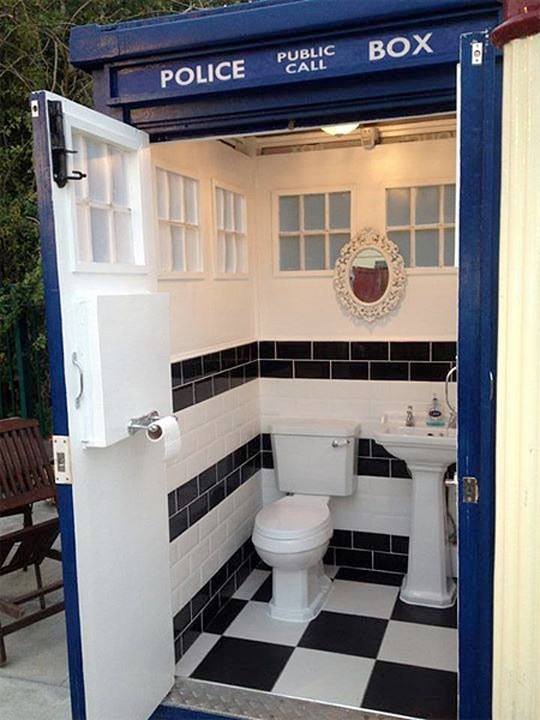 Edward, meanwhile, has developed the annoying habit of pulling any DVDs he can reach off their shelves, spilling them on the floor. This means that the carpet of my study is at this very moment covered with plastic boxes. Unfortunately the only ones he can reach are the Doctor Who discs, because I like to keep them close to hand, and THEY HAVE TO BE IN THE CORRECT ORDER. Thus, in the process of returning them to their rightful places these last weeks I have become highly prolific at the story sequence for Baker through to McCoy, and could probably tell you them by heart.

But here he is, embroiled in our now daily ritual that is the Touching of Peter Capaldi’s Head. 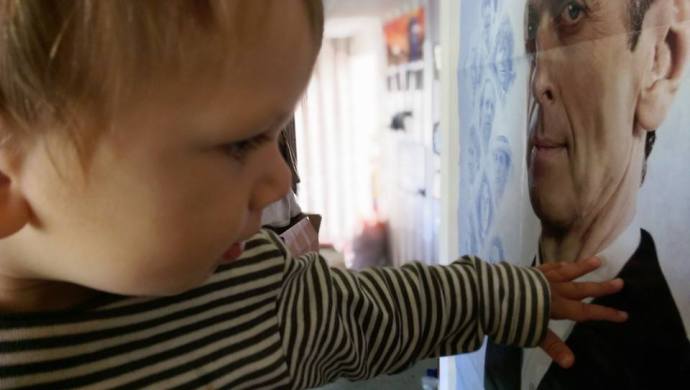 The other day I put on the recon of ‘The Wheel in Space’, and as soon as he heard the theme music, he clapped. I have trained him well.