Confessions of a crap artist

Even when there’s nothing on TV and precious little in the news, we still manage to find ways of saturating our lives with Doctor Who. This is not necessarily a bad thing. It just means that you get stared at in the street, at least when you’re wearing the fedora and striped scarf (in June), and conversations with more sane, less obsessed people frequently end with the word “Riiiiigghhht….”, Doctor Evil style. I burned all my bridges with normalcy and adulthood long ago. Or, to quote C.S. Lewis, “When I became a man, I put away childish things, including the fear of childishness and the desire to be very grown up.”

To start: further adventures of the Dinopaws troupe.

(This comes hot on the heels of the video I did last week, and the closing episodes of ‘Earthshock’. It seemed such an obvious joke – so obvious, of course, that the BBC got there years ago with Episode Five, but anyway.)

I completed that video to discover that Edward had regenerated. 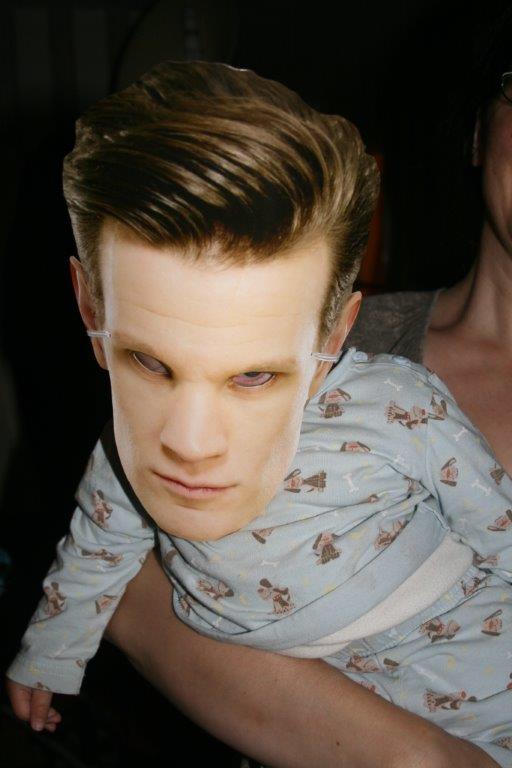 Emily did this one evening and it damn near gave me a heart attack. It’s one of those freaky pictures you share with no one, which is presumably why I’ve stuck it on a blog that no one reads so that the whole world could theoretically see it. I would add that he is grinning underneath there. Honest guv.

Meanwhile Thomas has been reading the further adventures of Biff, Chip and Kipper, in a series for older readers with more time travel and an ongoing storyline. Oh, and this.

Never mind the fact that Mr Mortlock’s first name is Theodore, and ‘Theodore Mortlock’ is an anagram of ‘The Elk Room Doctor’. Which I don’t think can be a coincidence.

Today I went to a carer’s social event where we got to decorate mugs. I confess I was dreading it. I have become something of a hermit these past six months, having been surrounded by people all day every day for years, and I have to say that solitude suits me. Maybe it’s a sign of age, but I am beginning to find people irritating. The world is really just an extension of Facebook, replete with the same superficiality. I have decided that Looking Up gets me nowhere; I just wind up making eye contact with people I don’t want to see.

“Get out of the house,” urged Emily. “Do something.” So I did. And besides, you know, mug decorating. Not to be sniffed at. I’m rubbish at drawing, but give me a picture to copy and I’m marginally less rubbish.

This has been a good day.

2 thoughts on “Confessions of a crap artist”