Assorted friends of mine are renowned for their ‘Emergency lack of party’ parties. These semi-impromptu events are basically excuses to pig out on Pringles and consume copious amounts of alcohol, on the pretext that far too much time has elapsed since any suitable occasion arose that granted you the opportunity. In other words, the calendar is bare, so we might as well empty the cupboards as well.

This was an ‘Emergency lack of video’ video. It’s been a while. The novel is moving full steam ahead and I seem to be producing quirky Photoshopped JPEGs almost daily, but the editing software has remained untouched. Various big projects are sitting in the sidelines, half done, largely because of all my talents, procrastination is in a league of its own. I’ll measure just how far ahead of my other abilities it actually is, when I get round to it.

In the meantime: Jean Claude Van Damme stood between two trucks last year and did great things. For the sake of simple comparison, here’s how it was.

As a parenthesis, those of you who were reading this blog in November may recall that Joshua was keen to emulate the stunt in the kitchen, using Morbius: 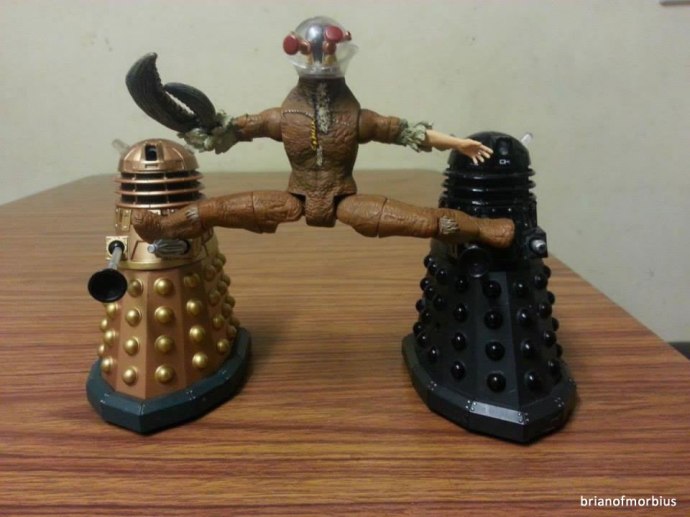 In taking it a step further, the Eleventh Doctor was the obvious choice. This has nothing to do with his gravitas or ability to make pretty speeches that up the Wikiquote hit counts. It’s simply because of all the Character Options five inch figures, his legs are by far the most pliable. You can’t quite stretch them out at ninety degree angles, as you can with Morbius, but it’s a close run thing. This means that I could feasibly take the Eleventh Doctor and make him look like he’s humping our River Song doll, if I were so inclined. Not that I’d do that. Honestly, that would be sick, and I don’t mean that in the new, trendy way that you kids mean it. (A clear sign of ageing is when you read YouTube comments for a video described as “well sick”, and find yourself thinking “I don’t see why; I thought it was in perfectly good tast – ah.”)

It occurred to me from the outset that this was going to look rubbish. For one thing, I would have to film it live. I knew that trying to adjust the Daleks and Doctor step by step for stop-motion animation was just going to end in disaster, however much sellotape I used. And there was no other way of adding the swirling vortex effect, which is a clean title sequence ripped from YouTube and played back on our lounge TV. At the risk of creating a rod for your own back, having the Doctor do a stunt like this in the time vortex seemed the obvious next step up from having Chuck Norris do it with a plane. (Yes, I know it’s fake, but he still won the internet, or at least the creative team did.)

I framed this little concoction within the context of a special effects budgetary restriction, because that was the only possible way I could upload it with any sense of dignity intact. I mean, it’s all over the place. You can’t really see any of this, but I was leaning forward with the Flip camera – which wouldn’t focus properly on the Doctor’s face because of the lighting conditions in the worst room in the house to shoot or photograph anything (but nonetheless the one where the TV happens to be). I did it at night, convincing myself that natural light would just diminish the time corridor effect on the screen, but really it’s because I’m impetuous and impatient. Then I tilted the camera back, trying hard to rock it slightly to emulate (or at least imitate) the motion of the original, and then tried to tighten the legs of the tripod without knocking the thing over, and then pulled the Daleks from either side with pieces of string. The Daleks moved at different speeds because one of them is heavier than the other, so I had to improvise: in the final take they were perched on impromptu Lego trolleys that  were stood on a book, in order to get the proper height. Despite trying to do them both at the same speed, I overcompensated on the gold and it tipped on its side, to slightly comedic effect. While all this was going on, Emily was looking in at what I was doing, hand on hips, shaking her head with an expression that read “And to think I married a sane person once”. And I knew this WITHOUT HAVING TO EVEN TURN AROUND.

So the effect is…urrrggh. But hopefully the audio – which is if nothing else reasonably authentic – makes up for it a bit. That was, at least, quite fun to put together and edit. The rest of it wasn’t. Trying to fix frame rates when you’re encoding video footage of a TV or computer screen is a living hell. But at least something got created, eventually. For that, I suppose we should be grateful.

Now, where did I put that River Song doll…?