Voyaging tonight into the totally random, here is our Doctor Who figure collection, as at January 2014. 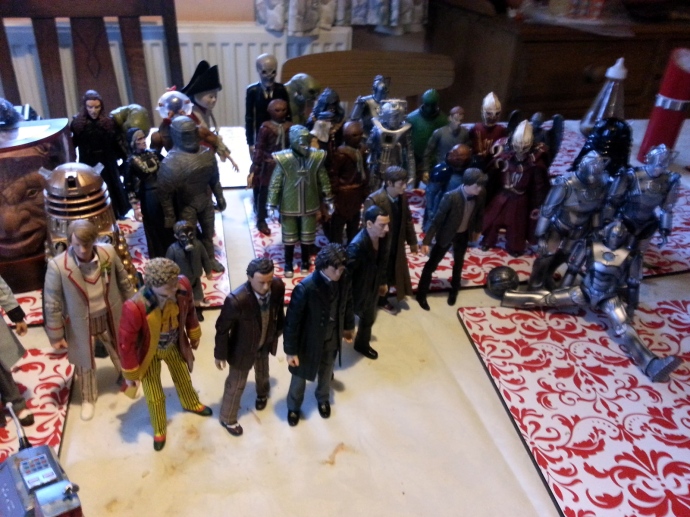 The Fez Doctor (there’s a Fez Doctor! THERE’S A FEZ DOCTOR!) is the most recent addition, but it must be said that I am extremely pleased with this lot – a purchase back in September – even if they did cost me the better part of sixty quid.

Because, you know. Four characters from four fantastic stories, and two that saw at least a couple of outings, and who are far more convincing in their original form, as you will know if you have seen ‘Cold War’. (And if you really think the 2006 Cybermen were more frightening than the ones they used in ‘Earthshock’, I don’t want you reading this blog. Go on. Scat.)

I was procrastinating the other afternoon when I took this lot, reluctant to start tidying the house after the seasonal maelstrom on the grounds that it’ll become instantly untidy again. So I spent a good twenty minutes putting the entire collection into chronological order – in other words, the order in which each figure first appeared in the show.

Start at the back. And this is my order, which means it’s a bit tenuous. That’s why the middle-aged version of Sarah Jane doesn’t appear until the series two set, while the Dalek placing is all over the shop. And yes, there are probably other mistakes. And no, I’m not doing it again. I have to vacuum.

We spent much of Christmas revisiting Classic Who – Thomas and I have watched ‘Spearhead From Space’ and ‘Terror of the Autons’, in single sessions for each story, which for him is nothing short of miraculous. All the same, I think certain people within the family need a little educating. Daniel came to me the other day carrying this: 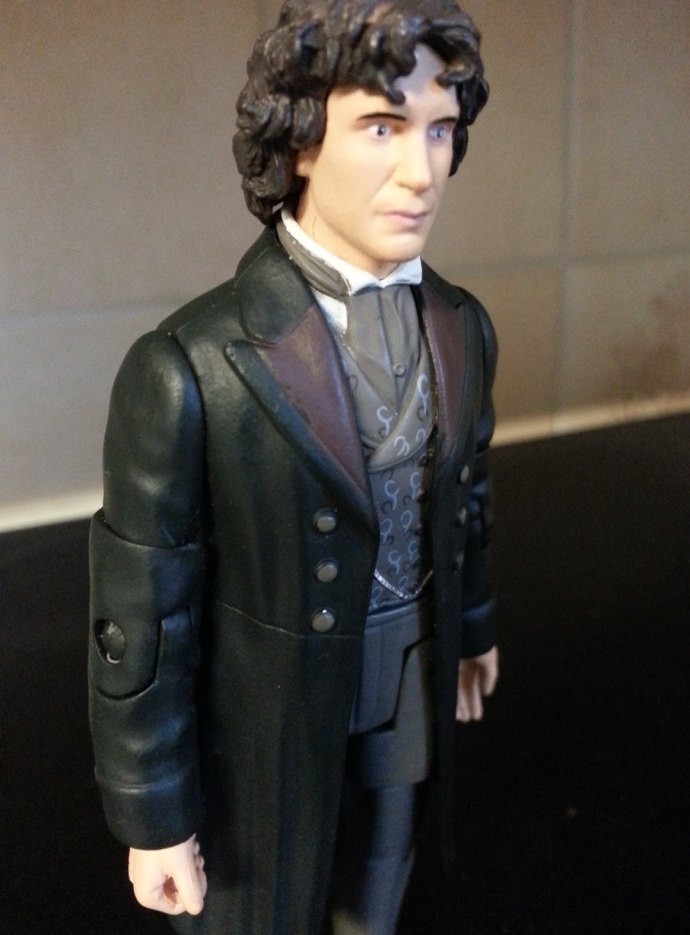 “Daddy!” he said. “It’s Andy from CBeebies, in A Christmas Carol!”

And it’s true, you rarely see them together.

A friend of mine said she showed the Eighth Doctor action figure to her son, who gave her an identical response. “We are utterly failing in our mission to indoctrinate our children!” she said. “We must try harder!”

She has a point, although it’s not for lack of trying on my part. It doesn’t help that Daniel is notoriously spooked by anything scary, which is reasonable behaviour for a four-year-old. The scene with the doll in ‘Terror of the Autons’ passed more or less without incident, and he even enjoyed the death by plastic chair, but when Pertwee and Manning came face to un-face with those plastic policemen he ran straight out of the room and refused to come back in until UNIT had resolved the situation by doing something useful, which of course took an awfully long time.

And then there was the day we tried playing the DVD Board Game. “It’s fine,” I’d said to Daniel. “It’ll just be clips. Nothing scary. You can play it with us. Now, stop hovering by the door.”

And, of course, this was the first clip that came up.

There followed a series of wails and ear-piercing shrieks and I spent ten minutes trying to calm him down. For a moment or two, it was like ‘Dragonfire’ had never happened and Bonnie Langford was sitting in the front room.

In any event, I pointed out to Sally that any sort of TV indoctrination involving the Eighth Doctor would involve watching Eric Roberts foul up the Master even more than John Simm eventually did, so it’s a fine line to walk. And as much as I’m enjoying this little delve into the past while we wait nine months for Peter Capaldi to start being heroic, I don’t think I’m quite ready for that “half human on my mother’s side” scene just yet. We may just go back to the Master. The real one, I mean. It’s far more fun that way.